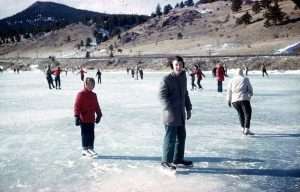 A little comic relief was provided by Pat Taylor last week when she popped into the office. Hearing flood predictions on radio and TV, she wanted to make sure that not only was she prepared, but was appropriately attired to offer her timely suggestion on safety. She is modeling her own special “Mae West,” a la innertube. Needless to say, her advice was greeted with laughter and appreciation by not only the staff, but startled tourists. Even though the flood warning was for 8,000 feet and below, it seems Taylor is a big believer in “being prepared.” After all, Black Hawk is only 8,042 feet. Thanks for making our day! Later in the day at least one of our Register-Call staff was wishing that she had brought Taylor’s innertube with her. It would have been helpful in navigating the flooded streets she encountered on the way to the press.

Miss Jennie Mechling and Miss B. Erickson of Denver were Saturday visitors with Mrs. Luella Fritz. Jennie is recuperating from a broken foot as a result of a fall at her home.

Several times the M.K. Persons have had evidence of a bear around their house on Smith Hill. Last Wednesday night they heard a noise, looked out and saw the bear at their refuse can. Even with the yard light turned on, and the noise of pounding on a pail, all failed to frighten the bear and it didn’t leave until it finished the tidbits in the can.

Miss Carol Kent is here for the summer and will work at Ye Old Fashioned Coffee Shop in Central City.

Died: While we were on the second run of the Register-Call last Wednesday, we were informed of the sudden death of Andy Eccker of Black Hawk. We immediately inserted the announcement of his death, which was published in one-half of the remaining papers, and consequently only half of our subscribers received the announcement of his death. Andy was stricken early Wednesday afternoon at the Colorado Sierra filling station, owned by Victor Braecher, where he had been called from Black Hawk to repair a car. After completing his service, he was drinking a cup of coffee, when he collapsed and fell to the floor, dying instantly. He was born in Gilpin County at the Eccker Ranch about four miles from Rollinsville, spent his teen years operating the place, and in 1948 he and his wife Grace established the A & G Garage in Black Hawk. He was an Alderman on the City Council of Black Hawk for many years and was 56 years of age. Funeral services were held Monday at the Methodist Church in this city under the auspices of the local Order of Elks and the Masonic Order of Black Hawk, with interment in Dory Hill Cemetery. He was a member of the Black Hawk Council, the Elks Lodge of Central City, the Blue Lodge, Chapter and Commander of the Masonic Order. He is survived by his wife, Grace; two sisters-in-law, and a niece and nephew. Our sincere sympathies are extended to the bereaved.

Mrs. William Mitchell Breed, of Boston, arrived on Sunday on a visit with her parents, Mr. and Mrs. H.H. Lake.

Mr. Amos B. Clark came up from Denver Saturday afternoon, returning Sunday afternoon, accompanied by Mrs. Clark and son Amos Jr., who had been visiting her parents here, and Mrs. G.M. Laird, who will visit them in Denver for a few weeks.

Fred Bowden and family motored up from Denver on Sunday and enjoyed the day at Cold Spring, where they spread their lunch under the pines.

Mr. V.C. Herrin, of Idaho Springs was over to Central the first of the week. He had just returned from Tucson, Arizona, where he spent the winter months recovering from a severe illness, and was greatly benefitted by the change.

Mr. Lester Bridaham, of Denver, accompanied by Miss Anne Matlack, of Longmont, and Miss Olga Cosgriff, of Denver, made this office a pleasant call on Thursday last and spent several pleasant hours looking over the files of the newspaper of former years.

Died: At the S.E. Pearson’s Ranch, on Smith Hill, June 17th, 1931, Clarence E. Anderson, aged 71 years. Deceased was a single man, and had no known relatives residing in this vicinity. His funeral took place today, with burial in the City Cemetery.

Miss Janette and Wilfred Fullerton, of Denver, spent Tuesday and Wednesday in this city, and were the guests of Mr. and Mrs. G.M. Laird and family.

Miss Electa, the nine-year-old daughter of Mayor Nelson Franklin and wife of Victor, Colorado, fell and broke her arm above the elbow the first of the week.

Mrs. Chase Withrow, of this city, who met with an accident at her home last week by falling down a flight of stairs, is reported as doing nicely, and is able to sit up.

Sinking has been suspended at the Fisk Mine for the present, says Manager Stockbridge, and the lift just completed makes the shaft a depth of 1,185 feet. Drifts are being extended both ways from the bottom, and good bodies of rich ore have been opened up. Mr. Stockbridge says it is highly probable that the owners will decide to sink another lift, if coming water does not interfere. Ore is also being opened up in the Bobtail workings of the big, consolidated property, and at present there are over 100 men employed, and daily shipments to the mills and sampling works total about 60 tons.

Willard Teller and wife were Georgetown visitors on Friday, the former to attend to business matters.

The Gray, Bennett Claim on the Kansas Mine, was turning out $1,500 daily in receipts of retort gold and returns from the smelter.

Bela S. Buell, who was working the Illinoi Mine, on Quartz Hill, was reported as having struck it big on that property.

John Best, of the Pharmacy, having bought the place recently vacated by Judge Ginn, was tearing down the old building to make room for a neat cottage.

Died: Robert Morris came in from Caribou Thursday morning bringing the news of the death by drowning of Dr. R. W. Sweet. Dr. Sweet and Marshal Walter Jenness of Black Hawk left Caribou Thursday morning on horseback for Boulder City. Arriving at the junction of Middle and North Boulder creeks, while crossing over a foot log, Dr. Sweet fell into the stream and was soon swept out of sight in the raging stream. Friday morning, the body was found by George Sparks, one of the searching parties, a quarter of a mile below the point where he fell into the creek. The body was brought to this city.

Died: Mr. Dexter, who came in from Middle Park the first of the week, reported the drowning of Hi Horn, in Grand Lake, on June 9th.

Died: James Hogan was killed in the California Mine on Monday. He was standing on the rim of the bucket being hoisted to the surface, when the bucket caught on a projection of the side, throwing him out, and he fell to the bottom of the shaft, a distance of 250 feet. He was 35 years of age.

END_OF_DOCUMENT_TOKEN_TO_BE_REPLACED

Where the dead get to tell their story By Jaclyn Schrock On Saturday, August 21, the Gilpin Historical Society held their annual Cemetery Crawl. Tickets allowed the shuttle of hundreds of guests from the Teller House parking lot to the Cemetery. Depending on v... END_OF_DOCUMENT_TOKEN_TO_BE_REPLACED