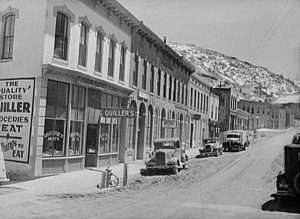 The Amtrak train made an unscheduled stop in Rollinsville on Tuesday. The L.A. to Denver passenger train idled on the track for over an hour while three unrelated incidents were resolved. Gilpin County Coroner Dick Allen was called at 7:30 p.m. to supervise the removal of the body of a male passenger, who had apparently died of natural causes. Meanwhile, Allen said Search and Rescue ambulance service volunteers were helping to organize an airlift for a woman who appeared to be having cardiac difficulties. While the train was stopped in Rollinsville, officials on board decided to eject two passengers who had reportedly been involved in a fight, rather than allow them to continue on to Denver. One of them, Allen said, was later arrested by a sheriff’s deputy and taken to jail. The train continued on to Denver around 8:45 p.m. for what one would hope to be a less eventful finish to the interrupted journey.

An old safe was uncovered recently during renovation of the Chandelier House, soon to be the Silver Slipper. The safe was housed in its own little cubicle of walls between the upper and lower level. Historic Renovations Inc., is the construction company that discovered the hidden safe. They are also doing renovations on the old Jail Exhibit, soon to be known at Annie Oakley’s. No treasures were found in the safe. There were quite a few ledgers and receipt books for the New York Store Merchandise Co. The oldest article found was a memorandum book dated March 26, 1895, which contained bookkeeping entries. The newest article was a record of visitors. There was no indication of where in Central City the signees were visiting, by the last entry was dated 1966, so the safe must have been walled up soon after that date.

Born: Kristofer Wilhelm Artz has joined his sister Kelly Marie at their home on the Casey in Central City. He was born at 12:33 p.m. at Rose Medical Center in Denver, Monday, June 3rd, weighing in at 8 lbs. 4 oz., and is 20 inches long. Proud parents are Lisa and Konstant Artz. His grandparents are Kay and Bill Lorenz of Black Hawk and Mary Artz of Connecticut. Also welcoming Kristofer were great-grandmother Anna Lorenz of Central City, and Florence Dyer of mid-Gilpin County.

For the second time in two years, the large plate glass window in Springer’s Drug Store was ruined by vandals. The first of such depredation was caused by a rock being thrown through the pane, and this time by a heavy beer glass hurled through the window, leaving a hole and cracking the glass in several places. The City officers have figured the damage occurred about 4:00 o’clock a.m. Sunday morning, as about that time, Marshal Sydney Gent arrested two young men who were imbued with plenty of “mountain dew,” and placed them in the County jail. The following day they were taken before Police Magistrate Lee Lyttle, who fined them $15.00 and costs for disorderly conduct. In questioning the young men, who are brothers, and who gave their names as Gary and Roger Clark of Westminster, they inadvertently admitted they might have been responsible for the damage to the window, and such information was given to the insurance company. We do not know what action will be taken by the insurance company, but we hope that a conviction can be obtained, as George’s descriptive adjectives and language is as virulent as a mule-skinner of the early days. There are always numerous cases of rowdyism in Central City, particularly during the Opera Season, and it is hoped that an arrest can be made, and the culprit brought to trial and receive a lengthy sentence in one of our penal institutions. Marshal Gent also arrested a man giving his name as Bill E. Smith, of Livingstone, Nebraska, for speeding on a one-way street who was fined $15.00 and costs for his joy ride.

Mrs. Clyde Prout, niece Annie Fuelscher, a former resident of Central City, and Mr. and Mrs. Evans of Glendale, California, called on friends in Central City on Sunday. Gerald Prout graduated from Colorado University, and he will be associated with Mr. Evans as pharmacist in his Glendale drug store.

Mr. and Mrs. H.H. Lake returned to Central on Thursday of last week, after spending the winter season in California.

“Fatty” Mills and Glen Sherman were over from Nederland last week and placed three markers on the graves of old citizens in the City and Knights of Pythias cemeteries.

Mr. and Mrs. Amos B. Clark, and son Amos, Jr., accompanied by his mother, and Mrs. G.M. Laird, came up from Denver Saturday afternoon. Mr. Clark and mother returned to Denver that afternoon, but the rest of the family will remain for the week.

Mrs. W. Green and children were over from Idaho Springs during the week, on a visit to the head of the household, and to investigate as to his abilities as a “chef” and housekeeper.

We had a pleasant call last Friday by Mr. Donald B. McRae, of Pasadena, California, whose mother, Kate Hatch McRae, is so well known to all Gilpin County people. He motored to Colorado on an outing trip, and is enjoying his vacation visiting his old home and with friends of former days.

Miss Laura Magor of this city has accepted a position with the Denver Dry Goods Company.

Henry Bolthoff, of the firm of Henric & Bolthoff, of Denver, was in Central during the week, looking after business for his company.

Father Desulniers, pastor of the Catholic Church in this city, who had spent several days of the week in Denver, returned to Central on Thursday evening’s train.

Miss Eugenia McFarlane came up from Denver Thursday, on a short visit with relatives and friends.

Mr. E.T. Taylor, a recent arrival from St. Joseph, Mo, was taken down with smallpox on Tuesday, and was taken to a cabin at Lake View, where he is receiving the best of care and attention.

John Foster, a resident of Smith Hill, was a visitor to Black Hawk last week.

Died: Dr. S.D. Bowker, who in the early ‘70s was a resident of this city, died in Kansas City, Mo., on Saturday last, aged 71 years. While practicing medicine in this city he also filled the pulpit in the Baptist Church. He and his family have been residents of Kansas City since the early ‘80s.

Died: Nick Dusovich, who left here for Leadville last winter, was killed in a mine accident in that camp, last week. He was 23 years of age, and formerly worked in the Cook Mine.

The miners operating the Suderburg Mine have drifted into the Prize Mine in the Nevadaville District, establishing the claim by Mr. Nat Young that the two mines are on the same lode, and that by priority of discovery and preemption the Suderburg was entitled to the ground held by the Prize Lode. The matter will be settled in the courts.

The little daughter of James Hutchinson fell into a tank at the Briggs Mine and it was some fifteen minutes before she was rescued. Floating debris buoyed up the girl and Dr. Garrott and Dr. Reed were successful in restoring respiration.

The Langrishe Troupe, with Miss Annette Ince as the star, made its appearance at the Montana Theatre and presented such well-known plays as “The Hunchback,” “Camille,” and other plays to large audiences.

Mr. Conant, father of Fred Conant of Black Hawk, had arrived from the east on a visit with his son and family.

Rev. J.H. Vincent, of New York, brother of Rev. B.T. Vincent, of Colorado, assisted by Rev. D.L. Moody of Chicago, preached to a large congregation at the M.E. Church on Wednesday evening.

William Fullerton, A.N. Rogers, Bela S. Buell, William Lee and Sam B. Morgan, as members of the Bobtail Tunnel Company, called for a meeting on the stockholders, in Black Hawk on June 24.

William Updike and John Hatch, of Central, were visiting Idaho Springs on Tuesday.

Two gold notes, a ten and twenty dollars, issued by the First National Gold Bank of San Francisco, were being shown at the Thatcher, Standley & Company’s Bank in this city, and attracted considerable attention.

END_OF_DOCUMENT_TOKEN_TO_BE_REPLACED

Benefitting the county, schools, and much more By Don Ireland   This year marks the 30th anniversary of casinos opening in the former little mining towns of Black Hawk, Central City and Cripple Creek, Colorado. In those early years, smoking was allowed inside ... END_OF_DOCUMENT_TOKEN_TO_BE_REPLACED

Benefitting the county, schools, and much more By Don Ireland   This year marks the 30th anniversary of casinos opening in the former little mining towns of Black Hawk, Central City and Cripple Creek, Colorado. In those early years, smoking was allowed inside ... END_OF_DOCUMENT_TOKEN_TO_BE_REPLACED