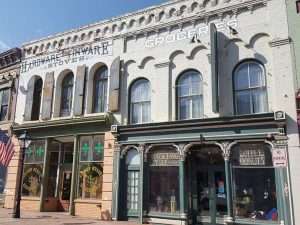 An eleven year old boy with Down’s syndrome was lost for about two hours Sunday afternoon when he wandered away from the family home on Gap Road. The boy, who was visiting his family from Denver, was last seen playing with two dogs at about 3:00 p.m. The Sheriff’s Department, Search and Rescue, and the Forest Service looked for the youngster until he and the dogs turned up about 5:00 p.m. at the house at Sutton and Gap Roads. The boy went up and knocked on the door, telling the person who answered that he was lost. Sunday was only the second time Search and Rescue has been called for a search this year. Though Commander John Rittenhouse hopes that organized searches continue to be few and far between this summer, the volunteer organization can always use more members who can help search through rugged terrain. Call Rittenhouse for information about joining Gilpin County Search and Rescue.

James Disner is a new deputy marshal in Central City…sort of. Disner was hired as a permanent deputy on May 13, but he worked as a part-time contract officer last summer and since then has been filling in when Marshal Elmo Gatlin or Deputy Keith Coombe has been on vacation. Disner graduated from the Arapahoe County College Sheriff’s Academy shortly before he joined the Central City force last summer. “It’s kind of neat,” he says, “working in a small town where everyone knows you—even if I don’t know everyone here yet.” Though he presently lives in Arvada, Disner has been looking for a place to live closer to town—say within five miles.

Died: Teresa “Tess” Terpening. Central City resident Teresa M. Terpening (Tess) passed away at 9:24 p.m. on May 26 at Swedish Medical Center in Englewood at the age of 68. She died of complications from diabetes and arthritis. Born October 29, 1922 in Wichita, Kansas, to Charles and Geneva Murphy, Tess grew up in Wichita and lived there until she met Vern Terpening in 1947. Leaving Wichita, the couple eloped to Raton, NM, where they were wed on April 29, 1949. In 1950, Vern and Tess moved to Central City and opened Terp’s Leather Good shop on Main Street. For 41 years they ran the shop together. Tess was a member of the Order of Eastern Star. She loved southwestern art and collected her favorite, Kachina dolls. Tess is survived by her husband Vern Terpening of Central City; her daughters Shirlene Howard, of Boulder, Pricilla J. Barker of Pueblo, and Donna Westfall of Wichita, Kansas; her son, Gerald Love of Molvane, Kansas, and many grandchildren and great-grandchildren. There will be no services at her request.

At a hearing last Friday at the City Hall, before Police Magistrate Lee Lyttle, wherein the City of Central instituted suit against several business houses for neglect in paying their occupational tax, which is a violation under their Ordinance, the Police Magistrate ruled in favor of the City of Central. It is quite obvious the decision will be appealed to the County or District Courts, and we wonder why the two factions cannot get together and settle this question in a reasonable and fair manner. Does it mean that Ordinances are only made to be broken? Does it mean that Ordinances relating to Ordinances relating to signs extending over the sidewalks must be curtailed, and nothing done about it? Does it mean that raucous so-called music, which is also a violation of an Ordinance, cannot be eliminated? We do not know why the discrimination, but we feel sure that cooperation between all parties concerned will result in a better city, devoid of all petty jealousies, with harmony and understanding existing.

Noticed in the Denver News of Sunday, an article making mention of Bart Dalsant, who celebrated his 40th anniversary as an employee of that paper. He started as a linotype operator in 1921, after leaving Central City, where he had served his apprenticeship as an operator at the Gilpin Observer and the Register Call. He was the linotype operator in the Register Call during the time Ye Editor was in the services of Uncle Sam in the worst war he was ever in, but Bart and Dad managed to issue a paper each week without my help. Congratulations, Bart, for your long service with the Rocky Mountain News.

We’re decidedly tired of this kind of weather, as there has only been three days of sunshine in the last ten weeks. During the years I have lived here, which is the life span of every human, this Spring and a few days of Summer, have been filled with snow, hail and cold weather that has baffled even the oldest inhabitant. Thunder storms have been a daily occurrence, and during the electric storm Tuesday afternoon, a bolt of lightning hit the glass roof on the Teller House, with a resounding crash, shaking the building to its foundations and completely demoralizing the telephone lines in the building. It was impossible for the telephone crew to immediately repair the damage, as they had been called to Georgetown to repair damages there due to the storm. June is supposed to be the most beautiful month in the year, but weather conditions discount that fact. We fervently hope that weather conditions will improve, and that 1961 will not be a year without a summer.

Mr. Albert B. Sanford, assistant curator of the State historical society of Colorado, was up from Denver Tuesday on business matters and made this office a pleasant call, and to get records of early days.

Mrs. G.L. Neumann, of this city, had as a guest last week, Grace Stone Coates, author of “Black Cherries,” a book which has created a literary stir this spring. The lady was a guest speaker at a meeting of the Monday Forum Luncheon Club, in Denver. After her short and pleasant visit here, she left for her home in Martinsdale, Montana.

Mr. George Kirtz and family came up from Denver Saturday on a visit at the old home, and with friends of early days.

Messrs. Jake Leidinger and Thomas Mitchell left for Denver Friday afternoon, to attend the dance given by the pioneer firemen that evening at the Auditorium.

Mrs. Rae Laird and Mrs. Alice Cavanagh drove up from Denver Saturday afternoon, on a visit to the cemetery, to plant flowers on the graves of loved ones, returning home that evening.

Professor Price, who taught school in Russell Gulch in the early part of this century, was a caller at this office Wednesday morning.

Died: Mrs. Joseph Kimball, of this city, received a telegram Tuesday morning, announcing the death of her brother, Alfred Uren, in the government hospital at Helena, Montana. The young man was in the World War, where he, like many others, was gassed, and his health destroyed. He was 42 years of age, single, and besides Mrs. Kimball is survived by another sister, Mrs. Mollie Hancock, of Wooley, Washington. The body will be shipped to this city, and interment will take place in the family lot in the cemetery at Idaho Springs.

A farewell party was given Saturday evening at the residence of Mr. and Mrs. John R. Hoskin, in this city, by a number of friends on the eve of their departure for England on a four months visit to the scenes of the early days in Cornwall, England. Those present were Mr. and Mrs. Will Hoskin, Mesdames John G. Williams, Jeffrey and Walden, the Misses Laura Edwards, Mattie Hooper, and Florence James, and Messrs. Nick Johns, Charles Johnson, Charles Cronin, Jim Johns, Herman Lundberg and Lee Ekstrom.

Mrs. W.C. Fullerton and two children returned from Denver on Tuesday evening’s train and will remain here for the balance of the summer.

Attorney R.S. Morrison, of Denver, attended the opening of the district court in this city, the first of the week.

George St. John and wife left for Golden Saturday to attend the funeral of Frank Reese, her stepfather. The deceased was formerly a well-known resident of this county.

Mr. F. W. Ballard has been engaged in making a drawing for the improvements that are contemplated at the Stroehle Boiler Works in Black Hawk.

During the month of May there were shipped from Black Hawk depot to the smelters and other places of treatment, 319 carloads of ore and concentrates, aggregating 5,902 tons. In comparison with the same month of last year, these shipments show a gain of 68 carloads, or 1,250 tons, an increase of over 20 percent, which tells plainly the tale of Gilpin County’s activity.

Lamont & Ballard have taken a contract for the erection of a shaft building, 20×45 feet, on the Gauntlett Mine on Quartz Hill, and will also install the hoisting plant formerly in use on the Star of the West group, on the property.

During the month of May the shipments from the properties operated by the Kansas-Burroughs Mining Company amounted to 446 tram cars, of 3,790 tons.

Central City scrip was worth 90 cents on the dollar and school scrip was quoted at par.

Mr. Harley B. Morse and daughter were visitors to Georgetown on Saturday.

Mr. W.L. Leo, late manager of the Black Hawk Company’s affairs, has returned from the East.

END_OF_DOCUMENT_TOKEN_TO_BE_REPLACED

Where the dead get to tell their story By Jaclyn Schrock On Saturday, August 21, the Gilpin Historical Society held their annual Cemetery Crawl. Tickets allowed the shuttle of hundreds of guests from the Teller House parking lot to the Cemetery. Depending on v... END_OF_DOCUMENT_TOKEN_TO_BE_REPLACED

Benefitting the county, schools, and much more By Don Ireland   This year marks the 30th anniversary of casinos opening in the former little mining towns of Black Hawk, Central City and Cripple Creek, Colorado. In those early years, smoking was allowed inside ... END_OF_DOCUMENT_TOKEN_TO_BE_REPLACED