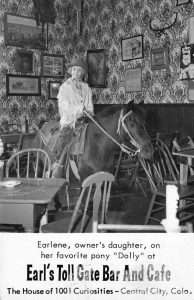 On Wednesday, April 10, Central City council adopted a resolution increasing water tap fees. New water taps for residential and commercial properties will begin at $7,420 for a ¾” tap, the smallest size available. The water tap fee, said ALC planner Dave Stahl, includes the actual cost of the taps, plus an estimate of raw water and treatment costs for the water provided through the tap. “These factors,” Stahl said, “would suggest $7,420 per [¾”] tap.” The tap fee increase is a drastic change, but ALC felt obligated, Stahl said, to point out the costs of providing water. Tap fees in communities such as Thornton and Northglenn typically begin at $4,800-$6,000, he added. All existing water taps will be worth the new fee amount, rather than what they cost when installed. That means, said Stahl, that a property owner who wants a larger tap would pay the difference between the value set in the resolution for his present tap, and the total cost of a larger one.

In and About G.C.H.S., by Dave Cultey: The students are going to be busy this last month, mainly because they want to leave having good grades. I imagine this will also be a happy time for the teachers because now they will have three months’ vacation—and summer school. The juniors are now decorating the gym, but the reason for such doings I’m not quite sure of, but we all have our suspicions. No doubt there will be a surprise in it somewhere. A group of officials were present during class hours on Tuesday to have a look at how small schools are run. They were from Virginia. The students enjoyed their little get-together on Saturday at the Holland House in Golden. They took in a show afterwards which really topped off the evening. It was a lot of fun and it gave the students something to do on a weekend for a change. The seniors will get out of school a week or so before school is actually out for all the students. This will give them a chance to get jobs early in order to earn enough to go to college—that is for those who are going. The junior-senior prom will be held on May 13th, with a dinner in Golden and the dance in the G.C.H.S. gym—maybe that’s the reason they’re fixing up the gym—I wonder.

Mrs. C.F. Murphy received word Sunday that her father, Mr. Schoonover, was killed in an auto accident the day before at Yuba City, California. The Murphy family left early Monday morning for California to attend the funeral. Our sincere sympathies are extended.

Married: A very pretty wedding was solemnized last Saturday at St. Dominick’s Church in Denver, when Jean Ann Collins and Larry Warringer were united in marriage. The bride was accompanied by two classmates from her graduation class as RNs from St. Anthony’s Hospital, and the groomsman was Jimmie Collins, a brother of the bride. Both bride and groom are graduates of Gilpin County High School and their romance started and continued during those high school days. The bride is a daughter of Gilpin County Sheriff Tom Collins, and the groom the son and Mr. and Mrs. R. Warringer of Idaho Springs. Two years ago, Miss Collins was selected as the most beautiful girl in Gilpin County, an accordance which was well deserved. She is a graduate nurse from St. Anthony’s Hospital in Denver, and it is her intention to continue on in her profession. The couple will make their home in Lakewood, where Larry is employed at the Federal Center. Our congratulations and best wishes are extended with hopes for a calm, placid voyage over the matrimonial seas.

Mr. and Mrs. Thomas Atkinson and children motored up from Denver on Sunday, and were the guests of Mayor Robert Wilkinson and wife.

Miss Mildred Marble left on the bus Monday morning for Denver. After a brief visit with friends there she continued her trip to Chico, California, where she expects to remain for some time. The L.A. Marble family resided at Chico before returning to Colorado, and Miss Mildred attended high school there.

Mr. A.J. Duff, of the Denver Rock Drill Company, was up from Denver Thursday of last week, on business matters.

Water Commissioner Robert C. Johnson and his assistant, Mr. Thiede, are at work on the top of the flume where it emerges from under the Teller House, overhauling the same and placing new timbers where the old ones have been doing good service for so many years.

Mrs. A. Mackay left Monday afternoon on a visit with relatives and friends in Scotland, and a number of folks were at the depot to wish her a pleasant trip and a safe return.

Sheriff Thomas Cody left Friday morning for Pueblo, with Jack Rafferty of Black Hawk, who had been adjudged insane, and who was placed in the insane asylum.

The Shakespeare Club met on Monday evening at the residence of Mr. and Mrs. Francis B. McLeod, when the third act of Anthony and Cleopatra was read and enjoyed by all present.

Miss Emily Richards, of Russell Gulch, was visiting with her sister, Mrs. James Rule and family, in this city on Tuesday.

Mrs. Pethwick and daughter, Mrs. John Hooper, came up from Denver Tuesday, to attend the funeral of Mrs. Thomas Warren, of Nevadaville, held that afternoon.

Mr. A. Rapin, of the Mineral Palace, has purchased the residence owned by ex-sheriff John H. Nicholls, on Spring Street.

Gilpin County now has no indebtedness, as the county commissioners at their last meeting took up the outstanding bond on the new courthouse, to the amount of $3,500, and the county now has about $10,000 in the separate funds deposited in the banks.

At the West Notaway Mine the four lower west levels are being worked with double shifts, the working force numbering 15 men, under the superintendency of Mr. H.F. Pool. In the bottom level recently opened up by the company, after unwatering the property, a good body of smelting ore, measuring two feet wide, has been opened up, the mineral showing yellow and gray copper, a character of ore in this mine that always carried high values in gold. The milling and concentrating ores have been treated at the mills in Idaho Springs with success, and a shipment of 75 tons is now being loaded on the cars in Black Hawk, for that point. The property is being operated by the Notaway Mining Company, who have been keeping up development work for a considerable time, and are opening up the property in good shape.

The members of the Congregational Church granted a leave of absence of two months to the pastor, Rev. Mr. Dickinson.

Root & Queen cleaned up 9 ounces gold from a day and a half sluicing in Russell Gulch.

Messrs. B.C. Waterman, Thomas Mullen, and Clinton Tyler left on Thursday to attend the railroad convention to be held in Golden.

END_OF_DOCUMENT_TOKEN_TO_BE_REPLACED

Benefitting the county, schools, and much more By Don Ireland   This year marks the 30th anniversary of casinos opening in the former little mining towns of Black Hawk, Central City and Cripple Creek, Colorado. In those early years, smoking was allowed inside ... END_OF_DOCUMENT_TOKEN_TO_BE_REPLACED