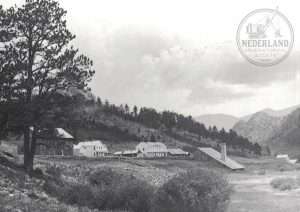 “I am very pleased,” commented Richard Goozh, general manager of the Teller House on Tuesday, concerning the 30-year lease of the historic building. Formally announced on April 9, the Central City Opera House Association (CCOHA) Board of Directors voted to approve the lease agreement. Goozh will be retained in his present job, but the terms of his responsibilities are still being finalized. “These new investors will revitalize the Teller House,” he said, “and bring new life into our community.” The investors plan to restore the exterior as well as the interior of the historic hotel which was constructed in 1872. These aren’t the only renovations being made. The Assay Office, west of the Teller House, will be extended to the back of the property. This expansion is expected to replace the present patio eating area, which will be relocated to the second floor. The new patio will be constructed next to the Eureka Room by extending the present smaller patio the full length of the building above the Assay Office. The Little Kingdom Room will continue to be used for dining, Goozh said, for the summer and may possibly change in the winter. The new lease holders are Sam Perry, a native Coloradoan, and one of the original founders of Perry & Butler Real Estate. He is presently engaged in real estate development. Robert Leisen, a resident of Denver, has an extensive background in real estate development and limited wager gambling operations. Perry and Leisen are joined by Robert Leisen, Jr., and Doug Oien. Architectural plans for the Teller House have been presented to the Central City building department and the Historic Preservation Committee, Goozh said. Renovation work is not going to be an easy task, nor one that can be done in a short period of time. Work on the exterior and interior of the building will be done over a three-year period. The famous “Face Bar” will continue to operate, and a casino area is being planned. All expenses of the operation will be paid for by the Perry Group, according to the CCOHA. Rental of the building is $3,000 per month, plus rent based on revenues from the operation. Opera House patrons will have priority use of the Teller House dining facilities during opera season. “The 1872 building has undergone several restorations in its 120-year history,” said Nancy Parker, president of the CCOHA. “This renovation will ultimately return the Teller House to its place as one of the fine old historic hotels of Colorado, to be appreciated and enjoyed by both tourists and opera patrons alike.”

Central City Alderman Stuart Boulter has confirmed that he has accepted an offer for the Golden Rose Inn. The offer was said to be $5 million, though that has not been confirmed. Though nothing is final until the contract closes, and he has the cash on hand, Boulter is looking forward to having more time to devote to city government and pet projects such as Easter Seals. “Everything happens for a reason,” Boulter said, adding that if he sells the Golden Rose, he can avoid the “conflict of interest issue.” Some people have maintained that elected city officials in Black Hawk, Central City, and Cripple Creek should not be allowed to participate in gaming enterprises. Boulter said that whether or not he sells the hotel, he will continue to live in Central City. As a matter of fact, his exact words were, “You’re stuck with me.”

Mrs. Hazel Davis entertained at a bridal shower for Miss Jean Collins, Tuesday afternoon at the Golden Key. Miss Collins will be married to Mr. Larry Warriner on Saturday, in Denver.

Rev. John R. Kuenneth, curator of St. Paul’s Episcopal Church of Central City, has been transferred to St. Mary’s Church in Denver. He will work in the parochial schools and with the Canterbury Club at Denver University. Father Kuenneth has been the Priest of Georgetown, Idaho Springs and Central City parishes for the past of four years and has made many friends who extend congratulations and good wishes to him in his new assignment.

Mr. and Mrs. Roy Addyman drove to Denver on his “day off” Monday. They stopped in Lakewood to see their daughter, Mrs. Wirth, and were surprised and happy to find another daughter, Mrs. Troy Doty and her family from Weeping Water, Nebraska, who had come on a surprise visit. The Wirths and Dotys joined the Addymans here for dinner Tuesday evening.

Mrs. Ernest Wright was hostess to the pinochle club on Wednesday.

Mr. Jesse Githens of Golden was here Saturday checking at his motel and greeting friends. He plans to open the motel for the season, in the near future.

Ruby Theide returned to her home at Central City, Sunday, after spending her Easter vacation with her aunt, Mrs. A.M. Hackett.

William F. Godeln, the German Consul of Denver, accompanied by William Bockhacker, his secretary, came up from Denver Saturday on matters of business in connection with the family of Albert Willinsky, who formerly resided in Black Hawk. They visited in Black Hawk, where they obtained all the information desired, concerning the gentleman mentioned, and left during the afternoon for Denver.

Mr. and Mrs. B.E. Seymour, accompanied by Mrs. Melita Seymour, came up from Denver Sunday morning to attend services at the Episcopal Church, returning home during the afternoon.

John Gundy and wife of Golden, and George Williams and wife, and Eva O’Toole and sister, of Denver, motored up from the valley on Sunday and were the guests of Mr. and Mrs. Oscar Williams.

James Bartel of Nevadaville, while mining in the 900-foot level of the Hidden Treasure Mine the first of the week, was struck on the head by a falling rock, inflicting a severe scalp wound.

Mrs. Will McLeod, after a visit for a couple of weeks with relatives in this city and Black Hawk, left for her home in Goldfield, Colorado, Monday morning.

Miss Emma Harris came up from Denver Monday morning, to attend to business matters and to visit with friends.

George Cowling of Bates Hill, has gone to Iron Mountain, Michigan, where he has secured work, and intends soon to send for his family.

Manager Patrick McCann, of the Kansas-Burroughs and Patch Mining Companies, paid off about 160 men on Monday in the distribution of monthly wages. He reports that the water in the California Mine is now below the 2,000-foot level and is being lowered rapidly, and unless something interferes, the bottom of the shaft, 2,230 feet, will be reached by the middle of next month.

Sinking will be completed this week at the National Mine, on the second lift of 100 feet, which will make the shaft 550 feet deep. Superintended Sherman Harris says the shaft looks fine and some good assays have been obtained on ore from the shaft. As soon as the present contract is finished, the lower levels will be driven both ways from the shaft and the general work of opening up the ore bodies will be vigorously carried on.

McFarlane & Company of Black Hawk, have the stamps ready for the new mill which they will build in Nevada Gulch for the Avon Mining Company, and as soon as the weather is settled, work will commence on erecting and equipping the same.

Died: Robert S. Old, a prominent citizen and largely interested in the mines in the vicinity of Georgetown, died Wednesday on the steamship Oceanic, in New York harbor, while on his return voyage from Europe.

John Boylan had rented the Woodbury & Norton stamp mill in Black Hawk and was putting it in shape to treat custom ores.

The Wednesday issue of the Register was printed on paper manufactured in the new paper mill at Golden, the first mill to be established in the Rocky Mountain region.

A specimen of ore was on exhibition at Standley & Company’s bank in this city, which came from the bottom of the shaft on the Caribou Mine. It weighed only 14 pounds and was estimated to be worth $100, as the ore assayed 12,000 ounces silver to the ton.

Mr. C.C. Welch was up from Golden during the week, on railroad business.

END_OF_DOCUMENT_TOKEN_TO_BE_REPLACED

Benefitting the county, schools, and much more By Don Ireland   This year marks the 30th anniversary of casinos opening in the former little mining towns of Black Hawk, Central City and Cripple Creek, Colorado. In those early years, smoking was allowed inside ... END_OF_DOCUMENT_TOKEN_TO_BE_REPLACED