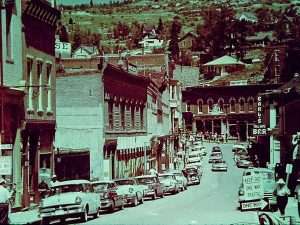 The Inactive Mine Reclamation Program (IMP) has safely secured over 300 mine shafts in and around Black Hawk and Central City so far. Project manager Jim Herron informed the Board of County Commissioners on Monday that 102 additional shafts are scheduled for capping this summer. The area of concentration this summer, said Herron, will be in the Lake Gulch District, where approximately 80 shafts will be covered. The remaining caps will be installed toward the Russell Gulch District, he said. This is an important program, said Dave Bucknam, program supervisor, especially now when the county is expecting a tremendous influx of visitors. The program is funded by the U.S. Department of the Interior through the Colorado Mined Land Reclamation Division. The program is designed to protect local residents and visitors alike from the dangers common to once-active mining areas such as Gilpin County. Not only are open shafts covered, but also open portals and adits. Surface subsidence and mine drainage are also addressed. Last year Herron supervised a mine drainage cleanup in the Gamble Gulch area. He is happy to announce that test samples of water taken from the wetland installed during the project show the mine drainage now below toxic levels for trout. Mine capping is a voluntary program between property owners and the IMPS. Removable caps or those that allow access to mines are available, helping protect owners from liability while still giving them access to the mines.

We noticed a picture in the Denver paper Saturday last portraying the photographs of various Sheriffs and Law Enforcement officers who were attending the annual meeting of the Sheriff’s organization in Denver, and noticed the smiling features of Sheriff Tom Collins of Gilpin County. On careful analytical study of each Sheriff being pictured, it became obvious that no sheriff was better looking than our own Sheriff from Gilpin County.

Mr. and Mrs. Ken Culvert, who have a home at the foot of Bear Mountain, have purchased the lease from Charles Goodpasture, who in turn had a lease from George McLaughlin in Mac’s Pool Room and Liquor Store, and took possession on Tuesday of this week. It is the intention of the new owners to remain open from 8:00 o’clock in the morning until 12:00 o’clock each night. We extend the best of luck to them in their new venture. The name has been changed from “Mac’s Liquor Store and Billiard Parlors” to “Ken’s Liquors,” so when you are desirous of a game of pool, several games of cards, or a “short” bottle, stop at their place of business and you will be greeted with all courtesy.

A surprise Stork Shower was given Tuesday afternoon at Ramstetter’s Café for Carol Gent, wife of City Marshal Sid Gent, formerly of Buffalo, N.Y. The shower was given by Mrs. Sarace Shivers, Mrs. Hank Roberts, Mrs. Marion Prentice, and Mrs. Darlene Lemmen. The gracious guest of honor received many lovely gifts. Refreshments were coffee, Angel cake with a stork on top and baby mints in paper diapers made out of napkins. The hostesses thank everyone for making it a success.

Weather conditions so far this month have been perfectly satisfactory to the mountain residents, and a continuation of the same for the balance of spring will be fully appreciated.

Billy Driscoll was up from Denver to spend his school vacation with his mother and playmates.

Mr. and Mrs. A.B. Clark and son, Amos, Jr., came up from Denver Saturday afternoon, on a visit with her parents, Mr. and Mrs. G. M. Laird. Mr. Clark returned Sunday afternoon, but the rest of the family will remain another week.

Mrs. Harvey and Mrs. Bushnell, of Georgetown, attended the Easter services at the M.E. Church in this city on Sunday last.

Mr. and Mrs. Harry J. Sears left Thursday morning for the East, where Mr. Sears will attend to business matters.

Mrs. Richard Murley and Mrs. Emma Marlow of this city took part in the concert programme at the M.E. Church in Black Hawk Monday evening.

Henry Becker of Chase Gulch left for the East on Sunday on business matters.

Owing to ill health, George Sparks, of Nevadaville, has resigned his office of Justice of the Peace and has left for Texas, in the hope that a change of climate would prove beneficial to his health.

Captain E.M. Stedman and Lieutenant Ripley of American City were visitors to Central City during the week.

Anton Cessario, of Nevadaville, who had his leg broken two weeks ago, was take to Denver on Friday and placed in the Elk’s ward in the St. Joseph Hospital, where he will receive proper care and attention.

The new cable for the California Mine was received last week and has been installed on the drum of the engine and both water buckets are now in active use draining the mine, and it will not be long before the 20th level of the mine will be reached. The new rope is 1 ½ inches thick and 3,000 feet in length.

The Montana Theatre opened on Wednesday for four nights with Mr. McKee Rankin and Miss Kitty Blanchard, as the leading members of the Langrishe Troupe.

John Best was a business visitor to Denver during the week returning Sunday.

A preamble and resolution of respect was published because of the fact that Rev. Francis Byrne of Nevadaville, had been appointed by Rt. Rev. Bishop Randall to take charge of Jarvis Hall College at Golden City.

Mr. J.D. Lake and family left on Tuesday on a visit with relatives in Pennsylvania.

Mr. A.W. Bernard, the proprietor of the Georgetown Miner, returned from the east on Monday’s coach.

Mr. Schultz had arrived from New York to take charge of the old Bullion Company, whose mill was located at Downieville.

END_OF_DOCUMENT_TOKEN_TO_BE_REPLACED

Benefitting the county, schools, and much more By Don Ireland   This year marks the 30th anniversary of casinos opening in the former little mining towns of Black Hawk, Central City and Cripple Creek, Colorado. In those early years, smoking was allowed inside ... END_OF_DOCUMENT_TOKEN_TO_BE_REPLACED