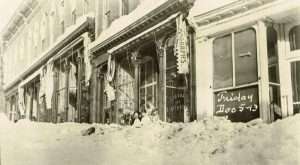 We asked some Central City merchants what the advent of gambling will do their business plans. With so many for sale signs and new ones appearing almost daily, changes are sure to come.

Victorian Nugget: Lary Brown has run his gift shop for several years now, and he knows his time is limited. “I need to find a friendly banker,” he said with a smile. “My lease expires on October 31, and I haven’t asked for an extension.” It’s his understanding that landlord Stu Boulter won’t consider renewing the lease at the current price. As a matter of fact, he said, he’s heard the shop will become a poker parlor, although he hasn’t verified the rumor. When Oct. 31 rolls around, Brown plans to move his merchandise, display cases and chandeliers to the Knights of Pythias Building on Gregory St., which he purchased last year. The building needs a considerable amount of repair work—that’s why Brown wants to find a friendly banker. If he does, his plans are to put in gambling, a gift shop, and perhaps a bar.

Rock & Lite Shop: Longtime resident Rosemary Hennings is staying. Although her antique store has been in the same location for 19 years, she just bought the building last summer. With a newly redecorated interior, she’s looking forward to an economic revival in town.

The Bonanza: Plans for now, according to Reed Grimes, are to condense his present gift shop, and gold gabling and a bar on the ground floor. He also plans to reopen the once popular Golden Key bar, which occupied the second floor until about 10 years ago. He’s not sure yet what other business will be on the second floor, but a third of the space will be devoted to gambling.

Mrs. Earl Quiller and Miss Marjorie Quiller were in Denver on Monday visiting their eye doctor.

Mr. and Mrs. Verne Sorenson and son, Rocky, are spending their spring vacation in Glenwood Springs.

Mrs. Charles Anderson, his father and son, Randy, are in Truth or Consequences, New Mexico.

Mrs. Lerche Sorenson is in Denver getting acquainted with a new grandchild.

Mr. and Mrs. Louis Cohen, who are operating the Golden Key Café on Main Street, are moving to the Catholic Rectory on Spruce Street. The Golden Key will be open, serving delectable lunches and dinners, but they desired to get away from the noise of Main Street during the summer months.

Mrs. John Anderle drove to Denver Saturday to spend a few days with friends in that city.

Mr. Louis Plank has been on vacation from his job but hasn’t been enjoying it. He has been going through some painful sessions in the dentist’s chair.

Congratulations to Mr. and Mrs. Wallace Nelson upon the arrival last Thursday of their little daughter, Laurie Jeanne!

Funeral services were conducted Thursday for Mr. Ernest Boling, a one-time resident of this city. Interment was at Ft. Logan National Cemetery. He is survived by a son, Howard, two daughters, Louis Monroe and Taletha Mosley; also eight grandchildren.

Walter Flagler came up from Arvada Monday, and in company with T. Vivian and W.J. Williams, they started work on the Galatea Mine in Russell Gulch.

Mrs. Johnson and children are up from Denver on a visit with the Zancanella family.

Mrs. Inez Schmidt came up from Denver on Friday last, on a visit with her parents, Mr. and Mrs. J.D. Richards, of this city, and to help them pack up their household goods for shipment to Denver, Friday, where they will make their future home.

We had a pleasant call on Sunday last from Mr. and Mrs. Edward Eisenbaud and Mr. and Mrs. Dr. Nolle Mumey, of Denver, who spent several hours looking over old files of the Register-Call. The former gentleman is one of the photographers on the Denver Post, and the latter gentleman is gathering history of the early days in Colorado.

Roy Thomas, the barber, who has been suffering from sinus troubles for a couple of weeks, was able to return to his duties again on Wednesday, but still suffering from the disease.

Frank Howard, of Idaho Springs, who died suddenly last week while cutting down some timber on Fall River, was the father of Lawrence Lee Howard, of this city, an employee of the Chain-O-Mines Company.

Funeral services of the late William Scholl were held at the Elks Lodge room in this city, on Sunday afternoon, where the regular burial services of the order were carried out, accompanied by a few remarks by Mr. B.E. Seymour, an old friend and associate of Mr. Scholl. Monday morning the remains were taken to Fairmount Cemetery, Denver, where burial services were conducted by the Order that afternoon. The pall bearers who accompanied the remains to Denver were Jacob Leidinger, James Daly, James Cody, Earl Quiller, Louis J. Carter, and Henry J. Stahl.

Richard Paynter, a half-brother of Ed. L. Harris of this city, was shaking hands with his many friends in this city during the week. Mr. Paynter left Central some 23 years ago and located to an island close to New Zealand, where he is engaged in sheep raising. He is in the south temperate zone, the weather being about the same as here, except there is no snow. It took him five weeks to make the trip to San Francisco by steamer. He gets his mail and supplies once in two months, when the steamer calls at the island. His account of that section of the universe is interesting and entertaining, and is worth hearing.

James Noonan had taken a position with the People’s Mercantile Company, with Mr. S.P. Halfly having resigned to move to Kingman, Kansas.

Manager Patrick McCann, who is operating the California Mine on Quartz Hill, for the Patch Mining Company, has recently placed an order for 3,000 feet of steel wire rope, ½ inch in thickness, which will replace the one which broke last week while hoisting a bucket of ore. In the meantime, hoisting is being carried on with one bucket, and the water at present writing is below the 1,900-foot level. As soon as the new rope is received, hoisting water will again commence, and it is expected that the bottom of the shaft will be reached by the first of May.

Manager Steve Hoskin, of the Freedom Mine, received returns during the week from a shipment of a carload of smelting ore that returned $115 per ton. Regular shipments of mill ore are being maintained to the mills in Black Hawk, which are giving fair returns with tailings worth from $19 to $22 per ton.

At the Carr Mine on Bobtail Hill, sinking has been suspended for a few days while drifts are being extended at 600 feet from the surface, and as soon as they are in a safe distance, sinking will again be resumed. Work is being carried on with three shifts, and all indications are that the mine will prove a good shipper during the balance of the year.

Mr. W.B. Rockwell had returned from a successful business trip to the east.

On Tuesday, March 28th, work was commenced on the Denver & Boulder Valley Railroad at the eastern side of Boulder City.

END_OF_DOCUMENT_TOKEN_TO_BE_REPLACED

Where the dead get to tell their story By Jaclyn Schrock On Saturday, August 21, the Gilpin Historical Society held their annual Cemetery Crawl. Tickets allowed the shuttle of hundreds of guests from the Teller House parking lot to the Cemetery. Depending on v... END_OF_DOCUMENT_TOKEN_TO_BE_REPLACED

Where the dead get to tell their story By Jaclyn Schrock On Saturday, August 21, the Gilpin Historical Society held their annual Cemetery Crawl. Tickets allowed the shuttle of hundreds of guests from the Teller House parking lot to the Cemetery. Depending on v... END_OF_DOCUMENT_TOKEN_TO_BE_REPLACED