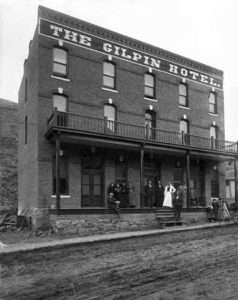 With teacher Phil Headrick giving the instructions, the student stagehands and lighting technicians at Gilpin County High School are preparing for the upcoming community talent show scheduled for April 5. The technical crew is composed of students from Betty Truitt’s speech class. The class is sponsoring the event. Details on the show can be found in the Bulletin Board columns.

It’s your chance to be a star! Enter the school talent contest and win money! Tryouts are Thursday, March 14, 4 p.m., in the gym. Prizes are $50 for first place, $35 for second, and $15 for third, in each of four categories: Elementary (preschool-6th grade), High School (grades 7-12), Adult, and Combined (all ages). Entry blanks are available at school or the Black Hawk Kwik Mart, and must be turned in by March 11. Entry fee of $1 will be collected at tryouts. The show will be April 5 at 7 p.m. The entire community is invited to participate in this fabulous show, sponsored by the school speech and drama class, the Gilpinite yearbook and the PTO.

Help is still needed to clear out the building for the Fire House. Mr. Emil Thiel has spent days doing what he can. Give him a lift if only for a few hours. It’s about time we have more adequate equipment in case of fires. Either contact Mr. Thiel or Fire Chief Carl Skagerberg.

Mrs. Louis Dukes was up from Denver, Tuesday, to spend the day and was accompanied by Mrs. Geo. Phillipps, and Mura Todd of New York City. Mrs. Phillipps is a graduate of the local high school and after her marriage lived here before going to Myton, Utah to make her home. It was indeed a pleasure to enjoy the reminiscence of interesting events of other days which seemed most vivid rather than remembering the number of years that have passed.

Letter to the Editor: Dear Mr. Laird, my husband has been reading the Register-Call since his confinement to a mental institution, and now that he is cleared, I wish to cancel his subscription.

Mrs. Even Jacobson was in Golden and Lakewood on a business and shopping trip last Friday.

We are happy to report that Ruth Blake is recuperating nicely from her recent operation.

An early morning fire at the Ferguson home in the Mayhew subdivision last Saturday was soon put out by neighbors who responded to the call for help. Considerable damage was done by the fire which was started by a burning log rolling out of the fire place.

Born: A little girl arrived last week to join the Hendricks Clan. She is Kathleen Don, born March 8th to Mr. and Mrs. John Hendricks of Denver. Mr. and Mrs. Ray Hendricks went down on Sunday to see their new granddaughter.

Mr. W. Grenfell has returned from Arvada, where he exchanged his wrecked auto for another make, hopefully in better shape.

County Commissioner John Hancock has been busy day and night trying to keep the highway open with the tractor and shovelers, and would have succeeded just fine if the wind did not drift the snow in the roads faster than they could shovel it out.

Mr. M. Reidl has taken the position as engineer at the Pittsburg Mine, which is about ready for operation.

Mr. and Mrs. A.M. Fairchild left for Denver Tuesday morning, returning that evening with a new auto, which the gentleman will handle in first class style in his trips over the mountains.

The Lillian Mining Company, who are operating the Lillian Mine in Russell District, have made another good strike of ore in the first, or 75-foot level, where the crevice has opened up nearly three feet in width, showing some fine looking ore, and shipments from this portion of the mine can commence at once.

The Denver Republican says: “The finest piece of ore of its kind in the world arrived in Denver last Thursday morning from Paris. It brought with it a special premium from the Paris Exposition. The ore is from the Topeka Mine near Central City, and was taken from the 800-foot level. The piece is about 14×14 inches, weighs 80 pounds, and is valued at $1,800. It is white quartz, filled with free gold. The management of the Paris Exposition paid the express on the ore both ways for the privilege of showing it. It is owned by Henry P. Lowe.”

Will Campbell, bookkeeper for the Sauer-McShane Mercantile Company, who has been confined to his bed on account of slipping and breaking a bone in his left ankle, is able to be out and about again attending to business.

Died: Antonio Leonardelli, of Black Hawk, who left there about a year ago for the San Juan country, was killed by a snow slide near the Nellie Mine on Bear Creek near Telluride on March 8th, 1901. Two companions were with him, but both escaped the avalanche. The body of Leonardelli was found the next day by a searching party. Deceased left a wife and son residing in Black Hawk.

Died: Thomas Drennan was killed in the Notaway Mine in Lake District Sunday evening about 9 o’clock by falling down the shaft. He was pump man for the West Notaway Company, and went to his work as usual that evening. A little before 9 o’clock, he started up the shaft on the bucket with Harry Couch and Louis Roy. Couch stood on the edge of the bucket with Drennan, while Roy sat in the bucket. The bucket was being hoisted slowly and carefully, and when within 25 feet of the collar of the shaft, Drennan let go his hold on the rope and dropped into the shaft, falling a distance of 525 feet into the sump, containing 30 feet of water. The men were let down the shaft, and after considerable work the body was taken out of the sump and sent to the surface. Harry Couch, who was on the bucket with Drennan, said that when the latter fell, that he seemed to let go of the rope as if he was limp, and that he made no outcry when he let go or was falling from which it would appear that he must have been stricken with heart disease, and that he was, to all intents and purposes, dead when he dropped. Deceased was 29 years of age, and had lived in Gilpin County nearly all his life, and is survived by his wife and two children. His funeral was held Wednesday from the Catholic Church, and was one of the largest attended in years.

A ball given by the German ladies on Friday evening, the proceeds of which, as well as those of the festival, were to be given to the widows and children caused by the Franco-German War, netted over $500.

Mr. P.B. Wright, proprietor of the Mountain House in Black Hawk, had allowed his name to be used as a candidate for alderman in the first ward.

Topping & Naylor were working the Slaughter House Lode on Prize Hill, and the last lot of ore from the shaft, only 80 feet in depth, ran 17 ounces gold to the cord in the stamp mill.

Mr. Bela S. Buell, connected with Chaffee’s Bank in this city, returned from a trip to New York the first of the week.

Langrishe’s troupe opened on Monday evening at the Montana Theatre for a week’s engagement, and the plays to be presented were: French Spy, Jartine, Angel of Midnight, the Wild Cat, and the Wishton-Wish.

Miss Fannie A. Nye, formerly of this city, had graduated from a Boston medical college, and was to go to Constantinople as a missionary in the employ of the American Board.

END_OF_DOCUMENT_TOKEN_TO_BE_REPLACED

Where the dead get to tell their story By Jaclyn Schrock On Saturday, August 21, the Gilpin Historical Society held their annual Cemetery Crawl. Tickets allowed the shuttle of hundreds of guests from the Teller House parking lot to the Cemetery. Depending on v... END_OF_DOCUMENT_TOKEN_TO_BE_REPLACED