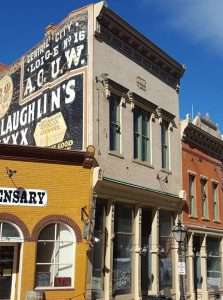 Elected to the Board of Directors of the Gilpin County Chamber of Commerce are Steve Boulter, Stephanie Lorenz, and Bill Plein. They joined the board earlier this week. The others are John Ficke, Reed Grimes, Barb Hilditch, Bonnie Merchant, Dick Allen, and Claire Tanner.
Alan Granruth has been hired as Central City’s historic preservation administrator. He will begin working on March.
Fort Lewis College student Ashling Larsen, an English and Communications major from Gilpin County, has been named to the Dean’s List. A student must have a grade point average of at least 3.4 and be taking a minimum of 14 credit hours in order to make the Dean’s List. Congratulations to Ashling!

Born: Frank Cooke, of Aspen Springs, is delighted to announce that she is a first-time grandmother—and it’s twins! Born February 23rd, on their mother’s birthday, are Charles Allen, 4 pounds, 1 ounce, and Steven Eric, 4 pounds, 6 ounces. Each measured 16 inches. Charles is the older, arriving at 2:58 a.m., while Steven took his time, finally making a grand entrance at 4 a.m. The proud parents are Todd and Kim Reitz, of Niles, MI. Grandparents Judy and Dave Reitz live in Buchanan, MI, and maternal great-grandmother, Naomi Fellows is a resident of Central City.

Died: Roman Anthony Allen Richards died of Sudden Infant Death Syndrome at his family’s Henderson, NV home on February 26. He was two months old. Born in Henderson on December 18, 1990, he was the son of Roman James and Paula Irons Richards, formerly of Black Hawk. He is survived by his parents, half-brother Roman James Ray Richards, and grandparents James A. and Marie Richards, who maintain a residence in Black Hawk.

People are getting bigger, but almost everything else is getting smaller in the wake of the compact cars. And even among people the small sizes are favored. The compact charms of Brigitte Bardot and the lead lure of Audrey Hepburn are preferred to the once popular ample attractions of Lillian Russell. So write Tom Mahoney, biographer of George Romney, president of American Motors, in “Almost Everything is Getting Smaller,” an American Legion Magazine article typed appropriately on the first compact electric typewriter, a half-size Smith-Corona. “Ours,” he writes, “is the compact age.”

The sympathy of the community is extended to Mr. Ralph Calabrese and family on the death of his mother in Boulder. She died of injuries incurred in an automobile accident. No further particulars are available before going to press.

Over the weekend Old Sol dropped over a foot of the beautiful white stuff on Central City. It was welcomed as the water sheds in Miner and other gulches from which the city receives its supply of water was low in water at the intakes. Today, Wednesday, the air is warm, the sun shining, and everyone is happy with the exception of motorists who neglected adorning their car with chains, and when driving on side roads, have a helluva time in getting out of the snow drifts.

The foot or more of snow that fell in this vicinity on Friday and Saturday last, added to that of Wednesday night, gives us all the moisture necessary for the present. The weather has been colder and more winter-like since that groundhog showed up than at any time during the winter months, but we are all looking for a change for the better in the near future.

People who have time to regulate the morals of others never have any time to look after their own.

Dr. William Mark Muchow, accompanied by Miss Hart, his secretary, arrived in Denver from Chicago Sunday, where they met Mr. A. L. Appleton, wife and daughter, who were returning from the Pacific coast, and all came up to Central that evening, remaining here while attending to business matters, until Tuesday morning, when they returned to Chicago.

Robert Pickens has returned from Denver with a truck, and will join the crowd that are hauling from the dump of the Topeka Mine, to the mill of the Chain-O-Mines Company in this city.

Mr. Jenkin Davis, who had been in Central for the past ten days  and was suffering from stomach troubles, left for Denver Sunday morning.

Died: Mr. John R. but better known as “Scotty” Hamilton, died at his residence in Denver on Wednesday of last week, aged 78 years, following a five week illness. Mr. Hamilton had been a resident of Black Hawk at least a half century, before moving to Denver some ten years ago, where he has filled the position as chief engineer for the Denver Fire Clay Company. While in Gilpin County he filled the position as engineer on many of the mines in this section, and in his later years worked and assisted as boiler maker in the Stroehle Boiler Works in  Black Hawk. He was a good workman, a pleasing, social gentleman, that anyone would be glad to take by the hand and wish him all the pleasure and happiness due us mortals, and the greeting would be returned with as warm a spirit, and a “God bless you.” He is survived by his widow, Mrs. Agnes M. Hamilton, three sons, James, who is in California, Alva, at Ruth, Nevada, and Chester, in Denver, and two daughters, Mrs. Margaret Logue and Mrs. Maude White, both of Denver. Funeral services were held on Saturday afternoon from the Rogers Mortuary, with interment in Crown Hill Cemetery.

Died: Mrs. Kate L. Trezise, a Colorado resident since 1886, died Monday at the home of her daughter, Mrs. Ethel Williams, east of Golden She had been ill for two months. Mrs. Trezise was born in Nancherow, St. Just, England, in 1861. She spent her girlhood there and after marrying Thomas Trezise, came to Bedford County, PA, in 1882. In 1886 they came to Colorado, first going to the Nevadaville District and then to a farm in the Fairmount District. She is survived by six children, Mrs. Ethel Williams, Lawry Trezise, Lester Trezise and Mrs. Jeannette Hemberger, all of Golden; Mrs. Anna Linder of Redondo Beach, California, and Reuben Trezise of Torrance, California.

Died: Mrs. Emma Morris, widow of the late Robert E. Morris, died on her ranch near Kremmling on Wednesday, February 25th, aged 81 years, two months. She leaves a family of six sons and three daughters to mourn her passing. James, Sam, and Lewis, who lived with her on the ranch; Tom and Emmett live in Kremmling; Harry of Hermosa Beach, California; and Anna Ellman, Emma Jacobs, and Clara Engle, all of Denver. Mr. and Mrs. Morris will be remembered by older residents of Gilpin County as they lived here for quite a number of years before moving to Kremmling 23 years ago.

The city council of the City of Central, have accepted the Seagrave Chemical fire engine, recently purchased in Denver. The tests made were satisfactory and the City is now equipped with one of the most modern fire-fighting appliances of that character.

Rev. S.A. Webber, pastor of the M.E. Church in Nevadaville, was agreeably surprised Tuesday evening by the arrival of a number of lady members of the church and friends, who made known their errand by presenting him with a handsome rocking chair as a token of their esteem for his faithful work and duties in the church.

Mr. John Heim, after a visit to Fatherland, came up from Denver on Tuesday on a visit with old friends, and while here was taken down with an attack of pneumonia, but under the care of Dr. Abe Ashbaugh, he is recovering nicely.

H.J. Hawley left for Denver Saturday afternoon to join his family on a visit with relatives at Argyle, Wisconsin, to be gone about a month.

The mason work on the new machinery building at the Buell property was finished last Saturday, and the three smokestacks were raised early this week. The finishing touches on the roof are being attended to, and the carpenter work on the gallows frame and timber work above the shaft is being pushed to completion.

Died: As a result of a fire at the mouth of the Molepole Tunnel just below Apex, Wednesday morning, which destroyed the mine buildings and filled the tunnel with smoke. Three miners, C.F. McNerney, A.T. Bellows, and W.H. Coltrin, who were working in the tunnel some 550 feet from the portal, lost their lives from suffocation. The fire was caused by a stove in the tunnel building which was used to draw out the smoke and gas after shots were fired, and after the buildings were destroyed, the mine timbers took fire, making a smoke that no man could stand, and the many efforts that were made to enter the tunnel and the crowd present, to help in rescue work were compelled to wait until the fire had burned itself out. Then men entered the tunnel and found the three men in the crosscut, 50 feet from the tunnel entrance, and brought them to the surface, where Dr. Ashbaugh, of this city, assisted by many present, used every means of resuscitation without avail, and the bodies were brought to the undertaking parlors of Ed. L. Harris, in this city, that evening, where they viewed by Coroner Dr. Richmond, who did not consider it necessary to hold an inquest. Mr. McNerney, who was operating the property for the Rond Hill Mining Company, was 45 years of age, and left a wife and two sons. A.T. Bellows was 51 years of age, and is survived by his wife. W.H. Coltrin was 34 years of age, and left a wife, two daughters, and one son.

Church Brothers and James Hitchens had leased the mill of the First National Company in Nevadaville, and were refitting it to treat ore by the Hitchens’ process.

Honorary Eben Smith had returned from a trip to New York, and was rejoicing over a long and favorable lease on the Gunnell group of mines.

Mr. N.P. Hill, head of the Boston & Smelting Company in Black Hawk, has consented to run for mayor of Black Hawk at the coming spring election.

Mr. Ed. A. Seiwell had announced himself as a candidate for the office of City Treasurer of Black Hawk at the coming city election.

END_OF_DOCUMENT_TOKEN_TO_BE_REPLACED

Benefitting the county, schools, and much more By Don Ireland   This year marks the 30th anniversary of casinos opening in the former little mining towns of Black Hawk, Central City and Cripple Creek, Colorado. In those early years, smoking was allowed inside ... END_OF_DOCUMENT_TOKEN_TO_BE_REPLACED