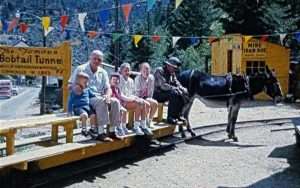 Following a short, closed meeting to discuss Superintendent Paul Coleman’s personnel evaluation, the Gilpin Re-1 School Board approved a new three-year contract for Coleman. Board President John Rittenhouse said that Coleman’s evaluation was “just short of superb.” Coleman’s salary next year will be $48,850. The evaluation, said Rittenhouse, is a matter of public record and is available to anyone. A raise was approved for Principal John Weishaar, also. He will be paid $44,450.

Have you ever wondered what those ruins in the ditch on the left-hand side of Lawrence Street, as you drive from Black Hawk to Central City are? Gregory Gulch looked quite different in 1910, and it will probably look quite a bit different again in a few years. The Gregory-Buell Consolidated Gold Mining & Milling Company shaft house was built over the 750-foot deep Buell Mine, one of Gilpin’s biggest gold and silver producers between 1872 and 1875. A whopping 35,000 ounces of gold and 100,000 ounces of silver is estimated to come from the Buell. All that is left standing today of this once massive operation are the remnants of the stone building that housed the boiler, machine shop and hoist. The company shut down in the mid-1920s, says Norman Blake, lifelong Black Hawk resident. His uncle, Otto Blake, tore down the shaft house around 1930 and the lumber and machinery were taken to the Chain-O-Mines near Russell Gulch. Bela S. Buell came to Gilpin County in 1860 as an agent for the Hinckley Overland Express. In 1861 he was elected the first Recorder of Mining Claims for the Central City District. That fall the county was organized and he was elected as the first Gilpin County Clerk & Recorder. Buell acquired his wealth by selling gold mines and organizing mining companies. He was one of the original incorporators of the First National Bank of Denver. In 1874 he was elected to the Territorial Legislature. He moved to Leadville around 1886, where he continued his mining ventures with men like H.A.W. Tabor and John Brown.

Happy birthday to Pancho Gates, who celebrated another year gone by earlier this week.

Mary Dolezal is on the mend after suffering a serious injury while using an electrical saw at her mid-county home recently. Mary was rushed to Lutheran Hospital, and although she’s already at work, the doctors won’t know until next week if Mary will lose her thumbs.

Married: Gary and Janie Felix are happy to announce that their daughter Samantha will wed Drew Goodlin at noon, February 23rd, at St. John’s Lutheran Church in Sinking Valley, Pennsylvania. The couple will honeymoon in the Caribbean. They will make their home in Pennsylvania.

A very pleasant evening was spent at the home of Mrs. Louis Carter last Thursday. Bridge and Canasta were played. Mrs. John Adamson of Denver was up for the occasion.

Sheriff Tom Collins left Tuesday for Buena Vista, Colorado, having in custody two Denver youths who had been sentenced to the Reformatory by County Judge A. Sterling Gilbert for an indeterminate sentence. Probation had been denied.

Mr. and Mrs. Robert Miller moved their trailer house to Berthoud, Colorado, on Monday and will make their home in that city.

Look out! Wood ticks are out. At least they were last week when it was so mild and sunny.

Mrs. Frank Gates who has been in ill health the past several months, was taken by ambulance to Porter Hospital in Denver on Monday. Betty Anderle, who has been nursing Mrs. Gates for some time, accompanied her to the hospital. Frank Gates arrived in Denver by plane from Oregon early Tuesday morning and found Mrs. Gates in a coma. Latest report is that she had rallied some by Wednesday morning.

Attorney Leroy J. Williams and wife came up from Denver Friday evening, the former to attend to legal matters while the latter visited with friends, returning home Monday afternoon.

Mr. and Mrs. W.O. Ziege motored to Denver Tuesday morning, on business matters, and to visit with relatives.

Mrs. J.G. Hughes is slowly recovering from her recent spell of sickness.

The Chain-O-Mines Company has a steam shovel and a fleet of trucks at work on the dump of the Topeka Mine, and are hauling the rock to the mill at Central for treatment.

Mrs. W. Grenfell and Mrs. G. Rudolph have gone to Arvada on a visit with relatives.

Miss Marion and Charles Wagner, Jr., came over from Boulder to spend the weekend with the folks at home.

Mrs. J.W. Jones was up from the valley and visited relatives here last week.

Died: Mr. Louis Ludin was taken to Denver several weeks ago, in order that he could have care and attention, and died on Saturday, February 14th, at the age of 68 years. For years he conducted a cobbler shop at his home on Lawrence Street, in this city, opposite the electric light works, and as old age and its infirmities gradually overcame him, he was taken to Denver, where he passed away as above stated. He is survived by a sister and other relatives living in Denver. His funeral took place on Monday, February 16th, with interment in Riverside Cemetery.

Died: Thomas Grenfell, familiarly known as “Tim” by his many friends, died suddenly of miner’s consumption shortly before noon yesterday at his home. He had been ill only a few days. Mr. Grenfell was 56 years old. Funeral arrangements in charge of Woods Mortuary, had not been completed last night. Mr. Grenfell was born in England and when a young man came to Colorado and located in Gilpin County. He was employed there as a miner until he came to Golden about twenty years ago. This city has since been the family home. Surviving Mr. Grenfell are his widow, Mrs. Margaret Grenfell; two sons, Thomas and Richard Grenfell; two stepsons, Will and John Harvey; and three stepdaughters, Mrs. Albert Webster, Mrs. Howard Jaycox and Miss Lucille Harvey, all of Golden. He also leaves a half-brother Richard Bennett of Golden. Mr. Grenfell was a member of the Foresters of America and the Golden Fire Department. The news of his death, which was wholly unexpected, came as a severe shock to his host of friends. –Golden Republican

Mr. John Hooper, of the Hidden Treasure Mill, left for Denver Saturday afternoon on a visit with his family over Sunday.

George H. Lanning, of the Register Call force, and family, went to Denver Saturday on a visit for a few days with relatives.

The shipments of crude ore, tailings and smelting ore from the Black Hawk station of the Colorado & Southern Railroad for the month of February to the smelters in Denver and elsewhere throughout the state, was 264 carloads, or 4,884 tons. In comparison with shipments for the same month of last year, there was a gain this year of 39 carloads, or 722 tons, a good increase for the second month of the new year.

Dr. Abe Ashbaugh was out to his Lombard property at Yankee Hill on Monday, and reports a nice body of ore showing in the lower tunnel, which is now in a distance of between 800 and 900 feet. The ore has opened up to a width of from 2 ½ to 3 feet and shows nice copper and lead, and an assay gave returns of $93.30 in gold, and with the values in copper, silver and lead brought up the values to $115 per ton. The doctor has maintained a vigorous system of development work on this group for some time past and has made it one of the best properties in the section.

The Gregory-Bobtail Mining Company is employing a good-sized working force in carrying out the extensive surface improvements on the Buell property at Mountain City. The new gear hoister of 150 horsepower is in place, as well as three boilers, with a combined capacity of 280 horsepower. The stonework on the new building, which will enclose the machinery, coal sheds and dynamo room is being covered. This building will be 60×100 feet, and its four sides are built of stone to the height of 26 feet. These surface improvements represent the outlay of a large sum of money, which, however, is justified by reason of the magnitude of the property to be operated by the company.

Married: In Central City, at the residence of the bride’s mother, February 25th, 1901, Rev. S.J. Rogers officiating, Mr. Edward Bates and Miss Edith Champion, both of this city.

It was reported that the contract for grading the railroad from Erie to Boulder had been given to Captain Mullen.

A letter was received from Senator Chaffee in which he said there was no hope of passing the enabling act for some time to come, but that he hoped to pass the bill enabling the citizens of Central, Black Hawk, and Georgetown to get title to their townsite.

A post office had been established at Arvada on the Colorado Central Railroad.

Fleming and Company had erected a whim on the Columbia Mine on Quartz Hill, and had commenced sinking the main shaft.

END_OF_DOCUMENT_TOKEN_TO_BE_REPLACED

Benefitting the county, schools, and much more By Don Ireland   This year marks the 30th anniversary of casinos opening in the former little mining towns of Black Hawk, Central City and Cripple Creek, Colorado. In those early years, smoking was allowed inside ... END_OF_DOCUMENT_TOKEN_TO_BE_REPLACED