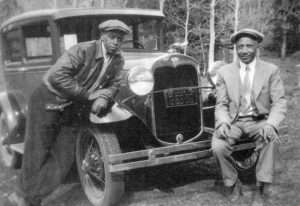 Richard McClellan, owner of Golden Gate Park and Ride, hopes to build a 10-acre, 1,250-car parking lot in mid-county, complete with a hospitality center, restrooms and shuttle service into Black Hawk and Central City. McClellan has a contract to buy a 27-acre commercial site on Hwy. 46, about half a mile east of Hwy. 119, south of the KOA campground. He submitted a sketch plan, aerial photo and county road map to the commissioners on Tuesday. The first phase would consist of 9.9 acres of paved parking for 1,250 cars, and 5.5 acres of landscaped buffer areas. Entrance to the parking lot would be from Charles Road. McClellan is working with Jefferson A. Forrester, who has applied to the Public Utilities Commission to operate Central City/ Black Hawk Stage Line, Inc., a shuttle service. The remaining acreage, east of Chalet Road, will be used for overflow parking and possible future development. A parking lot fits in with the commercial zoning of the land, but McClellan must get an encroachment permit from County Road Supervisor Eric Klemp in order to use Chalet Road for access. He must also apply for a sanitation permit and supply the county with an engineered drainage plan for the site.

Derek Morgan graduated from Texas Tech University in Lubbock recently with a bachelor’s degree in business administration. He is the son of Larry and Gretchen Morgan, of Dory Lakes.

Mr. and Mrs. Clifford I. Parsons left Wednesday for Denver and the following day boarded a plane for Phoenix, Arizona, where they will vacation for a couple of weeks.

Married: A very pretty wedding ceremony was solemnized last Saturday in Denver at the Francis de Sales Catholic Church, when Virginia K. McLaughlin was united in marriage to Dan Fruch, both of Denver. The bride is the oldest daughter of Delbert McLaughlin, and the granddaughter of Mr. and Mrs. George McLaughlin, formerly of this city. After the ceremony a reception was held at the home of the groom’s parents and was attended by scores of friends of the contracting couple, among them Mr. and Mrs. Joe Menegatti and son of Central City. We extend congratulations.

Little Rose Marie Mueller suffered a severe attack of asthma early Saturday and was taken to Children’s Hospital under oxygen for several hours, but is home now confined to her bed. Mrs. Addyman stays with her while Mrs. Mueller is at work.

Born: A baby girl was born Thursday to Mr. and Mrs. Bulgart. Mrs. Bulgart is the former Katherine Beggs.

Neil McKay, who had been visiting his son Reuben and wife in Denver for several weeks, returned to Central on Friday afternoon, to attend to business matters, and may conclude to make his home in Denver for the present.

Mrs. M. Ross has been confined to her home for several days from illness, and Mrs. Frank Thompson came over from Idaho Springs to attend to business matters until she recovers.

Died: From the News-Post, Monrovia, California. Robert E. Morris, brother of William E. Morris of Arcadia California, died suddenly Sunday, February 1st, at his home in Los Angeles. Mr. Morris, 37 years of age, formerly lived in Arcadia before entering the police service in Los Angeles five years ago. Mr. Morris was born in Central City, Colorado, August 13th, 1893. When he was 16 years of age, the family moved to Winslow, Arizona, where he became known as “Bob” when he started his railroad career as a call boy for the Santa Fe railroad. He rose rapidly from one department to another until, at the age of 25, he was yard master for the Oregon Short Line at Pocatello, Idaho. It was here that he affiliated with the Elks, becoming a member of B.P.O. Elks, No. 674. During the World War he enlisted in Company B. 113th Engineers at Ft. Ben Harrison, Indiana. He saw active service in France for many months, returning to his country late in 1919 with the 142nd Transportation Company. After the war he returned to railroad service for a few months, but in 1924 he entered the police training school from which he graduated with honors. He was assigned to duty in the traffic department where he served for more than five years. Mr. Morris is survived by his widow, Mrs. Marie Morris; a nine-year-old daughter, Roberta; one sister, Mrs. Ray McCormick of El Reno, Oklahoma; and a brother, W.E. Morris of Arcadia, California.

John Latimer of Black Hawk was seriously injured on Saturday afternoon by the overturning of a quartz wagon near the Sleepy Hollow Mine. He was thrown to the ground and one of the wheels passed over his left arm, which was so badly crushed that amputation was resorted to, by Drs. Richmond and Allison.

George Harris and Arthur Penna had a close call in the 600-foot level of the Freedom Mine, Thursday afternoon, when a large rock came out of the back of the level, striking Harris on the side of the head. Penna escaped with only slight bruises.

McLeod and company, working on the Kemp-Calhoun property at the head of Leavenworth Gulch, is making a 50-ton shipment of ore to the concentrating mills at Idaho Springs, and is also piling up a nice lot of smelting ore, which will later be shipped to the sampling works in Black Hawk.

Ex-Sheriff William Mitchell last Saturday sold his lease on the East Notaway property in Russell Gulch District, to Denver parties representing Connecticut and Pennsylvania capitalists. The price paid for the unexpired lease, which holds until January 20, 1902, was $25,000 cash. The new operators will incorporate as the Town Topics Mining Company, and intend to prosecute extensive operations. It is claimed there is $100,000 worth of ore blocked out. The property was idle for a number of years until Mr. Mitchell and associates took hold of it, and after considerable development work opened up a streak of tellurium ore which returned as high as $6,000 to the ton, and the property has been a good producer for the past two years. Mr. M. W. Draper has been secured to manage the property.

Langrishe & Waldron had added to their company Mr. C.W. and Miss Couldock, two of the best actors in the country, and they were playing such pieces as Dora, Chimney Corner, Othello, Limerick Boy, Willow Copse, and The Stranger, to crowded houses.

END_OF_DOCUMENT_TOKEN_TO_BE_REPLACED

Benefitting the county, schools, and much more By Don Ireland   This year marks the 30th anniversary of casinos opening in the former little mining towns of Black Hawk, Central City and Cripple Creek, Colorado. In those early years, smoking was allowed inside ... END_OF_DOCUMENT_TOKEN_TO_BE_REPLACED

Where the dead get to tell their story By Jaclyn Schrock On Saturday, August 21, the Gilpin Historical Society held their annual Cemetery Crawl. Tickets allowed the shuttle of hundreds of guests from the Teller House parking lot to the Cemetery. Depending on v... END_OF_DOCUMENT_TOKEN_TO_BE_REPLACED