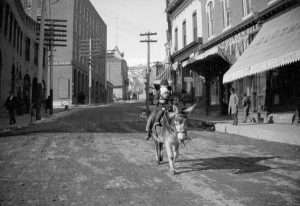 Gambling might come to the Teller House this fall if the right company is interested in leasing the historic structure, according to the Central City Opera House Association. Board Chairman J. Landis Martin said the board will consider leasing to “a well-capitalized company willing to make the innovations necessary to conduct the gambling and restaurant operations in a manner consistent with our opera festival needs.” The board believes it will take more than a million dollars to make improvements and purchase gaming equipment before gaming could begin at the Teller House. The decision to allow gambling was reached with difficulty, Martin said. Few gaming operations in Deadwood make a profit, he noted, adding that property taxes and other expenses in Central City will probably go up. Additional revenue will be needed to meet expenses. The association is looking for a suitable tenant, he said, and hoes to find one by the end of March. Completed in 1872 by Senator Henry Teller, the 4-story structure has 80 long-unused guest rooms and various ballrooms and salons. It is approximately 45,000 square feet. President U.S. Grant visited, as did Horace and Baby Doe Tabor, among many early day notables.

Amanda Norton and Nicole Quintana are the Central City Elks’ top teens for November and December. The girls are students at Gilpin County School.

On Monday, January 24, Central City Deputy Keith Coombes investigated a burglary at the Teller House. One or two cases of beer and about 20 bottles of liquor were missing. The burglar entered the Teller House from the garden sometime between 4:30 pm Sunday afternoon and 10:30 am Monday morning.

Mr. and Mrs. George Springer left last Friday for a vacation in Long Beach, California. Mrs. Frank Daugherty is in charge of the Drug Store in their absence. Store hours will be from 11:00 a.m. to 5:30 p.m.

Mrs. Laura Ress, County Superintendent of Schools, left Tuesday for Hawaii to visit her brother at Hilo. She will visit her son in Los Angeles on the way home.

Died: Mabel Robins, youngest of ten children of Bart and Esther Robins, was born in Black Hawk in 1883, and passed away in Denver January 28, 1961, at the age of 78 years. Her parents were early pioneers of the area, her father having served as Clerk and Recorder of Gilpin County for a number of years, before the present Court House was built. He later went to Aspen where he was killed in a mine. Mabel attended the local schools and grew to womanhood. In 1903 she was married to James F. Quinn of Black Hawk, where they resided for many years. After the decline of the mining industry, Mr. and Mrs. Quinn moved to Denver about 1915. In 1953 they had the honor of celebrating their Golden Wedding Anniversary to which many friends came to call. Mrs. Quinn is survived by her husband, James F. Quinn; three sons, Dr. Walter Quinn of Reno, Nevada, Irving and Vernon Quinn; and a daughter, Mrs. Leota Larson of Denver; also five grandchildren, three great grandchildren and numerous nieces and nephews. Mrs. Quinn was a woman of rare sweetness of character. In all relations of life, she was ever true to the highest ideals of duty, thinking not of herself, but always of others. Funeral services were held February 1 from Moore’s Chapel in Denver, to Crown Hill Cemetery.

Miss Leona Davey, of this city, had as guests on Saturday and Tuesday, Miss Irene Davis, from Lamar, Colorado, and Miss Madge Porter, from Iowa.

Mr. and Mrs. Paul Sheesley, of Kendrick, Colorado, arrived in Central on Saturday, on a short visit with Mr. P.J. Hughes, returning home on Tuesday.

Mr. P.J. Hughes, who spent a couple of months at Kendrick, Colorado, has returned to his first love, and is satisfied to spend the rest of his days in Central City.

Mr. and Mrs. Charley Cox motored over from Boulder on Wednesday last, and spent a few hours here visiting scenes of former days, and with friends.

Albert Lintz was summoned to Julesburg, Colorado, on Tuesday, on account of the serious illness of his daughter, Mrs. Lavelle.

Fred Backus, son of Marshal William Backus, of Black Hawk, was seriously injured on Saturday afternoon, after being run down by a tramway car for the Rocky Mountain Concentrator, causing injuries consisting of a compound fracture of the left arm above the elbow, and of the left leg above the knee. Dr. Richmond was called to attend to his injuries.

Sinking is being carried on at the shaft on the Gunnell Mine, with three shifts of miners, from a depth of 1,200 feet, and at the shaft on the Grand Army Mine the gasoline hoister was lowered this week and is being installed at the bottom level, with the intention of using it for hoisting the dirt from the shaft when sinking has commenced.

Lumber is being delivered at the Crown Point and Virginia Mine at the head of Virginia Canyon, for the purpose of retimbering the main shaft, and putting it in shape for production. The company operating this property has added to its holdings in Clear Creek County during the past week, but also purchasing the Silver Age holdings on Seaton Mountain, for which they paid some $100,000 for the same.

Died: Mrs. William Rhodda died last Friday in Denver, at the age of 50 years. For many years the family lived in Golden and this city, where Mr. Rhodda was a prominent mining man. Deceased was a sister of Mrs. W. Bennallack, of Mountain City.

The stained glass for the windows of the M.E. Church was reported as having arrived at Golden, for delivery to this city, by teams.

Alexander Cochran and George Fitzsimmons had leased the Smith & Parmalee Mill at Gregory Point, and were going to run it on custom ore.

A public appeal for help to the suffering people of France was being circulated throughout the country.

END_OF_DOCUMENT_TOKEN_TO_BE_REPLACED

Where the dead get to tell their story By Jaclyn Schrock On Saturday, August 21, the Gilpin Historical Society held their annual Cemetery Crawl. Tickets allowed the shuttle of hundreds of guests from the Teller House parking lot to the Cemetery. Depending on v... END_OF_DOCUMENT_TOKEN_TO_BE_REPLACED

Benefitting the county, schools, and much more By Don Ireland   This year marks the 30th anniversary of casinos opening in the former little mining towns of Black Hawk, Central City and Cripple Creek, Colorado. In those early years, smoking was allowed inside ... END_OF_DOCUMENT_TOKEN_TO_BE_REPLACED