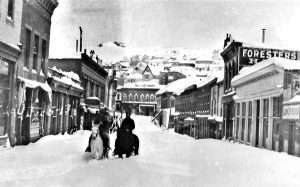 Born: Gene and Mary Taitt, of Central City, are the proud grandparents of a grandson, Jeremy Robert Sorenson. Born Jan. 20 at St. Joseph’s in Denver, Jeremy measured 21 inches and weighed 9 pounds 11 ounces. He joins brig brother Derek, 2 1/2, and parents Reed and Jeanne Sorenson, at home in Denver. Sam Sawie is Jeremy’s great-grandfather on his mom’s side of the family. He lives in Wisconsin.

Born: George and Sandy Hill, of Fall Brooks, CA, are the parents of a new son, Chasen Allen, born January 14th, 1991, in San Diego. He weighed in at 4 pounds, 6 and one-half ounces, and measured 17 inches at birth, and joins brothers Matthew and Lucas, and sister Chelsea. Grandparents are Mr. and Mrs. Bill Spellman, of Black Hawk, and Mr. and Mrs. George Hill, of Fall Brook.

Died: Patsy Meehan Ellis died January 17, when the car she was driving went into Clear Creek along Highway 6. She was on her way back to Central after a trip to Denver where she suffered a massive hemorrhage of the aorta just outside Tunnel No. 1. The accident occurred around 3 p.m. Born March 7, 1935, in Berlin, OK, she was the daughter of Nathan and Hazel Ruth (Harrington) Meehan. She attended school in Elk City, OK, and was a graduate of Oklahoma City University. After 20 years in the oil industry, Ellis became a real estate broker, and at the time of her death was a broker associate with Heritage West Realty in Central City. A past president of the Desk and Derrick Association, a prestigious oil organization, she also belonged to the 100 Club, Petroleum Club and the Executive Women’s Committee. She was past chairman of the Children’s Hospital Diabetes Foundation, and was active in the Republican Party, both in Denver and Central City. She was a committeewoman for the Gilpin County Republican Central Committee, and was involved for many years in county and state politics. During the years she lived in Gilpin County, Ellis was civic-minded, serving on numerous committees and organizations. At the time of her death, she served on the Gilpin County Historical Society board and was recording secretary for the Gilpin County Chamber of Commerce. She was a former member of the Gilpin County Arts Association, and briefly served on the Gilpin County Library Board. She was, until recently, secretary of the Central City Sister Cities Committee, and helped organize the Central City Opera House Association fashion show. She was involved in completing the 1990 census count in Gilpin County. Interested in history, Ellis enjoyed researching historical archives. She also loved animals and had several pets. Every spring she would give packets of sweet pea seeds to people throughout the community with instructions to plant them on St. Patrick’s Day. She often gave small gifts to friends—just because. She is survived by her brother, Donald Meehan, of Valdosta, GA, three nephews and a niece. Memorial services were held in St. Paul’s Episcopal Church in Central City, on Wednesday, January 23. She was cremated and will be interred in Oklahoma. Memorial contributions may be made to the charity of your choice.

Died: Mary Margaret Hixon died January 7, at a hospital in Phoenix, Arizona, at the age of 67. She was born March 26, 1923, in New York City, where she lived until moving to Colorado. She spent winters in Arizona. She and her husband Dan owned and operated the Glassblower in Central City for more than 15 years. Her husband preceded her in death about two years ago. Private family services were held in Phoenix. She is buried there. Survivors include her sons Dale and Dan Hixon, both of Phoenix, and their families.

W extend thanks to our new County Commissioner for this District, William O. Ziege, and Wm. Floyd, of Black Hawk, of the State Highway, in using their respective road equipment in grading and hauling away the drifts of snow and ice which has accumulated on each side of Lawrence and Eureka streets for the past several months. It really makes these streets in Central City a highway and citizens and motorists are exceptionally grateful.

The funeral for Earl Quiller, who died in Denver last week, was held Monday afternoon at the Masonic Temple, with interment in Bald Mountain Cemetery. Episcopal services were conducted by Father Kuenneth, with burial services at the grave. The Masonic Hall was filled with friends who had come to attend the last sad rites of one who had been admired and loved by all who knew him. Among the visitors from the valley we noticed: Henry J. Stahl, Harry Eilmann, L. Nathenson, Charles Webber, Mrs. Ray Isberg and mother-in-law personnel of many Commission Houses in Denver, and numerous brothers, companions, and Knights Templar of each Masonic order of which he was a member.

Mrs. Ethel Bolitho and Mr. Wm. Davey left Monday for their homes after attending the Earl Quiller funeral. They are sister and brother of Mrs. Quiller.

Mrs. Donna Blake and Mrs. Nancy Blake made the Mothers March for Dimes in Black Hawk on Monday.

Miss Carol Kent was up from Denver Friday and spent the weekend with Mrs. Luella Fritz.

City Marshal Addyman found a dark gray, hand-knit man’s mitten on the sidewalk a couple of weeks ago. The mitten is at the Hardware Store waiting to be claimed by its owner.

Mr. and Mrs. Thurman Leach spent several days in Denver this past week.

Reports are that Charley Pierce, an old employee of the Chain-O-Mines Company, is seriously ill at St. Joseph’s Hospital in Denver. He underwent an operation for hernia a couple of months ago, and came to Central last week, but was compelled to return to a lower altitude on account of heart trouble.

The industries of the United States may find it necessary to adopt a five-day week to restore the equilibrium between the labor supply and the demand for laborers. Unemployment seems to be increasing rather than diminishing and the substitution of machinery for hand labor is revolutionizing working conditions and throwing millions out of employment. Manifestly it is difficult for the five-day week to be brought about during an economic crisis like the present. It, like the proposed establishment of reserves for unemployment, is of permanent rather than temporary character. Many circumstances indicate that mere temporary measures are insufficient, although, of course, they first must be considered. The $116,000,000 appropriated by congress for speeding up public works appears, to me, inadequate. There are some signs of general business improvement, but the recovery cannot be quickly made. Meantime every agency, both public and private, must cooperate wholeheartedly to minimize the distress. Long-term advances to municipalities and states to enable them to carry on necessary public works may provide substantial relief, but there are difficulties in the way which may prevent the necessary legislation. –by U.S. Senator Robinson, Arkansas (Democrat)

Married: In Central City, January 27th, 1931, County Judge Louis J. Carter officiating, Fred Horey and Mrs. Nina Shaffer, both of Black Hawk. When the couple returned to Black Hawk, they were greeted by many friends, who extended congratulations and wishes for a long and happy future.

Miss Stella Presell, who is well-known in Gilpin County, has been appointed to the position of stenographer in the office of the Secretary of State.

Mr. G.M. Laird, proprietor of the Register-Call, left Thursday for Montgomery City, Missouri, having received a telegram that his father, who was 90 years of age, was seriously ill, as the result of a paralytic stroke.

Will Lugg, of Nevadaville, has taken a position with a meat market at Idaho Springs.

For the past two weeks the miners have been getting a better price for their stamp mill tailings, by the offers of the Kansas City Chemical Company for this product. The price heretofore has been $3.50 per ton for smelting charges, which has been reduced to $2 per ton, making a saving to the miners that will amount to many thousands of dollars during the year.

The Powers Mine, in Willis Gulch is being operated by W.J. Chamberlain of Denver and J.L. Hackett of Louisville, Kentucky, under a lease and bond. Sinking has been stopped at a depth of 250 feet, and as soon as a sump has been finished, the drifts will be extended both east and west from the bottom of the shaft. In the 150-foot east level a body of enargite ore some 12 inches in width has been opened up, carrying a heavy percentage of gray copper, and a shipment from this body of mineral was made to the sampling works last week, and another during the present week, from which good returns are expected.

Died: George W. Arthur, a former resident of Black Hawk, but of late years working in the mines at Leadville, was killed in the mines there on January 28, the result of an accident.

Monday’s issue contained an announcement that “tickets to all points east or west” were on sale by Frank Messinger, agent for the Union Pacific railroad.

Telegraph dispatches from the east brought the news that Paris had capitulated on the 27th day of January.

Lancashire Lass, Richelieu, Shocking Events, and East Lynn were among the favorite plays presented by the Langrishe Company, playing at the Montana Theatre.

A miner by the name of Sobey was seriously injured in the Bobtail Mine on Monday.

Died: George A. Karns was stabbed at Georgetown on January 29, while attempting to separate two belligerent Irishmen while fighting. His wound resulted in his death two days afterward.

Died: Word was received of the death of Mrs. Clara G. Case, wife of General F.M. Case, in Denver, the result of brain fever.