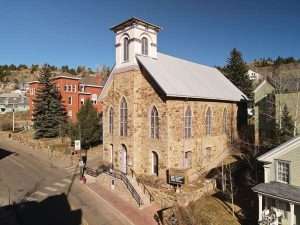 Many paused on Eureka Street last week to watch workers move pews from St. James Methodist Church out to the street. Once there, the pews were carefully positioned on dollies and rolled to William Stables for storage. No, the church isn’t closing for the season! The move is a matter of necessity for much-needed renovations, said Wally Gallaher, a St. James trustee. While removing the worn carpeting that had graced the auditorium for 90 years, the floor and understructure were found to need repair, said Gallaher. The project is expected to be complete in three weeks. The new Brinton carpet is being woven with the Axminister process in Kidderminster England, right now, The Axminister process is described in Webster’s Dictionary as a machine weave with pile tufts in various tufts and patterns. The new carpet is an exact replica of the one that is being removed in order to preserve historical accuracy. The old carpet will be cut up and given to church members, the Lace House in Black Hawk, and the Gilpin County Historical Society. Gallaher laughed when asked how much the competed project will cost. According to a book published in 1900, the carpet—new at the time—that is being replaced cost $300 and covered both the auditorium and lecture room. The price has gone up, Gallaher confirmed. On behalf of the trustees and church members, Gallaher expressed thanks to the Central City Opera House Association for use of William Stables to store the pews.

The Gilpin County Courthouse is NOT for sale—no matter what you may have heard about plans to move it out of Central City. The question was raised (and so were a few eyebrows!) at the county commissioners’ meeting on Tuesday.

Died: An 18-year-old Clear Creek High School student was killed Monday, apparently by a mountain lion. A female mountain lion was spotted a short distance from the body, and was killed by a Clear Creek County deputy sheriff. The student’s body was found about a third of a mile from the school. Just a week ago, a mountain lion was sighted in Idaho Springs, said a spokesman from the police department. It was seen with a deer it had killed. It is not known if it is the same cat that killed the student, or the same animal that was shot. Mountain lion attacks on humans are rare, but the Department of Wildlife has suggestions to help avoid confrontations with wildlife: make noise to let the animals know you’re there, and if you encounter a mountain lion don’t panic or make any quick movements, talk calmly to the animal, back slowly away, don’t crouch, and do not look the animal in the eye—it might take this as a challenge.

Earl Quiller was taken to St. Luke’s Hospital in Denver Monday morning, suffering from a heart attack. He was taken to Dr. Fowler in Idaho Springs, who ordered him immediately taken to the hospital in Denver, where he has been under oxygen since that time. It is the most fervent wish of his hundreds of friends that his stay in the hospital will be of short duration and that he will soon be back here in his place of business, cutting pork chops and stuff like that there for his customers. Hurry up, Earl, get better fast; we miss you.

Mrs. Earl Quiller returned from Denver Wednesday accompanied by her sister, Mrs. Ethel Bolitho, who will remain here with her during her convalescence from an operation on one of her eyes.

Married: Jeanne N. Borchard of Central City and Sgt. Robert Spellman of Lowry Field in Denver, were married Saturday at Idaho Springs. The bride is one of the owners of the Central Café and has been here for the past year. Her many friends in Central City extend congratulations and good wishes for the future.

Died: Funeral services for Mrs. Ella E. Mellor, former Gilpin County resident, were held Saturday at 2 p.m. in the Ollinger Mortuary Chapel at16th and Boulder Street in Denver. Interment was in Crown Hill Cemetery. Mrs. Mellor passed away January 18th, in St. Anthony’s Hospital, at the age of 87 ½ years to the day. Since 1936 she had resided in Arvada. She was widely known in Gilpin, Clear Creek, and Jefferson Counties. Born July 18th, 1873, in Joliet, Illinois, the deceased came to Golden in a covered wagon with her parents when she was six weeks old. She attended schools in the Golden area and was a graduate of Golden High School. In early days she taught school at Coal Creek and Smith Hill. She was married to William H. Mellor in 1893 in Denver. The Mellors lived in Black Hawk, Idaho Springs, and Lake Gulch in Gilpin County for many years. Mrs. Mellor was a member of First Church of Christ Scientist in Arvada. Frank J. Scholz, Christian Science Reader, officiated at the service. Surviving are two sons, William H. Mellor and Donald J. Mellor, both of Arvada; a daughter, Mrs. Dorothy G. Fulton of Boulder; five grandchildren and three great-grandchildren.

Deaths in Jefferson County exceeded births by a considerable margin, according to the annual report of Mrs. Hattie Snyder, county statistician. There were 227 deaths reported and 138 births. Mrs. Snyder explains that the preponderance of deaths is due to the fact that there are a number of tuberculosis sanitariums in the county. Golden is evidently healthier than the rest of the county, as there were 33 births and only 26 deaths during the year. –Golden Republican

On Friday afternoon, about 4 o’clock, a charge of five tons of giant powder was exploded in the “Glory Hole” in the “Patch” on Quartz Hill, breaking up thousands of tons of ore, which is now being put through the mill in this city. The shock was felt in this city, and buildings rattled as if an earthquake had visited the mountain. Everything connected with placing of powder and firing had been timed to the minute, and its success in shaking up the crevice of ore for future treatment was most satisfactory.

Sometime during the night or early morning of January 10th, parties entered the powder magazine of the Chain-O-Mines Company, at the mouth of the La Crosse tunnel, and stole some 20 boxes of giant powder, which carried 35 percent glycerin, and was 1-1/8 inches in size, used in the air drills operating in the mines. A truck must have been used to haul it away, as the 20 boxes weighed over 1,000 pounds. Up to present writing the thieves have not been apprehended.

How to Make Hot Egg Sandwich, by Nellie Maxwell: Cook six eggs in the shell until hard, remove the shells and chop fine. Add pepper and salt and a teaspoonful each of chopped parsley and capers, a tablespoonful of butter, a teaspoonful of cornstarch mixed in four tablespoonfuls of light cream. Cook until slightly thickened. Have ready slices of buttered and toasted bread on hot plates, fill the sandwich and cover with the egg and drawn butter or cream sauce. Garnish with sprigs of parsley. Add half a teaspoonful of curry powder to the creamed mixture if desired.

Queen Victoria died on Tuesday morning, surrounded by her children and grandchildren. America mourns with England over her illustrious dead, and the bitter cup of sorrow is as keenly shared throughout this country as in any one of the many sections of the universe over which she had control, and ruled so majestically.

Ross Hunderson, who for years past has been mining at Peck Flats, is reported as seriously ill at his cabin in that place.

James Eddy and Steve Trathen, of Nevadaville, left on Tuesday last for Cornwall, England, where they will reside in the future. Trathen is reported as having miners consumption, and was advised by his doctor to try a lower altitude.

William Kuhns, working at the Herbert Mine, on Quartz Hill, met with a severe accident on Friday last. Mr. Unangst was chopping wood at the mine, when the head of the axe flew off and struck Mr. Kuhns just below the knee cap, on the right leg, making a severe cut.

Died: John Turck, a Colorado pioneer and well known by the old residents of this city, died in Denver on Tuesday last. He came to this city in 1861 and engaged in the powder business, supplying the miners with powder for blasting purposes. Sometime in 1870 he moved to Georgetown, and at the time of his death owned valuable silver mines in that camp.

Thatcher, Standley & Company, bankers in this city, shipped out over 600 ounces of gold retorts, one-third of which came from the California Mine.

“Crazy Lem,” who killed Mr. Klein a few months ago, was adjudged insane, and was confined in the county jail.

The first rotary stamp mill to be introduced to the county was put in operation on the American Flag Mine, at Nevada, this week.

At a meeting of the board of managers of St. Paul’s Hospital, it was adopted in the by-laws that every patient able to do so should pay $6 a week for board, with physician’s charges, but no patient, if unable to pay, should be excluded from the wards.

END_OF_DOCUMENT_TOKEN_TO_BE_REPLACED

Where the dead get to tell their story By Jaclyn Schrock On Saturday, August 21, the Gilpin Historical Society held their annual Cemetery Crawl. Tickets allowed the shuttle of hundreds of guests from the Teller House parking lot to the Cemetery. Depending on v... END_OF_DOCUMENT_TOKEN_TO_BE_REPLACED