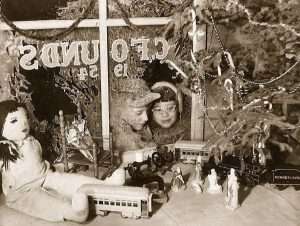 Died: Jude (Judith) Bowers died December 1, 1990, in Honolulu, in a car accident. She was born June 11, 1952, in San Antonio, Texas. She grew up in Portland, Oregon, and graduated from high school there. She moved to Gilpin County near Colorado Sierra from 1982-1985, and worked at Eldora ski area. She also worked as a waitress. She met her husband, Gary Bowers, while she was living in Gilpin County. After they married, the couple moved to Hawaii. Bowers’ sister, Molly Ann Kovalsky, lives in Boulder. She will be greatly missed by all who knew her.

Across the Crossroads, by A.F. Mayham: According to the old custom, turning over a new leaf to start the New Year is about as fashionable as a new dress. It is soon out of style. Some start with good intentions and trod the straight and narrow for a while, but admit that they have been pushed off the road a couple of times. A sweet expression, addressed of the milder sex, is appreciated by the lady who wears pants on most occasions, but quite often is the victim of being called beside sweetheart, some other invective that wouldn’t look good in print and sold to go to that place where a coal inspector isn’t necessary. Dispositions, like the weather, change according to circumstances. Blowing your top does no good, but often reflects injuries to the person who blows. Marriages are often broken up by the woman who thinks she can make a man over to suit her particular whim and that gives her a chance to call him something besides sweetheart—it happens in every family regardless of the new leaf. Very few women are ever ready when the time comes to go somewhere—there is always some extra “piddling” to do. Some have a habit of always being late, presumably to attract attention, and that attention gives rise to uncomplimentary remarks by what they term as “cats.”

Mr. and Mrs. Joe Menegatti and son spent the New Year’s holidays in Denver with her parents, Mr. and Mrs. George McLaughlin. A family dinner was enjoyed New Year’s Eve with 15 members of the McLaughlin clan in attendance. “Curley” was the M.C., and a wonderful evening was spent.

Mr. and Mrs. C.I. Parsons spent the weekend in Denver with relatives, the boss returning home Sunday evening and the postmistress the following evening.

Nevada Lodge No. 4, A.F. & A.M. celebrated the 100th anniversary of the lodge with a party with all the trimmings. A huge birthday cake with 100 candles made a brave sight. The Past Masters did a good job of blowing them out at one blow. A short history of the lodge, Christmas carols, a musical selection, a magician that had the children (older ones included) spellbound, Santa Claus and presents, and finally ice cream and birthday cake made the evening a big success, and we all hope that Nevada Lodge will have another 100th years party.

Mr. A.P. Bean of this city informs us he intends to start work on the famous old Crown Point Mine soon. He has been working on the organization of his company for some time and it will be known as the Weld O’ Like Mines Company and is being financed mostly by pipeline welders. Mr. Bean intends to work the Crown Point through the Big Five Tunnel and has only a short distance to go to connect the two workings. The Crown Point through the Big Five production record and the new company will be working in virgin ground. Mr. Bean has been a resident of this city for many years and roughly understands this mining district. He should be able to make a success of the new venture.

New Year’s Day was another perfect day in the mountains, and the oldest inhabitant never saw such beautiful weather for the whole of the winter season as we have had the privilege of enjoying, as the present one. There is very little snow on the mountainsides, the sun is bright and warm, and everyone is enjoying summer weather in wintertime.

Clear Creek, just below the New York Mill, has become clogged with ice and has spread all over the wagon road, making it necessary for the city to put a force of men to blast out the channel so that the water will have a chance to find its proper place again.

The Chain O’ Mines Company of Central City shipped a carload of high-grade concentrates on Tuesday, from Black Hawk to Leadville for treatment.

Died: Dr. Arthur J. Flynn, historian and educator, a former resident of this city, died in Denver on Tuesday last, as he was entering the Denver Young Women’s Christian Association building, on his way to a dinner, at the age of 71 years. He was born in Salisbury, New York, and came to Central City, leaving here some 25 years ago for Denver, to accept a position as principal of the Longfellow School. Later he became the principal of Valverde School, and recently retired to give his full time to archaeological research.

Dr. John Eisenhut, the centenarian of Leavenworth Gulch, moved on Monday to the residence of Johnson Quintrall, in Nevadaville, where he will remain during the balance of the winter months, and receive proper care and attention. On New Year’s Day, he experienced the unusual novelty of having lived in three centuries, as he was born in 1800, during the last year of the 18th century, lived through the 19th century, and has now entered the 20th century. His is a remarkable life, and with careful attention he may be spared several more years of life.

The Lynn residence, near Wilson’s barn on Eureka Street, was destroyed by fire Wednesday night, with a loss of $4,000, with $2,000 insurance.

Born: In Nevadaville, December 29th, 1900, to the wife of William Johns, a daughter.

Richard Jenkins and Thomas Lucas, carriers of the Registers, were calling on their subscribers on New Year’s Day, with their Carrier’s Address, and were well remembered in donations from them.

On Thursday, while a couple of girls were playing in a large packing box, near H.M. Orahood’s residence in Black Hawk, a whirlwind lifted the box, children and all, and deposited them some twenty feet away, right at the edge of a deep shaft.

The “Shoo-Fly,” which had been operating in Black Hawk, had been ordered closed up by the city authorities.

END_OF_DOCUMENT_TOKEN_TO_BE_REPLACED

Where the dead get to tell their story By Jaclyn Schrock On Saturday, August 21, the Gilpin Historical Society held their annual Cemetery Crawl. Tickets allowed the shuttle of hundreds of guests from the Teller House parking lot to the Cemetery. Depending on v... END_OF_DOCUMENT_TOKEN_TO_BE_REPLACED

Benefitting the county, schools, and much more By Don Ireland   This year marks the 30th anniversary of casinos opening in the former little mining towns of Black Hawk, Central City and Cripple Creek, Colorado. In those early years, smoking was allowed inside ... END_OF_DOCUMENT_TOKEN_TO_BE_REPLACED