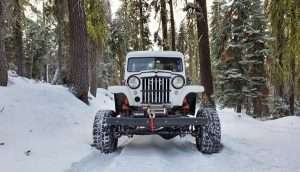 Colorado has a new set of rules for anyone planning to prospect or mine in Colorado. The state’s Mined Land Reclamation Board has revised rules that apply to notice requirements for permit applications, bond application, and include a new method for permitting regular operations. There is also a new rule requiring the marking of mine site boundaries. The rules become effective December 31, 1990, except the boundary marking rule, which goes into effect August 1. Copies of the revised rules may be purchased from the Mined Land Reclamation Division Office, in Denver.

Marrying: Jonlee Shane Anderle and Cheri Camile Alexander will exchange wedding vows December 22, at Walden Community Church, in Walden Colorado. Jonlee is a 1987 graduate of Gilpin County High School. He is employed by U.S. Welding and attends Metro State College. Joe and Ruth Ann Anderle, of rural Gilpin County, are Jonlee’s parents. He is the grandson of Winnie Anderle, of Black Hawk. Cheri is a 1986 graduate of Walden High School, and is employed by the office of the Jackson County Assessor. She is the only daughter of Ray Alexander of Walden. The couple will be at home in Columbine, CO, after the first of the year.

Died: Bernice Fredregill, 73, of Dalton, Georgia, died December 16th, 1990, in Chattanooga, TN, of pulmonary complications. Many Central City residents will remember Bernice, who, with her husband Charles, operated Paul’s Beef Bar in Central City in the early 1960s. She retired from Texas Instruments, located in Dallas, approximately 12 years ago. After traveling in the states and Europe, she made her home in Georgia. Services and interment were in Dalton, GA, on Tuesday, December 18. She is survived by three daughters, Joanne Hartman, Lucky, OH, Jane Woodring, Black Hawk, CO, and Louise Dunlop, Dalton, GA. Also surviving are 15 grandchildren and numerous great-grandchildren.

Across the Crossroads, by A.F. Mayham: It takes a long time for a tree to grow. From reports and observation the cutting of trees exceeds the growth, and it may not be long before a ban will be inaugurated against cutting just for Christmas decorations. And while the tree may be ornamental and sentimental for a few days, it is then confined to a bon fire. Lots which sell trees every year seem to be over stocked, and added to the private cuttings, the waste of future lumber is startling. Perhaps instead of a fir or pine tree, aspen could be substituted, dolled up to suit. The aspen grows fast and isn’t of much use commercially except to build a mountain cabin or fence, and then it has to be treated chemically to make it last a few years. The Christmas tree fad is about as outmoded as the fireplace where Santa with his pack used to descend and land smack on his back.

Dr. and Mrs. Lester Oliver, of Caldwell, Idaho, and his mother, Mrs. E.S. Oliver, of Denver, and Mrs. Susie McGrath, of Denver, were visiting friends in Central City on Monday.

Mr. and Mrs. George Anderle, Jr., of Bell, California, welcomed the arrival of a second daughter, December 3rd. She has been named Tamara Jean. Congratulations!

Clarence Stroehle came over from Boulder Friday, to spend the holiday season with his parents.

Miss Irene Gibbons will spend the holiday season with her father and sister at Boulder.

The mass meeting held at the city hall on Friday evening of last week to discuss and consider the question of making a change in the charter of the city, whereby considerable expense could be saved by consolidating the different wards of the city, in collecting the taxes and other matters of that nature, was well attended, and good and sensible arguments presented in favor of such a change. Another meeting is to be called later on, when something definite will be determined upon.

Died: Mrs. E. L. Harris. Wednesday morning’s Denver news contained an item to the effect that Mrs. Nettie Harris, wife of Ed. L. Harris, collapsed on the sidewalk at South Washington Street and East Virginia Avenue, Tuesday, and died in the ambulance as she was being taken to the hospital. A heart attack is believed to have caused her death, at the age of 66 years. In addition to her husband, she is survived by five daughters, Mrs. William F. Preville, Mrs. George Wenzel, Mrs. Alfred Lake, Mrs. Fred Norberg, and Mrs. John McNulty, all of Denver; and three sons, Robert M. Harris, Oakland, California, Edward L. Harris, Jr., Chicago, and George D. Harris, Denver.

Died: In Denver, at St. Joseph’s Hospital, December 21st, 1930, Mrs. Martha A. Hesselwood, widow of the late Robert Hesselwood, aged 80 years. The family has been residents of the county for over fifty years, and were well-known and esteemed by all who knew them. Mr. Hesselwood came to Gilpin County just after the close of the war, and was married here, and they have here resided all those years. Deceased was taken to Denver on December 12th, suffering from a broken hip, the result of a fall at her home, on Eureka Street, where she could have care and attention, but other complications followed, which resulted in her death. She is survived by three sons, Robert, now on the western coast, and Wilbur and George, the latter two residing in this city. Funeral services will be held this Friday afternoon from the Young Mortuary, Denver, followed by interment in Fairmount Cemetery.

Mr. E.A. Nicholls, wife and son returned Wednesday, after spending the holidays with relatives in Denver.

Miss Nellie Tolman of Cripple Creek is visiting her parents, Mr. and Mrs. A. H. Day of this city, over the holidays.

Mr. and Mrs. Peter Markin were up from Denver during the week on a visit with her parents, Mr. and Mrs. John Loughran.

Mrs. George E. Collins and son left for Denver Monday morning, on a visit with friends.

Miss Kirkpatrick, who had been visiting her cousin, Mrs. James Holck and family, for the past two weeks, left Sunday for her home near Kansas City.

Mr. H.C. Eastman, manager of the Ontario-Colorado Mining Company, operating the O’Neil Mine on Gregory Mountain, gave a banquet to the employees of the company at the Teller House on Monday evening, and with the guests invited, the number totaled 75 who enjoyed the occasion.  During the evening the employees presented manager Eastman with a beautiful diamond locket, one side being native gold quartz, studded with a diamond, and on the other side beneath the glass were pieces of nugget gold. Mr. Herbert C. Bowden, the mine supervisor, was presented with a handsome meerschaum pipe, case and tobacco pouch.

Died: Sidney Dunn, of Nevada District, was killed Monday night, by the overturning of a wagon. He, in company with Frank Cody, were returning from Russell Gulch, where they had delivered a ton of coal, and as a blizzard was raging at the time, the horses left the road and upset the wagon at the bridge at the head of Spring Street, Dunn being caught under the wagon seat and crushed to death. Cody was thrown free from the wagon, and escaped serious injuries.

A week’s work at the Suderburg Mine turned out 16 cords of ore which was treated in the stamp mills, returning a check for $2,970, and during the same time 30 tons of smelting ore was hoisted, which was sold to the smelter in Black Hawk for $1,350.

The thermometer at Greeley on Thursday last registered 36 degrees below zero.

Died: Lorenzo M. Bowman, a well-known colored man, died in Georgetown Monday, aged 55 years. His death resulted from the accidental discharge of a pistol, which fell out of his pocket. He was credited with discovering a number of the richest lodes in Gilpin and Clear Creek Counties, and built the first smelting furnace in Clear Creek County.

END_OF_DOCUMENT_TOKEN_TO_BE_REPLACED

Where the dead get to tell their story By Jaclyn Schrock On Saturday, August 21, the Gilpin Historical Society held their annual Cemetery Crawl. Tickets allowed the shuttle of hundreds of guests from the Teller House parking lot to the Cemetery. Depending on v... END_OF_DOCUMENT_TOKEN_TO_BE_REPLACED