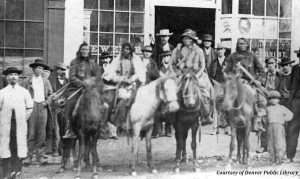 The Register-Call is the winner of three awards in this year’s Colorado Press Association statewide newspaper contest. This summer’s Gilpin County Visitor’s Guide has been declared one of the three best produced by the staff of a Colorado weekly newspaper with readership of 1,750 or less. There are 54 such newspapers in the state. Bev Nelson took an award-winning photo of Central City firefighter Clarence Douthett dousing a burning building at the National Mine, and for the second year in a row, the Register-Call has won an award for advertising. The winning ad, created by Nelson and Claire Tanner, was a promotion subscription to the paper and featured an antique photo. The staff won’t know until February 23 if the awards are first, second or third places. The announcements will be made at the annual convention of the Colorado Press Association.

Dear Readers, Hi! My name is Dave Vosmera. I am a fifth-grade student at Wyco Elementary School in Northglenn, Colorado. Our class is studying geography and history of the United States. We would appreciate it if you would send us postcards from your state or county so we can learn more about our country. Thank you for your help! Sincerely, Dave Vosmera.

One of the most dastardly and rotten acts ever perpetrated occurred Monday night when three or four young hoodlums living outside Central City pulled down the strings of electric colored lights from the 25-foot Christmas tree, erected two days previous at the intersection of Lawrence, Main, and Eureka streets, dragging one string down the street as far as Ramstetter’s grocery, breaking the wire and destroying the bulbs. The same vandalism happened in Black Hawk, apparently on their way out of town, and the strings of lights on the tree in that place were pulled down and scattered along the highway. We understand that in Nederland the same rotten acts were carried out, with the addition of throwing stones through the plate glass windows of the business houses. Adding to their “fun,” they broke off several highway signs along the highway, apparently to be used as souvenirs. We wonder why such vandals can desecrate the meaning of the Christmas season by such vandalism. Sheriff Tom Collins, acting on a very small shred of evidence, has obtained a warrant for the arrest of one of the participants, and through him will obtain the names of his cohorts. We hope, when they are apprehended, which the Sheriff says will be before the County Court, the Judge will demand the maximum sentence, and hold them guilty with a jail sentence of 30 days or more.

This week’s Denver papers carried the death notices of Ralph Kullerstrand and Guy Morrison, both of whom lived in Central City years ago.

Mrs. Mary Blake is visiting her granddaughter, Elizabeth Branecki and family at Orange County, California, but will spend Christmas with her son, Edward Blake at Las Vegas, Nevada.

Another week of most pleasant and agreeable weather for this time of the year, cutting short another week of what was last year a pretty tough spell of winter. The warm sunshine is melting the snow on the main roads and highways, and the roads are getting in better shape than for some time past.

One of the most sensational murder trials ever held in Denver, or in the state, was brought to a close on Monday night last, when the jury brought a verdict of guilty against Mrs. Pearl O’Loughlin, for the murder of her step-daughter, Leona, which pronounced a life sentence in the state penitentiary. Never has a case such as this one claimed the interest and attention of the people of the whole state, and the general verdict of almost everyone was that she was guilty of the murder of the little child, but her actions on the night of the murder had been so carefully concealed by her, that the true facts may never be known. The jury was out only an hour and thirty-six minutes before they rendered their verdict.

Mr. and Mrs. W. O. Ziege left for Denver Wednesday morning to attend the funeral of Mrs. Eugene Drake, which was held that afternoon.

County Treasurer Hugh Lawry is confined to his home by an attack of cold and la grippe, but is getting along nicely and expects to be able to attend to his duties after a week’s rest.

Charles Niccum returned from Colorado Springs on Monday, where he was summoned last week by the death of a sister.

The Chain O’ Mines Company in Central City loaded three cars on Tuesday, of high-grade concentrates from their mill, for shipment to the smelters at Leadville.

Otto Blake received a letter from Denver Wednesday noon, saying that Mr. Charles Baer, of Apex, who underwent an operation last week, was getting along fine, which is good news to Mr. Baer’s many friends in Gilpin County.

Mr. Will Lugg, of Nevadaville, left Wednesday morning for Golden, on a visit with his folks. He contemplates going into business at Idaho Springs.

A surprise party was given last Saturday evening by some of the neighbors and friends of Mr. and Mrs. William Quiller, in honor of their crystal wedding anniversary.

Born: In Central City, December 11th, 1900, to the wife of Mitchell Griffith, a daughter.

Died: Thomas Barnes died in Georgetown on Saturday last, at the age of 70 years. He came to Central City in 1860, and in partnership with Billy Jones, conducted the billiard room, which was built alongside the old Montana Theatre, on the ground occupied by the Mellor business block. He left here in 1876 and located at Georgetown.

No coaches were hereafter to be run from here to Denver and Georgetown on Sunday, and no trains were to run between Denver and Golden on Sunday.

The O.K. Mine at Georgetown shipped a lot of ore to the Hill smelter in Black Hawk, which ran 1,000 ounces silver to the ton.

The festival given for the benefit of the M.E. Church netted about $525.

Mr. Harley B. Morse left for the east on Saturday, to spend the winter months.

The festival given by the Catholic ladies of the county, was one of the most successful ever given in the county, netting over $1,000. The diamond watch was won by Mr. McCann, of Georgetown, who requested that it be given by the committee of arrangements to Miss Katie Smith, who got up the raffle.

Several changes were made in the force of teachers at the public schools, Miss Bartlett resigning, and Miss Simms was promoted to her place. Miss Perrin of Russell Gulch was appointed to the primary department.

A new and immensely rich pocket of silver ore had just been struck in the Caribou Mine. In one day, from 4 o’clock in the morning until 11 o’clock, four men took out 28 sacks of ore, which were estimated to be worth $5,000, the ore being of the same character as a lot sold to the Hill smelter in Black Hawk, that assayed1,000 ounces of silver to the ton.

Thatcher, Standley & Company, bankers of this city, shipped 600 ounces of gold on Thursday, making their shipments for the month about $30,000. 245 ounces came from the California Mine, 100 ounces from the Rhoderick Dhu Mine, and the balance from the Prize, Fisk, Gardner, and Kansas Mines.

The mercury in Denver stood at 16 degrees below zero on Thursday morning. Eight degrees above zero was the lowest point recorded at the Best Pharmacy in this city, at the same time.

Died: Samuel A. Buell, a prominent citizen and businessman, shot himself on Monday evening, the ball passing entirely through his brain. He had been suffering severely for several months from a pressure on the brain, causing occasional insanity, and it was believed that while suffering from one of these spells, he committed the deed.

END_OF_DOCUMENT_TOKEN_TO_BE_REPLACED

Benefitting the county, schools, and much more By Don Ireland   This year marks the 30th anniversary of casinos opening in the former little mining towns of Black Hawk, Central City and Cripple Creek, Colorado. In those early years, smoking was allowed inside ... END_OF_DOCUMENT_TOKEN_TO_BE_REPLACED

Benefitting the county, schools, and much more By Don Ireland   This year marks the 30th anniversary of casinos opening in the former little mining towns of Black Hawk, Central City and Cripple Creek, Colorado. In those early years, smoking was allowed inside ... END_OF_DOCUMENT_TOKEN_TO_BE_REPLACED