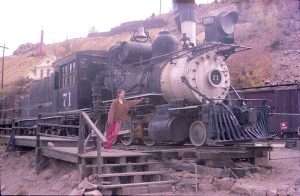 Richard Glenn Tolbert pleaded guilty to second-degree murder last Friday in connection with the killings of Luther “Luke” Clyburn and John McDaniel, whose bodies were recovered from a mineshaft near Central City this summer, nine years after their deaths. Two weeks ago Charles Arthur “Chuck” Morgan entered a plea of guilty to a charge of manslaughter in the same case. The men were originally charged with first-degree murder and violent crime. Those charges, however, were reduced in exchange for testimony about their and others’ involvement in the August 1981 killing of Clyburn and McDaniel. Sentences are to be handed down to both men in District Court in Central City on December 14. They are being held at the Jefferson County jail pending final sentencing.

Died: Marlin M. Belcher, of Golden, died at 3 a.m. November 15th, 1990, at Castle Gardens Nursing Home in Northglenn. He was 79. Born June 4, 1911, in Black Hawk, he was the son of Thomas and Hilda (Skankee) Belcher. After graduating in 1930 from Gilpin County High School in Central City, he worked at various jobs in the county. During WWII, Mr. Belcher was employed at Beech Aircraft Co. in Wichita, Kansas. After the war, he returned to Black Hawk, where he married Dollie Nelson on October 1, 1946. He went to work at Coors Porcelain Plant as a machinist in 1949, retiring in June, 1976. Mr. Belcher is survived by his wife, Dollie, of Northglenn; sons George, of Federal Heights, and Wallace, of Black Hawk; sisters LaVerna Mitchell and Gwen Thomas, both of Gilpin County; six grandchildren, seven great-grandchildren, and niece, Donna Johnson. Funeral services were held at Woods Mortuary Chapel in Golden on November 17th, with graveside services at Dory Hill Cemetery. The family suggests memorial contributions to the American Heart Association.

Died: Mildred Addyman, former resident of Black Hawk, died November 8th, 1990, at Oceanside, CA. She was 90 years old. Preceded in death by her husband Roy Addyman, and a son, Paul, Mrs. Addyman is survived by a son, Gerald; and five daughters, Ellen, Dorothy, Klytia Mae, Evelyn, and Mary Ann. She is also survived by numerous grandchildren and great-grandchildren.

Across the Crossroads, by A.F. Mayham: The public, at times, is subjected to the most indiscriminate episodes. For a while, Khrushchev was prominent, the papers were full of election, then Kennedy as President elected, then Castro and now we have turkey displacing all these things and the turkey will occupy the attention of the public for the next month in company with Santa Clause. Santa, usually of late, gets the publicity even before Thanksgiving, all for commercial purposes of course. The meaning of the occasion had been lost of subjugated, relegated and dethroned in favor of the Almighty Dollar. All it means to kids is “What do I get for Christmas?” Churches will be decorated to suit the occasion and striped peppermint candy will be the piece de resistance. There’s one town in Colorado blessed with churches—Paeonia— with 1,000 population has 17 churches. Stores in Denver have some unique displays with a woodland orchestra made up entirely of wild animals playing different instruments except the bear that swings happily in a hammock listening to the harmony.

At a trial held before Judge Sterling Gilbert of the County last Friday morning, Daniel L. Haven, of Denver, was found guilty on charges of resisting arrest, destroying county property, and disturbance, and was fined $185 and costs and sentenced to 60 days in jail. The jail sentence was suspended on the condition the fine and costs were paid. Haven was accused with two other young men who were charged with being drunk, disturbance, and destroying county property on Sheriff Tom Collins’ car, particulars of which was mentioned in last week’s issue. The other two were fined a total of $20, but Haven decided he needed legal counsel, pleaded not guilty, and elected to again stand trial. He paid the costs and left a humble but wiser young man.

Mr. and Mrs. Carl Skagerberg returned Tuesday evening from an extended visit with relatives and friends in Oregon and California.

The heavy windstorm on Monday evening did no damage in this section, but helped wonderfully in scattering snow all over the mountains, making drifts that were not appreciated by motorists. Since that time, the weather has been fairly good, and has the endorsement of all the mountain people.

Died: John B. McKay died at the Presbyterian Hospital in Denver, November 20th, 1930, aged 74 years. Mr. McKay was born in Prince Edward Island and came to Colorado in 1876, and in connection with his brother, Dan McKay, operated the Leavenworth Mine, from which they took out a fortune, and both left for Wilcox, Nebraska, where each one homesteaded a section of dry land. Deceased returned to Central City in 1900, and was manager of the Jenkins-McKay Hardware Company in this city until 1923, when he went to Billings, Montana, to reside with his daughter, Mrs. Bonnie Johnson. Three years ago he was brought down to the Presbyterian Hospital in Denver, where he died, and at the funeral all the pall bearers were old friends and neighbors formerly from Gilpin County. Funeral services were held from the Rogers Mortuary, Denver, on Monday last, interment in Fairmount Cemetery. He is survived by a daughter, Mrs. Bonnie Johnson, of Fort Morgan, Colorado; two sons, Claude, of this city, and Fail, of Los Angeles, California.

Died: Lillie Spear died at the home of her sister, Mrs. Milla Fraser, in Denver, November 29th, 1930, aged 51 years. Deceased was born in Central City, the daughter of William and Elizabeth Spear, and spent her girlhood and young womanhood in this city, moving to Denver some nine years ago, and has been employed as a Madam in one of the department stores there ever since. She is survived by a sister, Mrs. Milla Fraser, of Denver, with whom she had made her home of late years; two other sisters, Mrs. Emma Bennett, of Lead City, South Dakota, and Mrs. Mary Rose, of Hereford, England. Funeral services were held at the Rogers Mortuary on Monday afternoon, followed by interment in Crown Hill Cemetery.

Died: John Terrill, a former resident of this city, died in Denver, November 19th, 1930. He is survived by his widow, Susan M. Terrill; a daughter, Mrs. Thomas J. Williams, of Arvada; two brothers, Harry Terrill, of Grand Junction, Colorado, and John Terrill, of Denver; and a sister, Polly Terrill, of England. Funeral services were held from the Rogers Mortuary in Denver, on Saturday, interment in Fairmount Cemetery.

Mr. Charles H. Karns and bride arrived in Central on Tuesday evening of last week, and have commenced keeping house in the new Heim residence on West High Street. Mr. Karns is well known in Gilpin County and has a lot of friends who wish him and his bride happiness and prosperity in the many years to come. Mrs. Karns is Mayme F. Tapscott, of Spencer in Gunnison County, Colorado.

Messrs. C. Fina and Walter Easley had a narrow escape while working in the Cook Mine last Saturday morning, when a rock fourteen feet long, seven feet wide, and weighing many tons, escaped from the wall and partly caught and covered both men. Fina escaped with a few bruises and scratches to the face and legs, but Easley had his left leg badly broken below the knee.

Two shifts are working on the Galena Mine, which is being operated by the Alpha Company, under the management of Mr. Grant. Drifting is being carried on in the east and west 625-foot levels, where a fine crevice of mineral is showing up. Enough milling ore is being hoisted daily to keep 10 rapid drop stamps engaged at the Eagle Mill in Black Hawk, and regular weekly shipments of smelting ore are being maintained, both classes of ore giving satisfactory results.

The shaft on the First Centennial Mine in Chase Gulch has been timbered in good shape from the surface down to the bottom, a depth of 375-feet below the adit level. A pump station has been cut out in the fifth level, and as soon as this work is completed, sinking will again be commenced with the intention of going 100, if not 200, feet deeper before stopping. Levels have been started at the bottom of the shaft to open up the bodies of ore that have been encountered in the upper levels, and regular shipments will soon be maintained of both mill and smelting ore.

Judge Belford and G.B. Reed went hunting on Thanksgiving Day south of Clear Creek, the latter bringing down a deer that weighed 200 pounds.

The ladies and gentlemen of the Congregational Church contemplate giving a festival in the basement of the church, and have appointed the following committee to take charge of the affair: On entertainment, Mrs. H. Brastow, Mrs. W.B. Rockwell, Mrs. Sweetzer, Mrs. J. Alden Smith and Mrs. A.J. Van Deeren. Soliciting committee, the Misses Cleveland, Nellie Laven, Emma Smith, Mrs. Sabin, Mrs. Crane, Mrs. Roy, Mrs. Clinton Reed, and T.H. Potter and T.J. Campbell. The committee was instructed to receive everything, from oysters to greenbacks.

Mr. W.B. Jenness, marshal of Black Hawk, had a warning notice in the paper to the effect that all persons who had no visible means of support, and were found loafing about saloons, would be given ten days to secure work, or they would be arrested and prosecuted as vagrants.

Wednesday’s issue had a write-up of the Caribou Camp, which was the scene of a great deal of mining activity, and mention was made of Mrs. Wilson of the Caribou House, Mrs. Lyons of the Snively House, Mrs. Gilligan, Mr. Berger, John C. Miller, Tony & Fritz Press, W. Pierce, Leo Donnelly, Sears, Werley & Company, Major Bard and O.B. Cutter.

The firm of Goldman & Company, composed of Elias Goldman and G. and A. Falk, was dissolved by mutual consent, with Mr. Goldman assuming the entire business.

In the murder case of the People vs. Richard Mackey, a change of venue to Arapahoe County was allowed by Judge Belford.

Major Bigney was making a canvass of Gilpin County for his Colorado Gazetteer, which promised to be an exhaustive work.

END_OF_DOCUMENT_TOKEN_TO_BE_REPLACED

Where the dead get to tell their story By Jaclyn Schrock On Saturday, August 21, the Gilpin Historical Society held their annual Cemetery Crawl. Tickets allowed the shuttle of hundreds of guests from the Teller House parking lot to the Cemetery. Depending on v... END_OF_DOCUMENT_TOKEN_TO_BE_REPLACED