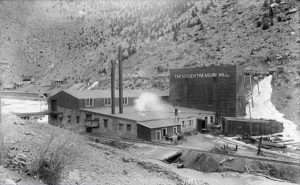 All decked out in Christmas finery, the Lace House in Black Hawk will be open throughout next weekend’s annual Wintershire festival. “Christmas for the Young at Heart” is the theme, and antique toys and dolls from Christmases past are featured, along with four ethnic decorated Christmas trees. The Lace House will be open from 10 a.m.-10 p.m., Friday through Sunday, November 23-25, with a bake sale that includes some outstanding goodies. If you would like to donate baked goods, call Mona Dawkins. Proceeds will benefit the Lace House.

Congratulations to Craig Armbright from the staff of Gilpin County School. Craig recently completed requirements for graduation and has received his diploma.

Saturday night was eventful at the mid-county home of Pat and Jack Wendleton. It was 1:30 in the morning when Pat woke up to the sounds of the family dog and cat howling like crazy. Then she heard what sounded like a prowler, so she called the sheriff’s office. A thorough check of the premises turned up signs of a prowler all right—believed to be a rather large bear.

Bev Nelson has made it through another year. She celebrated a birthday—gearing up for “The Big One” sooner than she likes to be reminded—last Sunday. We just HAD to remind her!

Born: Jack and Roxanne Barker are the parents of a brand-new baby. Jack is with EnTech, the firm that operates the water systems of Black Hawk and Central City.

Born: Greg and Georgina Schwartz are new parents again. It’s a boy—their fourth. They have a daughter, as well.

Across the Crossroads, by A.F. Mayham: These late days in the fall smack of renewed ambition brought on by the change in temperature and a wondering what became of your summer wages. Some of the loose change went down the throats and some just went. Old woodsheds used to get real cold when they were the fashion along with red toed leather boots. An erring son sometimes knew the route to the woodshed in the dark, having been there frequently, but not for wood, rather for his own good. A boy who was being corrected by his sire with the paddle applied to that part of his anatomy corresponding to Dory Hill said, “Pop, save a place on which to sit down.”

Mr. George Haagenstad underwent surgery at Rose Memorial Hospital last week, and his many friends in Central City hope for a speedy convalescence.

Sheriff Tom Collins arrested three young men, namely Stanley C. Green, John A. Webb, and David L. Havens, all of Denver, Wednesday night at Black Hawk. Apparently, they had imbibed in too much “mountain dew” and were causing quite a disturbance in front of Turner’s Trading Post. He placed them in his car and Havens, becoming more obstreperous, jerked the wires leading to the two-way communication system, making it impossible to call the Patrol. However, Collins had previously called the Patrol, and they in turn, not receiving a verification, Patrolman Clark of Idaho Springs came over. The young men were lodged in the county bastille, and at a  hearing Monday before Judge Sterling Gilbert of the County Court, Green and Webb plead guilty to the charges of disturbance, resisting arrest, and damaging county property, and were fined $10 and costs, which they paid. Havens, however, decided that he be given a trial and secured counsel, and a trial was set for Friday at the County Court.

Born: A baby daughter, weighing 9 pounds, was born to Mr. and Mrs. Wm. Salzwedell, of Daly City, California, on Monday. The grandparents, Mr. and Mrs. Carl Skagerberg, were with their daughter at the time.

Clay Raymond Sawyer, Julius Kraft, and Frank Pellssier were found guilty of robbery of the Central City, Colorado, post office, September 5, by a jury in federal district court in Denver, Tuesday. The verdict was returned by the jury after 10 minutes deliberation. Immediately afterward, Federal District Judge J. Foster Symes sentenced each of the three to six years in a federal penitentiary, and fined each $500. Kraft and Sawyer admitted their part in the robbery from the witness stand, but denied they had been helped by Pellssier. They stated that they sold him the Central City post office money order forms, which were found on his person at the time of the arrest.

Died: Richard H. Davis, a resident of Colorado fifty-nine years, died at his home on East Colfax Avenue, Thursday, from an illness of six weeks. Mr. Davis was born in Central City, the son of the one of the first settlers of the mountain town. He was engaged in mining until a few years ago when he retired. He had lived in Denver twenty-two years. He is survived by his widow, Mrs. Kate Davis; two sons, Earl and Fred Davis; two daughters Mrs. Lillie Cornish and Mrs. Iola Waldron of Denver, and two step-daughters, Mrs. A.E. Haynie, Aurora, and Mrs. Herbert Bevey, Library, Pennsylvania. –Denver Post

A splendid strike of good ore was made during the week in the West Calhoun Mine in Leavenworth Gulch by the Gold Mining Investment Company, who have been operating the property since last summer The shaft has been overhauled and newly timbered, and the bottom shows a crevice of yellow copper, iron and lead, assays from which show as high as 42 ounces gold, 80 ounces silver, and 18 percent copper, a total valuation of $971 per ton, and manager J.F. Tully is greatly pleased at the prospects that are sure to follow.

Sinking is to be resumed during the coming week at the National Mine, on the east slope of Quartz Hill, when a contract for another 100 feet is to be let. The shaft is now down 500 feet, and the property is being worked by Henry P. Lowe, who is associated with eastern parties in a lease and bond proposition. Mr. Sherman Harris is Mine Superintendent.

Married: In Russell Gulch, at the residence of the bride’s parents, Mr. and Mrs. Charles Phillips, November 21st, 1900, Mr. Thomas Roberts and Miss Lizzie Leverton, both of Russell Gulch.

Kimber & Buffington were putting in eight more stamps in their Polar Star Mill in Black Hawk, making 32 in all. The price charged for treating ore in 1868 was $35 to $40 per cord, and since that time and up to the present, was $30 to $35 per cord.

Mr. H.P. Cowenhoven, of Black Hawk, was offering coal oil by the pint or barrel, cheap to his many customers.

Thomas Pollock had a notice in the Register to the effect that, “The man who borrowed his overcoat about three months ago, was requested to bring it back or come and get the cape that goes with it, as the latter is of no use to him without the coat.”

Mr. W.H. Tappan, who had been east on business matters, returned to Central on Monday afternoon’s stage.

Work on the Quartz Hill tunnel, which has been driven into the mountain 545 feet, had cost $26,000 up to date, with no returns to meet any of the expenses.

Mr. and Mrs. Edwards, of the late Edwards House, Fall River, had left for Council Bluffs, Iowa, where they will make their future home.

Mr. C. H. Sweetser was advertising a big supply of buffalo meat, having been received in his market.

Alexander Rittmaster & Pelton had opened up a dry goods store in Black Hawk.

Died: William Ledford, an employee at the Hill smelter in Black Hawk, died on Wednesday last.

Died: As the result of difficulties between the parties working the Prize and Senderberg properties, in the Nevadaville section of the county, Thomas Gleason, the captain of the Scudder parties, was shot by Thomas Shannon, and died Tuesday from his injuries. Shannon was placed in the county jail. Gleason was 28 years of age, and resided in Nevadaville.

END_OF_DOCUMENT_TOKEN_TO_BE_REPLACED

Benefitting the county, schools, and much more By Don Ireland   This year marks the 30th anniversary of casinos opening in the former little mining towns of Black Hawk, Central City and Cripple Creek, Colorado. In those early years, smoking was allowed inside ... END_OF_DOCUMENT_TOKEN_TO_BE_REPLACED