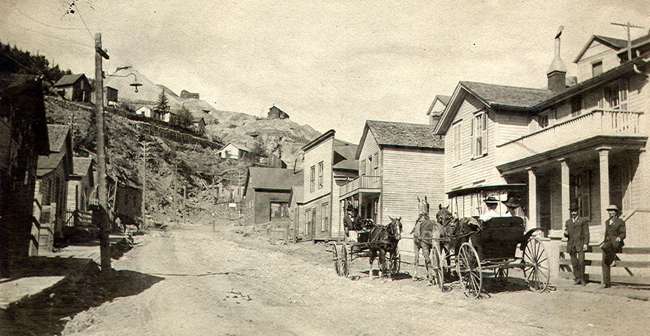 Caroline Loughbridge, who recently completed pharmacy technician training at the Concorde Career Institute in Denver, was featured in C-Notes, the school’s newsletter. The article relates Caroline’s move to Black Hawk five years ago, following a bitter divorce, and her eventual move to the Gilpin Hotel. It goes on to relate how Caroline and others lost everything when the hotel burned last December, and how people in the community have helped Caroline pull her life back together. If you see her in town, ask if she’s got a copy of the newsletter. It’s a nice story and mentions a few folks you probably know.

Judge Frederick B. Rodgers has received the endorsement of the state’s Judicial Performance Commission. The commission recommends that Rodgers be retained in his post as County Judge for Gilpin County, based on a survey of attorneys, jurors, law enforcement personnel, probation officers, and social services workers, who overwhelmingly favor his retention. Although a few said that Rodgers is, at times, stern and intimidating, he received high praise for being articulate, fair to all parties, and having extensive knowledge of the law. He conducts an organized and efficient courtroom, according to the commission, and has a very broad range of judicial experiences.

The big topic in Black Hawk this week is asphalt, taking people’s minds off “gambling fever” for a few days at least. The city is in the process of paving the town’s streets, and Asphalt Paving Co. workers laid a coat of the blacktop on High Street to start. The project is creating quite a stir, as citizens stop to watch, exchanging excited comments. Well, it’s the first time in the town’s 100-year-plus history that these dirt streets have been paved, after all! Paving at the city’s Stroehle parking lot at the corner of Gregory and Main was completed Wednesday. They’ve already started on Church Street, and the project should be completed in the next couple of weeks.

Across the Crossroads, by A.F. Mayham: Political indigestion seems to have invaded the constitution of both presidential candidates, Kennedy having a more severe attack. Bringing up utterly non-essential items like Quemoy and the Cuban situation to confuse the voter were two of the most inane ideas that could be concocted. Situations change overnight and what either candidate may think today is passé tomorrow. One or the other, to show good judgement, should have the subjects declared out of bounds. It’s too late now – the damage has been done. The TV debates have turned out to be a laughingstock among businessmen and are not true debates, but pointless and confusing rambles. The men who asked the questions also need a little brain washing. When queried about the gold situation, both candidates circumvented the meat of the question and tied it up with European and American economy, the soundness of the dollar, which by the way has been devalued already by strikes and inflation, subjects which the average person knows little and cares less. In sizing up the unfortunate debacles of TV debates it must be admitted that for knowledge, vocabulary, and executive experience, Nixon has the goods. While Kennedy means well, his arguments lack the insignia of judgement based on experience rather than theory and political promises.

Mrs. Frank Daugherty and Mrs. R.L. Laird attended a luncheon for the wives of the Shriners in Denver on Saturday.

Married: David Paul Calabrese and Bonnie Gail Skrocki were united in the bonds of Holy matrimony on Saturday, October 28th, 1960. The ceremony took place before the altar in St. Thomas Aquiline Chapel, at the University of Colorado in Boulder. Father Charles Forsyth, O.S. B. Newman Club Chaplain, and long-time friend of Ralph Calabrese performed the service. Mr. William Ralph Calabrese, brother, and Miss Patricia Ann Calabrese were witnesses and attendants to the couple.

Born: In St. Luke’s Hospital in Denver, October 22nd, 1960, to the wife of Mr. Manual Gulidervez, of Lakewood, a daughter.

On Wednesday night, someone threw a rock against the large plate glass window in front of the post office building, shattering the glass so badly that it will no doubt have to be replaced. A rock was found on the sidewalk below where the break occurred, which was probably the one that did the damage. The window broken is the same one that replaced the one broken a number of months ago, when a fight occurred and one of the contestants was knocked through the glass. An investigation is being made by the insurance company to find out who the guilty party is, as the expense of a new glass and placing the same will amount to several hundred dollars.

Mr. and Mrs. Arthur Gray returned from their wedding trip on Monday evening and were given a grand charivari by the young people. On Tuesday evening members of the Woodcraft lodge and friends called on them and spent a very pleasant evening.

The Chain O’ Mines Company in Central shipped a carload of high-grade concentrates from their mill during the week to a smelter at Leadville for treatment.

Several novel election bets were made in Black Hawk during the week, one of which was made by Thomas Beattie and George Vogel, the former favoring McKinley for president and the latter, Bryan. The loser is to wheel the winner in a wheelbarrow from the post office to the depot.

Sheriff Thomas Cody and J.H. Nankervis, of Nevadaville, left on Frida last for Middle Park to locate Shamus O’Brien, who walked out of jail in this city a week ago last Monday, through the carelessness of the jailer, in not locking the door of the cage. They found the young man and brought him to Central.

Frank Mayhew of Nevadaville, had purchased the Eclipse livery stables in this city, and took possession Thursday morning.

At the Old Town Mine in Graham Gulch, sinking operations are being carried on with three shifts, with the intention of continuing the shaft 400-feet deeper during the winter months. A drift is being extended at a depth of 200 feet, and an upraise (lift) is being made for surface connection.

While Harry Foster was dumping a car at the 300-foot station at the Cook Mine on Tuesday night, the car got away from him and he fell with it into a gunny, a distance of 40 feet. His injuries consist of cuts and bruises, but no bones broken.

Born: In Central City, October 26th, 1900, to the wife of Dominick Mattivi, a daughter.

Mrs. J.B. Tomlinson of Chase Gulch advertised for sale or lease on good terms, 130 feet from the Kent County lode in Nevada District.

Correspondence from Georgetown showed that the average yield of all classes of ore treated in Clear Creek County for 10 months, ending October 27th, 1870, was $123.10 per ton, in coin value.

William McLaughlin of Black Hawk had just returned from the east accompanied by his bride.

Mr. E.K. Baxter arrived on the stage Saturday evening from a visit to the states.

William Whitcomb was working the No. 10 claim on the Kansas Mine, and a seven-cord lot treated in the stamp mill gave a gold retort weighing 93 ounces.

William Stalker’s claim on the California Mine on Quartz Hill, was yielding 10 ounces gold to the cord and was 615 feet deep. It was the second deepest shaft in Colorado, the pump shaft on the Ophir-Burroughs property being 630 feet deep.

Rev. Antonio Arright, a converted Italian, who served as drummer boy under Garibaldi, preached at the M.E. Church on Sunday, and delivered a fine sermon.

W.L. Sumner arrived from Middle Park the first of the week and reported six inches of snow on the main range. He said he met a number of Arapahoe Indians near the hot springs.

Ore from the Stonewall section of Devil’s Grip Mine on Bobtail Hill, was returning 16 ounces gold to the cord at the Kimber stamp mill.

Professor N.P. Hill, manager of the Boston & Colorado smelter at Black Hawk, accompanied by his family, returned from the east by coach on Wednesday.

END_OF_DOCUMENT_TOKEN_TO_BE_REPLACED

Benefitting the county, schools, and much more By Don Ireland   This year marks the 30th anniversary of casinos opening in the former little mining towns of Black Hawk, Central City and Cripple Creek, Colorado. In those early years, smoking was allowed inside ... END_OF_DOCUMENT_TOKEN_TO_BE_REPLACED