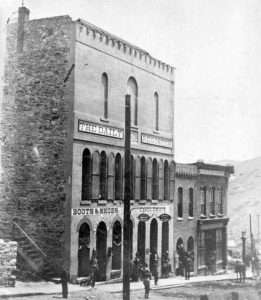 Chief Gene Hofferber of the Colorado Sierra Fire Department recently showed off the department’s new tanker truck. The 1981 Ford is a diesel-powered F-700 with four-wheel drive and a 1,200-gallon water capacity. It replaces a 38-year-old vehicle, and will make extra water available at fires a lot faster than the old truck. “You could walk to a fire jest about as fast as that old truck would get you there,” Hofferber said on Tuesday. The truck purchase is part of Colorado Sierra’s districtwide improvement project. The district is seeking a tax increase for the next four years to pay for the truck. It will be the topic of a meeting on Sunday, October 21st, at 7 p.m., at the fire station.

Across the Crossroads, by A.F. Mayham: Gold and giggle water seem to be two indispensable commodities. Each is talked about a great deal, but like the weather, nobody does anything about either except gab. Gold, of course, came first, but now it is last. Giggle water hasn’t as yet been taken from the people by the government, but other governments have a lien on the gold in this country so that we don’t have any except what’s in the ground. The government, years ago, took gold away from the people and now are up against the same act perpetrated by others. What commercial gold available outside of jewelers stock is being used, refined, for nuclear purposes as it withstands heat of 2,000 degrees. Jewelers buy gold at 1934 prices and sell it converted into trinkets for 1960 prices.

The Register-Call comes out this week with an entirely new face. We do not mean, however, that Ye Editor has changed his physiognomy, but rather that the type has been changed after forty years of duty. The comparison is very little, but it makes better reading, devoid of hair lines, mashed letters, etc., and we hope it merits your approval.

Mr. and Mrs. Carl Skagerberg, after a business and pleasure visit of five weeks in Chicago and vicinity, returned the first of the week. They report a very pleasant vacation. During their absence, the Grubstake Inn has been under the capable management of Mrs. Sells.

A half-dozen dogs are apparently holding some kind of a canine convention each morning on Main Street. Don’t know the trend of bow-wow conversation, nor what they are talking about, but do know that many of the businessmen and residents are talking about, and their talk is full of descriptive adjectives which cannot be printed. Isn’t there some kind of an Ordinance in the City Charter regarding animals being a nuisance and allowed to roam at large without a license?

Died: The people of Gilpin County were saddened this week when learning of the sudden death of Mary Irene Logan, 5 years old, of Rollinsville, who died in Children’s Hospital. She has been in ill health for the past year and death came quickly to her last Friday. She was born in Rollinsville and is survived by her parents, Mr. and Mrs. J. Logan; a brother, Timothy, and was the granddaughter of Mr. and Mrs. John V. Cotter and Mrs. Martha Logan, all of Rollinsville. Funeral services were held Tuesday morning from the Catholic Church, of this city, with interment in Mt. Olivet cemetery near Denver. Deepest sympathy is extended to the bereaved relatives in their hour of sorrow.

Mr. and Mrs. Louis Dikes and children motored up from Denver Saturday evening, to spend Sunday with her parents, Mr. and Mrs. Robert C. Johnson.

On Tuesday afternoon about 2 o’clock, several large rocks became loosened in the workings of the Chain O’ Mines Company, on Quartz Hill, which was a warning to the men below to look out for themselves, and the good work and careful management of William Anfang, resulted in all the men who were working in that portion of the mine getting out safely, for in another hour, the entire top of the mountain caved in, and some, if not all, of them would have been covered up with thousands of tons of rock. Mr. W.S. Parfet, the mine foreman, said that one rock which came down intact measured 73 feet in length, 35 feet in height, and 35 feet across, and by careful calculation it was estimated to weigh 4,000 tons.

Married: In Black Hawk, at the residence of Mr. and Mrs. Otto M. Blake, October 19th, 1930, Rev. Lawrence Edwards officiating, Mr. Arthur Gray, Jr., and Miss Hazel Tabb. The ceremony was witnessed by a few invited friends, after which those present sat down to a wedding dinner prepared by Mrs. Blake. The young lady is well known in Black Hawk, having been treasurer of the City of Black Hawk for four years, and also is employed by Bozargo & Company as their bookkeeper. The groom has been a resident of the city for many years, and is engaged in mining. The couple has a host of friends in this city and county who extend greetings and good wishes for a long and happy future. They left for Longmont, Colorado, on a short visit with Mr. Gray’s relatives, and on their return will make Black Hawk their future home.

How to Make Squab Plate Dinner, by Nellie Maxwell: Roast unstuffed but well buttered inside and out, three or four squabs. Glaze the breasts with a pan gravy. Make eight potato balls and four carrot balls for each squab. Take six small onions the size of the potato balls and cook he vegetables separately in a very little water. If small onions are not to be obtained, take the hearts of larger ones. The remainder of the onion may be used for some other dish. Make a stuffing of bread crumbs, one egg yolk, a tablespoonful of melted butter, a teaspoonful of chopped parsley, and a little thyme. Roll this forcemeat into small balls the same size as the vegetables and brown them in a little butter. Serve on a hot platter, the squab in the center with the balls around it. Pour the juices of the roast squab over the whole.

Mr. Shamus O’Brien walked out of the county jail on Monday evening, about 6:30 o’clock, and made good his escape. He was in for horse stealing.

Mitch Griffith and George Godfrey had established a hack line, to carry passengers and express packages between this city and Idaho Springs, making round trips daily.

Another shift was added to the force on the Cook Mine, and the working force now numbers 140 men.

Operations have again been suspended on the Topeka Mine, in Russell District, when the working force was laid off, and no work is being done except to hold the water.

Messrs. Jerome B. Chaffee and Dave Moffat came up on the coach from Denver on Saturday.

The Colorado Central Railroad Company was asking for proposals for grading a railroad between Ralston and Greeley.

Dixon L. Southworth was working the Stewart Mine, in the Russell Gulch District.

A party of Missouri and Kansas editors were spending a few days in the various mining camps.

Professor J. Alden Smith, who had been looking after the mineral display of the county at the state fair in St. Louis, returned home on Wednesday.

The annual renting of the pews in the Congregational Church, in this city, took place on Thursday evening, and the pews were rented for a total of $1,325.

END_OF_DOCUMENT_TOKEN_TO_BE_REPLACED

Benefitting the county, schools, and much more By Don Ireland   This year marks the 30th anniversary of casinos opening in the former little mining towns of Black Hawk, Central City and Cripple Creek, Colorado. In those early years, smoking was allowed inside ... END_OF_DOCUMENT_TOKEN_TO_BE_REPLACED