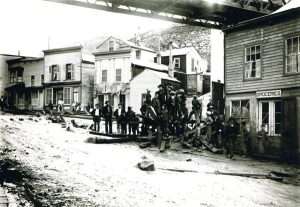 To Gilpin County—north, south, east—residents and business people, you all are cordially invited to attend the Gilpin County Mixer, sponsored by the Chamber of Commerce, on October 15th, at the Teller House in Central City, beginning at 5 p.m., and going until late! Mixer begins at 5 p.m., when the House’s full fall menu will be specially priced at only $3 a dinner. Special happy hour drink prices will be available during dinner, and soft drinks will be available for free. Dinner ends at 9 pm., but that’s the hour when the Teller House will offer free beer and wine for the rest of the evening. A $2 donation at the door will fund future Chamber community events. And when will you ever get another chance to enjoy the fabulous food at the Teller House for a measly three bucks!

You wouldn’t think that, in a county of 4,000 citizens you’d keep running into people who share a name with someone else. It seems to happen in Gilpin County every time there’s an issue or election, though, and this year’s no different. Mark E. Dunn has lived for 20 years near the corner of Highways 119 and 46. He recently wrote a letter to the editor of the local paper, and has asked questions at two recent meetings on gambling. He is NOT, however, the same Mark Dunn who has been on the radio speaking on gambling, and would like it known that he is not associated with any group holding a position—either pro or con—on the gambling issue.

Across the Crossroads, by A.F. Mayham: As the crucial day, November 8, draws nearer, the presidential candidates seem to be more nervous. Nixon at present as a little edge on Kennedy, but it is close. Kennedy’s talks appear to be on the socialistic tenor and that is what Khruschev likes. Then Eleanor entertained the Red Leader and part of his gang, supposedly in honor of FDR, who first recognized Uncle Joe and red Russia and handed over part of Berlin and a 100-mile access road to the instigators of world unrest. Kennedy, while a nice looking fellow, has been dubbed as a political radical. And the question has been put, “Where is the money coming from to finance all the new frontier propositions he advocates?” There’s only one source—the people’s pocketbook. Some make an issue of the minimum wage legislation of $1.25 an hour without thinking of who is going to pay for it. Of course it will be added to the cost of living for everyone and some folks can’t earn $1.25, which is if they give value received. If they are worth more in earning power the employer is usually cooperative. The administration has about as much to do with general conditions as the Man in the Moon. A rabbit occupying the presidential chair would be under the same criticism. Congress is the ruling factor under our form of government and that brings up the Allot-Knous U.S. Senator contest which, according to the Snowshoe rabbit, will probably be close, similar to the paper on the wall… In other news, one way to keep your teenaged daughter out of hot water is to put dirty dishes into it. And Uncle Ed knows a woman who shot her husband just for fun—the fun he was having with other women.

Mrs. George Springer entered Porter Hospital, Monday, and the following day was operated for a condition she has suffered from for the past year. At present, she is resting comfortably, which is good news to her many friends, and it is hoped her duration in the hospital will be but a few days.

On their way to Denver Saturday morning, the car driven by Vern Terping, of this city, collided with a pole near the Bobtail Tunnel, causing injury to Mrs. Terping and considerable damage to the car. The road was slippery at this point, due to falling snow, and when the brakes were applied, the car skidded, slamming into the pole, which was cracked in two. Mrs. Terping was taken to one of the hospitals in Denver by Dr. Fowler of Idaho Springs, and was found to have a slight concussion to her head, as well as suffering from shock. Latest reports are that she is convalescing nicely.

Married: The Mayor of Central City, George Ramstetter, was united in marriage to Mrs. Ruth Kimball, of Denver, at a ceremony at the Ascension Lutheran Church at Littleton, Colorado, October 15th. The bride is a night supervisor of the Denver Orphan’s Home Association, and the groom has been a life-long resident of Central City, and now serving his second term as Mayor of Central City. A reception is planned for Sunday evening at the Elk’s Hall, to which everyone is invited. We extend congratulations to the newly-married couple and wish for them a most happy and prosperous married life.

The big mill of the Chain O’ Mines Company has been out of commission for several days during the week on account of the cable on the tramway breaking.

James V. Thompson, a former mayor and long resident of Black Hawk, was a visitor to this city on Thursday of last week, shaking hands with old timer friends and neighbors. He is at present employed by the City of Denver in caring for the city property at Echo Lake, and coming down to Idaho Springs that day, concluded to come over the mountains and make a short visit here.

Dr. R. Slater has been walking around the streets with the aid of a cane for the past few days, and on inquiry of the reason of the same, he said he had been run over by his own auto, but fortunately escaped without broken bones. He said he was under the car making some repairs, when the machine took a notion that it was time to be going, and it went forthwith, one of the wheels passing over his right leg below the knee.

Beautiful weather was had during the entire week, equal to almost any portion of the summer months, with butterflies, blue birds, chipmunks and other specimens of that character, sunning themselves and enjoying the bright sunshine.

Born: In Golden October 4th, 1930, to the wife of John Doran, a son. The above announcement will clear up the reason why Mr. Doran has been stepping so high lately and wearing a smile that covered the whole of his anatomy.

Died: In Central City, October 12th, 1930, Mrs. Elizabeth Jane Warren, of heart disease, aged 69 years. Deceased was born in Cornwall, England, and had been a resident of Gilpin County for 57 years, a portion of those years being a resident of Nevadaville, where her husband died many years ago. Of late years she has resided in this city with her son Frank. She is survived by two sons, Frank, of this city, and William, of Denver; and a sister, Susie Lungburg, of Los Angeles. Funeral services were held at the M.E. Church, in this city Thursday afternoon, with interment in the Bald Mountain Cemetery.

Mr. Elijah Stevens, who had been visiting his family in Denver for the past couple of weeks, returned to Central the first of the week.

Mrs. I. Johns and children went to Denver on Tuesday, on a visit with her mother, Mrs. Thomas Champton.

The main shaft on the O’Neil property on Gregory Hill was being sunk with three shifts of miners, and the ore that is coming from the shaft is being stored for future shipments. A force of over fifty men are employed at the present time in all parts of the property.

Will Hoskin has taken a position as blacksmith at the Pocahontas and Topeka Mines.

Died: Mrs. Olive Stark died at the county hospital in Denver on Saturday from the effect of a dose of morphine, taken with suicidal intent, caused by despondency. Mrs. Stark was born in this city and was the daughter of S.I. Lorah, from whose residence the funeral took place on Monday last. Her death recalls to mind the death of her brother, Bela I. Lorah, who was killed in the explosion and fire at the Gumry Hotel in Denver in 1895.

Died: Joseph Welch and E.A. Stueve lost their lives in a fire in the Colorado House in Black Hawk, early Tuesday morning, both being suffocated by smoke. The fire occurred at 1 o’clock in the morning and was discovered by Messrs. Eatwell and Murray, who were returning from a meeting of the Redmen of Nevadaville. Mr. Welch was about 60 years of age, and was the owner of the Joe Welch placer claim on North Clear Creek below Smith Hill. E.A. Stueve was an Austrian by birth, and lived on a ranch on Ralston Creek, next to August Bloom. He was about 70 years of age and a single man, and had relatives living in this city and in Golden. The building was owned by Mrs. P.J. Murphy, who estimates her loss from $1,500 to $2,000 without a penny of insurance on the building or furniture.

John Scudder, who was operating the Rhoderick Dhu Mine on Bobtail Hill, reported that the mine was furnishing enough ore to keep 48 stamps dropping, which was returning 8 ounces gold to the cord, and that the Prize Mine was keeping the same number of stamps in operation, and returning 4 ounces gold to the cord, with smelting ore netting $50 per ton.

The report of the First National Bank of Denver, published in these columns, showed deposits of $1,074,000, the individual deposits being over one million dollars. D.H. Moffat was cashier, with Jerome B. Chaffee, G.W. Clayton and George B. Wells as directors.

The new Jarvis Hall at Golden, was dedicated during the week.

Died: Mrs. Louis Mack died in this city on October 15th, 1870, and the remains were to be shipped out for interment.

END_OF_DOCUMENT_TOKEN_TO_BE_REPLACED

Where the dead get to tell their story By Jaclyn Schrock On Saturday, August 21, the Gilpin Historical Society held their annual Cemetery Crawl. Tickets allowed the shuttle of hundreds of guests from the Teller House parking lot to the Cemetery. Depending on v... END_OF_DOCUMENT_TOKEN_TO_BE_REPLACED