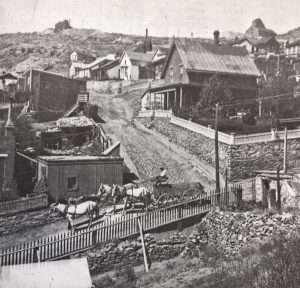 Having no idea that the driver of a vehicle believed to be stolen in Nederland would try to ram their patrol car, Sgt. Jon Bayne and Deputy J.D. Yocom readily responded to a request for assistance from the Nederland Marshal’s Office. On September 20, the Gilpin Sheriff’s Office received a report that a man was headed through Gilpin County after allegedly snatching a truck in Nederland. Bayne and Yocom spotted the truck on Hwy. 119 at mile marker 12 at the same time the driver spotted them and tried to ram the police car head-on. A quick U-turn had Bayne and Yocom in pursuit, heading south at speeds of up to 80 miles an hour on the winding highway that was designed for much slower speeds. The driver of the truck, Stephen Reep, 24, was stopped at mile marker 3.5 after he ran into the back of a State Patrol Car. Undersheriff Bruce Hartman, who also pursued the fleeing suspect, reported driving side by side with the truck trying to gain an advantage on the driver so he could cut him off. At one point the two vehicles were so close, said Hartman, that he could see the man grinning. Hartman’s attempts proved futile, and Reep allegedly tried to force the patrol car into the mountainside. Charges are pending against Reep, and may include felony eluding theft, reckless endangerment, and assault. Reep was taken to jail in Nederland. Damage to the State Patrol car is estimated at $700.

Died: Annie Davey Quiller, lifelong resident of Gilpin County, died at the Christopher House in Wheat Ridge on Thursday. Born in Nevadaville on October 4, 1897, she was 93 when she died. Services will be held Monday, October 1, at St. Paul’s Episcopal Church in Central City. Reverend Irene Sullivan will officiate, and a graveside service will follow at Bald Mountain Cemetery. The staff of the Register-Call and people throughout the community extend their deepest sympathies to Marge Quiller, Annie’s daughter.

Across the Crossroads, by A.F, Mayham: The deposit of a reported 3 percent iron ore near Salida has attracted some attention from engineers looking for iron. One of Clear Creek’s larger mining companies is reported as interested and has acquired a considerable plot of promising land for development. There is always a market for iron in industry and unlike gold isn’t finagled with by the government and money changers, but is subject to the supply and demand of industry. Our gold situation seems to have developed over the years from mismanagement and unsound judgement and now our commitments in gold are more than we can pay while gold mines remain idle. The money changers instead of the people or the law of supply and demand control the price of gold and so far our Congress, whom we elect every so often, haven’t the guts to remedy a situation that is over 20 years old and outdated.

Dr. T. McDivitt, District Superintendent of Methodist Churches of Denver, will preside at a Quarterly Conference this coming Sunday at the local church at 3:00 o’clock p.m. All members and friends are urged to be present.

Died: Funeral services were held last Saturday in Denver for Wm. E. Warren, aged 55 years. He was born in Central City, attended the schools here, and moved with his family to Denver in 1918. He is survived by his wife, a son, Melvin of California, and a sister, Mrs. Marguerite Stevens of Denver.

Died: Mrs. Edla Ahman died Saturday in a convalescent home at Morrison, CO at the age of 76 years. She was the wife of the late Dan Ahman and has been a resident of Central City for many years past, residing on Eureka Street. She is survived by a sister and brother in Finland.

The first game of the world’s series in baseball was played in Philadelphia on Wednesday last between the Athletics of Philadelphia and Cardinal club of St. Louis, and was won by the former by a score of 5 to 2. The second game was played yesterday afternoon, but was not finished until after we went to press. The next three games will be played in St. Louis, on Saturday, Sunday, and Monday.

We were recipients of a pleasant call on Sunday from George Gilchrist of Denver, who was accompanied by his sister, Miss Annie Gilchrist and Miss Lillie Anderson, who were making a trip through this section and enjoying the beautiful fall covering on the mountain tops.

Messrs. Fred and J.L. Pinkus were over from Rollinsville on Tuesday attending to business matters and visiting with friends.

Married: In Boulder, September 25th, 1930, Judge Coover officiating, Joseph Heppberger, of Black Hawk and Miss Dorothy Cordell, of Boulder. The many friends of the contracting couple in Gilpin County wish them a long, happy, and pleasant future.

Died: Mr. Samuel Newhouse, one of the greatest pioneer mining men of Colorado, died in France, a week ago, at the age of 77 years. He made millions in mining operations in Leadville, in Utah, and Idaho. In 1888, while in Denver, he conceived the idea of draining the entire mining district from Idaho Springs to Central City with a five-mile tunnel, which was given his name, but which is now called the Argo Tunnel. After this tunnel was completed he went to Utah, where he became interested in several mining operations, which netted him millions of dollars, a good portion of which was harvested in real estate and buildings in Salt Lake City, which will stand for all time to come as a monument to his name and accomplishments.

Dr. Abe Ashbaugh is running his mill day and night on ore from his Lombard property at Yankee Hill, which is turning out good values.

A station pump has been placed in the Coeur d’Alene Mine on Academy Hill at the 400 foot level and a sinking pump has been placed in the bottom level, which has handled the water the mine makes in good shape, and the work of sinking the main shaft another 100 feet, has commenced with day and night shifts. This property is being operated by the Rapidan M. and M. Company.

Sinking the main shaft has been completed at the Pittsburg-Meeker Mine, the shaft now being 425 feet deep. Drifts have been started on both sides of the shaft at a depth of 400 feet and regular shipments to the mills will be maintained.

Charles A.H. Rice came into Central Saturday from Middle Park, and reported that he and several others had a fight the previous Monday with a band of about 80 Arapahoe Indians.

At the Territorial Fair, Gilpin County was well represented with specimens of gold, silver, and copper ores, and the following premiums were awarded: The Hattie Jane Lode in Lake District, for the largest and best collection of gold ore from the surface to the bottom of the shaft. The first premium for the largest and best collection of ore from one county was taken by the Consolidated Gregory property of this county. The First National Bank’s $40,000 gold bar took the first gold bullion premium as well as the first for the best display of placer gold, from North Clear Creek. For native silver ore, the Coaley Mine took the first premium. The Kip and Buell property took the first premium, and the Prize Mine the second, on copper ores carrying the largest percentage of that metal.

Mr. R.W. Raymond, editor of the Engineering and Mining Journal of New York, and the United States commissioner for the collection of mining statistics, was making an examination of the mines of the county and made this office a pleasant call.

The Nevadaville public schools had an average attendance of 80, who were all in one room, and were taught by Charley Harker, principal, with Miss Mary Randolph as assistant.

Ben W. Wisebart, who had been east purchasing goods for his store, returned to Central during the week.

Joe Hepburn, of Mountain City, lost all the fingers of one hand, by the explosion of his gun, while attempting to shoot an eagle.

END_OF_DOCUMENT_TOKEN_TO_BE_REPLACED

Benefitting the county, schools, and much more By Don Ireland   This year marks the 30th anniversary of casinos opening in the former little mining towns of Black Hawk, Central City and Cripple Creek, Colorado. In those early years, smoking was allowed inside ... END_OF_DOCUMENT_TOKEN_TO_BE_REPLACED