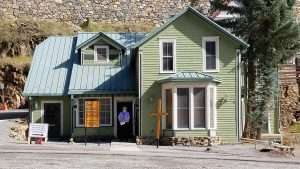 Red Rocks Community College will again hold classes in Gilpin County this fall, in a continuation of its Mountain Area Community Education Program. This semester’s offerings include Grant Writing for Non-Profit Organizations, and Marketing for a Small Business. Both classes will be held in Central City. Whatever organization you’re involved with, it’s probably always looking for ways to fund its work. Join grant specialist Dr. Louise Keller, who will teach you the tricks of the trade in terms of writing successful grant proposals in both the public and private sectors. Two three-hour workshops will teach the process of writing a grant proposal and mistakes you can avoid. Every non-profit organization should send at least one representative to this class. The grant writing class will meet Saturday, Oct. 6 and 13, from 9 a.m. to noon, at the Clark Annex. The fee is $40. Also on the schedule is small business marketing. What works for the big guys in business often doesn’t apply for owners of small businesses. Let Cindy Churchill introduce you to some wonderful, low-cost techniques she’s used herself to promote the three successful businesses she has operated. You’ll come away with ideas, handouts, and some things to try that really work. Marketing will meet Wednesday, Oct. 17, from 5-9 p.m., at the Clark Annex. Tuition is $20. Please sign up as soon as possible so that Red Rocks can determine if there are enough students to conduct the class.

Across the Crossroads, by A.F. Mayham: The stock market hit the triple bottom last Monday and caused some stockholders a little concern, being the lowest for the year. Khrushchev also hit an old, dilapidated dock in the east river, greeted by boos and catcalls, rain and security police. The State Department had asked newspapers and press associations not to display the old cuss’s activities, but sensational papers need to have something to fill up the space if nothing but a lot of empty words and repetitions. Of course, if he or Castro makes a left turn from the wrong lane, they would be careless and could qualify for what the man in the car behind called them. Maybe they could anyway.

Wm. Russell Jr. and mother returned the first of the week from a three week’s business and pleasure trip in California and Arizona.

What might have been a very disastrous fire occurred Sunday afternoon at the Grubstake Inn, when grease which had collected on the stove and floor burst into flames, necessitating the calling of the fire department, who quickly extinguished the flames with chemicals.

Mrs. Wm. Margerum is at her home here convalescing after surgery at St. Anthony’s Hospital. Her many friends wish her a speedy recovery.

Mr. D.A. Coughlin is able to be about the streets again after a siege of nearly five weeks of suffering from a sort of intermittent typhoid. He had a very high fever for ten days or more. He looks like the breaking up of a hard winter, but expects to go back to his work as station agent for the C&S Railroad the first of the week. Mr. Coughlin has had a record of continuous service for the railroad that is not experienced by many, and his record of service to the public is one marked by courteous treatment and efficiency. —Idaho Springs Journal

Mrs. M. Leahy was up from Denver last week visiting relatives and friends and looking after her property interests.

Attorney J. McD. Livesay was up from Denver during the week attending to legal matters before the district court. Not quite as young as he used to be, he still holds his age remarkably week, and is as handsome as ever.

Died: A letter was received at this office last week from Mrs. Crossley, at Bloomsburg, Pa., announcing the sudden death of Mr. Crossley, on Friday evening last, at the age of 73 years. Deceased came west when he was 17 years of age, and located in Black Hawk, where he remained until 12 years ago, when he returned to Bloomsburg, his old home. For years he was one of the old reliable mill men of Black Hawk, and will be remembered by the many mine operators and leasers in the county, whose ores he put through the old stamp mills. Of a pleasant and agreeable nature, he made many friends in his old mountain home, who will be surprised to hear of his sudden death. He was a member of Central City Lodge, Order of Elks, of this city, and is survived by his wife and one daughter, Fronie; a brother, Samuel, residing in Illinois; and a sister, Mrs. Robert Hartman, of Bloomsburg. The Morning Press, of Bloomsburg, PA., has the following concerning his death: “William L. Crossley, on the Espey Road, almost opposite New Rosemount Cemetery, dropped dead at the front steps of his home shortly before 7 o’clock Friday evening. He had appeared in good health during the day, and had just returned from a nearby farm with a basket of peaches, and was about to enter his home, when he dropped dead.”

Died: Clifford Reseigh, who was born in Nevadaville, and lived there or many years before going to Denver with his parents, died in Denver last week, aged 43 years, and is survived by his wife and three children. He had been employed as a janitor at the Colorado Hospital, and fell off a ladder, fracturing his skull, and died without regaining consciousness.

Mr. Fred Kruse transacted business matters in Denver during the first of the week.

Mrs. A. Mathes and sister, Miss Matilda Schultheis, returned Saturday from a visit with relatives in Denver.

Henry Schultheis is running brakes at the Gold Dirt Mine, in the Perigo section of the county.

Mr. Richards of Black Hawk sent a lot of ordinary looking fire brick to the State Ore sampling company in Black Hawk last week, for assay and settlement. The lot weighed 550 pounds, and he received a check for $340.40 for the same, the lot assaying nearly 70 ounces gold to the ton. These bricks formerly occupied a place in the lining of the assay furnace in Professor Hill’s furnace in Black Hawk, and were highly impregnated with gold, which had been carried off in the fumes. The brick, when roasted, showed plenty of gold forced to the surface. This was one of the most unique shipments ever sent to the sampling works.

Married: In Central City, September 22nd, 1900, by Thomas Hooper, justice of the peace, Henry Baldasini and Miss Lola Hacker, both of this city.

John H. Hence, the jeweler of this city, was showing the gold spike which was to be the last one driven in completion of the railroad from Denver to Golden. The gold came from the mines in Gilpin County, and the spike carried $178 in that metal, and was presented to the Colorado Central Railroad Company by Gilpin County. A silver spike, presented by J.W. Watson, was in Hense’s shop for engraving.

Alexander Cameron, during his summer’s work on Clear Creek below Black Hawk, employed an average of 18 men per day for 973 days, and in that time cleaned up 549 ounces and 16 pennyweights of gold, which sold at from $18.75 to $20.20 per ounce, according to the premium on that metal at the time of sale.

Judge Belford and family arrived from Georgetown on Monday, to locate here, and are occupying Mr. Campbell’s residence on Eureka Street.

END_OF_DOCUMENT_TOKEN_TO_BE_REPLACED

Where the dead get to tell their story By Jaclyn Schrock On Saturday, August 21, the Gilpin Historical Society held their annual Cemetery Crawl. Tickets allowed the shuttle of hundreds of guests from the Teller House parking lot to the Cemetery. Depending on v... END_OF_DOCUMENT_TOKEN_TO_BE_REPLACED

Where the dead get to tell their story By Jaclyn Schrock On Saturday, August 21, the Gilpin Historical Society held their annual Cemetery Crawl. Tickets allowed the shuttle of hundreds of guests from the Teller House parking lot to the Cemetery. Depending on v... END_OF_DOCUMENT_TOKEN_TO_BE_REPLACED