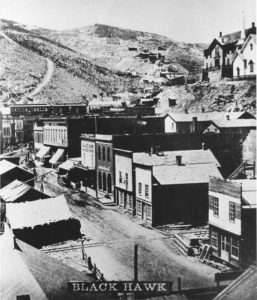 Black Hawk might soon have paved streets if the aldermen give the final okay to a plan to lay asphalt on most of the town’s dirt streets. Although the aldermen want to pave all streets in town, the project—if approved—will need to be undertaken in two phases. The cost of paving Main, Chase, and Richmond streets is greater than the cost to pave all other streets in town. For that reason, the aldermen are inclined to order asphalt on all but those three streets this year, during what they are referring to as Phase I of the paving process. For approximately $37,000 the city can pave Backus, Church, Marchant, Selak, Horn, Dubois, and High Streets, along with the portion of Clear Creek Street that is an extension of Marchant, and the city parking lot at Main Gregory, as well. It would cost an additional $47,000 to pave Main, Chase, and Richmond, so the aldermen want to wait until next year to consider paving these streets. Funding for the project will come from the city’s capital reserves, which now stand at $181,000. This will leave a balance of $145,000 after Phase I costs are paid. Before deciding on the paving, the council intends to consult with the city’s auditor, Jack Salewski, to verify that this will leave the city in stable financial condition.

The City of Central became a historic backdrop for the prestigious Town and Country magazine, which had a photo crew in town last weekend. The crew of seven arrived in a whirl, to the delight of some, the dismay of others. Central City Public Relations Director Pat Wendleton had her hands full coordinating props and locations for the group. The magazine crew spent three days taking photographs for an estimated 12-page color advertising layout promoting children’s western wear. The advertising spread is expected to appear in the January issue of Town and County. Location shots included Eureka Street, complete with stagecoach, Main Street, the Opera House, Historical Society Museum, the train, Gold Coin Saloon, Teller House, and Black Hawk City Park. Don’t be surprised to see several familiar faces, such as Mayor Bruce Schmalz as a bartender, John Ficke as John Gregory, and other faces. Locals who posed for the cameras include Mayor Bruce Schmalz, John Ficke, Lou Baylog, Mike Rickenback, Blair Wellman, and Greg Moates. Although it was hectic, Wendleton is now looking forward to the publicity that the ads will bring the town.

Across the Crossroads, by A.F. Mayham: The more a muddy pool is stirred, the blacker it gets, an old saying that could be applied to the current presidential election. Keeping religion out of the campaign seems similar to closing the spigot to a keg but leaving the bung open. Politically inclined newspapers and the candidates themselves keep bringing it in the open discussions. Some comparisons are made between the various sects such as Baptist, Quaker, Presbyterians, etc., but these sects are not dominated by any one head and enjoy the freedom of their own conscience to seek salvation where it best suits the individual. Some ministers are too long-winded and fail to bring the crux of the talk to a conclusion, where the congregation can absorb the lesson. The good is in the individual, not in the sermon.

Edward Dickie, 63, of Denver, was arrested by Sheriff Tom Collins Monday afternoon in one of the bars in Black Hawk, on complaint of the Denver Police Department, charging Dickie as having wounded Charles Kelly of Denver with a blast from a shotgun. The arrest was made so quietly and efficiently that no one in the room realized what was happening. Dickie was taken to the county jail, and that evening two detectives of the police force in Denver came up and took him down. The victim was shot in both legs and the quarrel was a culmination of a disagreement over business dealings. Latest reports are that Kelly, who was in a critical condition for several hours, will recover.

Mr. W.L. Thomas and wife came up from Denver Sunday, and spent the day with his parents, Mr. and Mrs. J.M. Thomas.

Mr. and Mrs. W.O. Ziege and daughter left for Denver Saturday morning, where Mr. Ziege attended a meeting of the state equalization board.

Dan Cupid aimed for better than old Demon Divorce in Colorado in 1929, and the result made the state twenty-fifth in the Union in number of marriages and twenty-fourth in divorces. Figures coupled by the Department of Commerce at Washington, D.C., showed 13,047 marriages and 2,392 divorces were recorded in Colorado in 1929. This was a ratio of six to one, a proportion maintained by the whole country. Six states are still to be heard from. The other forty-two showed a total of 1,043,208 marriages and 171,789 divorces, indicating an increase of 65,883 marriages over the 1928 total and an increase of 4,724 divorces. High position in number of marriages went to New York, with 121,535. Divorces there totaled 5,161. Delaware had the smallest number of marriages, 1,230, and the divorces totaled 174. The “divorce mill” at Reno, Nevada accounted for the fact that Nevada’s marriages, 5,773, were only twice the number of divorces in that state. Wyoming reported 1,941 marriages and 707 divorces. In the District of Columbia, there were 5,634 marriages and 115 divorces.

Died: Mrs. Hannah Fuller died on Wednesday of last week at St. Luke’s Hospital in Denver, at the age of 96 years. She came to Central City by ox team in 1861 from Fort Wayne, Indiana, on a wedding trip, remaining here a year, when the couple went back to Wilcox, Nebraska, where they took up a homestead. Death was due to the infirmities of old age. She was the grandmother of Claude McKay of this city.

Died: Mrs. Elizabeth Mary Manuel, mother of Mrs. J.D. Richards, of this city, died in a private sanatorium in Denver on Saturday last, at the age of 93 years. She had been a resident of Gilpin County for over 60 years. Funeral services were held on Tuesday last from the Rogers’ Chapel, with interment in Fairmount Cemetery.

Richie Hughes came over from Idaho Springs on Tuesday to make arrangements for starting up the Lillian/ Gold Dollar properties in Russell Gulch.

In the wrestling match in this city on Saturday evening, Louis Morgan threw T.J. Quick three times in 45 minutes and 27 seconds, winning the side bet of $100 and the gate receipts.

Chase Withrow of this city who was nominated by acclamation by the Republican State Convention in Denver last Tuesday, for the office of Attorney General of the state, has written the chairman of the state central committee that he would not accept the nomination.

A good strike has been made in the Running Lode Mine below Black Hawk, which is being operated by Thomas Dunstone for the Gower Mines Syndicate. The find was made in the 7th west level where the pay streak measures from 16 to 18 inches in width, and a sample lot of the whole width of the streak showed an assay of 7.60 ounces gold, 227.40 ounces silver, and 39 percent lead to the ton. In the 700-foot east level a five-inch streak of solid gray copper and lead has been opened up, carrying good values and improving in size as development work continues. Steady shipments of milling ore are being maintained and a battery of 10 stamps at the Gilpin Mill is kept constantly employed, and a lot of 40 tons is being treated at the Rocky Mountain Concentrator.

Born: In Russell Gulch, September 8th, 1900, to the wife of Frank Stansfield, a daughter.

Born: In Nevadaville, September 19th, 1900, to the wife of William Hill, a daughter.

Rev. A. Whittaker, of Jefferson City, Mo., preached at the Presbyterian Church in this city on Sunday.

Mr. Hanington, superintendent of the Consolidated Gregory Company, arrived on Saturday from the east, bringing his family with him.

Mr. F.H. Teats announced that the first nine of the Star baseball club of Central City would meet the Occidental baseball club of Denver on their grounds on September 26, to play a series of games for the championship of Colorado Territory.

Fourteen inches of snow was reported on the mountains in the vicinity of Caribou.

Honorable Jerome B. Chaffee was up from Denver during the week, feeling fine after the election campaign.

END_OF_DOCUMENT_TOKEN_TO_BE_REPLACED

Where the dead get to tell their story By Jaclyn Schrock On Saturday, August 21, the Gilpin Historical Society held their annual Cemetery Crawl. Tickets allowed the shuttle of hundreds of guests from the Teller House parking lot to the Cemetery. Depending on v... END_OF_DOCUMENT_TOKEN_TO_BE_REPLACED