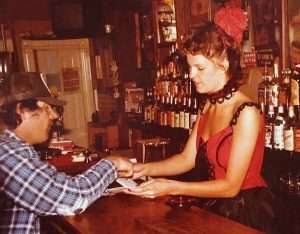 The historic Washington Hall bell tower got its crowning glory as the Delta Dawgs of the U.S. Army Reserve put the final touches on the tower’s cupola. Once the construction work was completed, a new coat of paint was started on the newly renovated structure. The restoration project was organized through the efforts of Gilpin County Arts Association President Linda Hargrave.

“Madames” Eileen Pfeifer and Fay Keller stole the show at the Taste of Colorado in Denver last weekend, stealing the thunder even from Aspen’s slick full-color media handouts. The ladies, decked out in Lou Bunch Day finery, were surrounded by reporters and photographers, while the more typical tourist displays got a lot less publicity than they had expected. Central City’s PR person, Pat Pendleton said the costumed ladies got more publicity for the town than she had imagined possible.

“Anyone tracking mud on my clean carpets will be twisted like a pretzel and thrown to the ground squirrels. This is no threat—it’s a promise!” This notice appeared at Gilpin County School after Tracy Southworth spend the better part of a week cleaning carpets once all the heavy construction at school was completed. Somehow we think she meant ever single word of it, too!

Fran Cooke is all smiles at the prospect of becoming a first-time grandmother. The excited parents-to-be are Kim and Tod Rietz, Fran’s daughter and son-in-law, who live in Niles, MI. Naomi Fellows, who will become a great-grandmother for the third time, is keeping her fingers crossed that she and the new baby will share the same birthday, April 4.

Died: Jeffrey Mark Anderle, 28, was killed in a motorcycle accident in Hesperia, CA, August 2. He leaves behind two children, Amanda and Jacob. Born in Downey, CA, he was the son of George and Lois (Olsen) Anderle. In addition to his children and parents, Jeff is survived by sisters Robin Lund and Tamara Anderle, and his brother Randy Anderle, all of California. He was the grandson of Winnie Anderle and the nephew of Shirley Anderle Clay, May Gladys Thrash, Gene Anderle, Joe Anderle, Fernetta Olsen and Billy Oslen. Services were held August 6 in Hesperia.

Across the Crossroads, by A.F. Mayham: There seems to be a fad of carrying brief cases or portfolios whether there is anything in them or not. In one office the boys thought they would find out something. They put the telephone directory in a man’s case and closed it as usual. The fellow who carried the case had it for three days back and forth. The fourth day at the office he had occasion to use the directory and remarked someone had “lifted” it. The joke was on him all right when they told him it was in his case.

Noticed in the Rocky Mountain News of Tuesday morning an article that “Shiner, a 9-year-old gelding made a quick decision and just took off, presumable to South Dakota.” Further on, the article stated, that “she slipped her rope and bolted northward.” Now we’re in a helluva fix if she or he should wander up this-away, as we could not identify if the animal was a he male or a she male.

The trial between the City of Central and Earl Person, scheduled for last Tuesday morning, has been postponed until January 19, 1961.

Mrs. Lerchy Sorenson enjoyed a surprise visit from her mother and sister from Kansas over the weekend.

A very serious automobile accident happened Sunday evening when two cars from Arapahoe County collided head-on on a curve just below the city limits of Black Hawk on Highway 119. Both cars had five passengers in each one, all of whom were injured, necessitating removal by ambulances to hospitals in Denver. Latest reports are that only one passenger was seriously injured, the others being treated for bruises and shock.

Mr. Paul Meyers of Houston, Texas, arrived here last weekend to join Mrs. Meyers who has spent the summer at their cottage in Apex. After the Labor Day holiday they will return to their home in Houston.

Edwin Gage was taken to Veterans’ Hospital in Denver last Friday. We all wish him a speedy recovery and an early return home.

Emma and Kathryn Eccker and Laura Ress drove to Longmont Sunday to attend the Area B School of Instruction, American Legion Auxiliary.

Mrs. Mary McGaw, of Boston, Massachusetts, who is touring our state for matters of interest of former days for publication in eastern magazines, was a caller at the Register-Call office on Saturday last.

Mrs. Mary Reidl, her mother and brother Gus, came up from Denver Sunday on a short visit with relatives and friends. They were formerly residents of Russell Gulch.

Governor Adams has appointed Mr. W.O. Ziege, county assessor of Gilpin County, as a delegate to represent the State of Colorado at the National Tax conference to be held at Kansas City the week of October 20.

Mr. and Mrs. W.O. Ziege went to Denver the first of the week to meet Mrs. Lillie Matthews, a cousin of Mrs. Ziege, who will visit with relatives in Denver before coming to Central to make them a visit.

Mr. and Mrs. Wilbur Rule and family returned from Denver Sunday. They have been there three weeks while Beatrice was receiving treatment for severe sinus trouble. Before they returned they visited Mrs. Joe Dennis at Loveland. It was then that they heard for the first time of the death of Mrs. Dennis’ daughter, Mrs. H.J. Catterole at Tracy, California, early in May. Mrs. Catterole will be remembered here as Mabel Dennis. She left five children.

Mr. J. Clark Williams, after a visit with his uncle, Griffith Williams and wife of this city, returned to Chicago Friday, after a pleasant vacation in the mountains. The young man is a teacher in the conservatory of music in Chicago.

Miss Mabel Quiller left for Gilpin on Wednesday, on a visit with her aunt, Mrs. M. Weisbeck.

Judge Flor Ashbaugh and bride returned Wednesday evening from their honeymoon trip of three weeks spent in the east, and have commenced housekeeping in their own residence on East Fifth Street, this city.

Lamont & Ballard, the contractors, have secured the contract for the erection of an eight room residence for John Heim, which will occupy the lot between his brick building on West High Street and the residence of Mrs. Batchelder.

Died: The little son of Mr. and Mrs. V. Vallero, who left Central City last week for their old home in Italy, was killed near Odessa, Missouri, Sunday, by falling from the Chicago & Alton train, and the body was taken to New York for burial.

Messrs. L.C. Miley, William Lindsey and J.B. Norton and associates were working good claims on the Fisk Mine.

John H. Hence and wife arrived by coach from the east on Tuesday last.

Joseph Kingsbury was seriously injured in the shaft on the Burroughs Mine on Wednesday last. He was being hoisted from the shaft by his partner, Mr. Bolsinger, and when about 20 feet from the bottom he was struck on the head by a falling rock, knocked out of the bucket, and landed in the bottom of the shaft just as a round of holes went off. He was badly cut and bruised from the fall and explosion.

END_OF_DOCUMENT_TOKEN_TO_BE_REPLACED

Where the dead get to tell their story By Jaclyn Schrock On Saturday, August 21, the Gilpin Historical Society held their annual Cemetery Crawl. Tickets allowed the shuttle of hundreds of guests from the Teller House parking lot to the Cemetery. Depending on v... END_OF_DOCUMENT_TOKEN_TO_BE_REPLACED

Benefitting the county, schools, and much more By Don Ireland   This year marks the 30th anniversary of casinos opening in the former little mining towns of Black Hawk, Central City and Cripple Creek, Colorado. In those early years, smoking was allowed inside ... END_OF_DOCUMENT_TOKEN_TO_BE_REPLACED