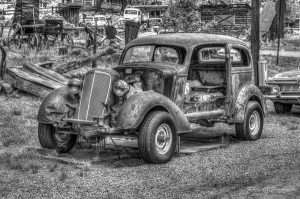 It may go down in the history of the Gilpin County Historical Society as its most controversial year on record. Between the ups and downs the society has experienced the past couple of years, the railroad, and the purchase of the Thomas-Billings House, another obstacle has been thrown in the way off the society. Just when the society was in a position to salvage what was left of the summer by getting the train in operation, a legal maneuver has stopped those plans. At 4:30p.m. Monday, Sheriff Rosetta Anderle was presented a warrant of restraint halting the scheduled tax sale of railroad equipment that was to be held the following morning. Anderle apologized to those who showed up for the sale, but explained that it was cancelled by law, and would be delayed for 30 days. The Black Hawk-Central City Narrow Gauge Railroad, Inc., filed Chapter 7 bankruptcy on Monday, she explained. This move on their part automatically puts the sale on a 30-day hold, with all railroad assets being taken over by the trustee of the bankruptcy court. On May 25, the society received a favorable ruling from a court of arbitration concerning the railroad. That arbitration process was the result of three years of difficulty between the society, which owns the train, and Black Hawk-Central City Narrow Gauge Railroad, Inc., the lessee who owns the track. The society repossessed the train February 3 because of non-payment by the lessee on train taxes and other non-payment problems. Also at issue for arbitration was the fact that the lease expired with the railway company on April 9. The principals of the railroad failed to notify the society that it intended to renew its lease. Arbitrator Harry Atwell ruled on May 25 that the society was due $5,111.40, which included lease charges, taxes and attorney’s fees. The significance to the society of the bankruptcy, said attorney Jerald Devitt, is the loss of time. The society was ready to immediately implement plans to operate the train. It will be up to the society’s board, Devitt said, if he is to pursue a relief from the stay. Society member Alan Granruth was disappointed by the turn of events. He met with a boiler inspector who was already scheduled for an inspection on Tuesday. “That just about takes care of our plans to run the train this summer,” said society president Bonnie Merchant. “We were prepared to bid what was owed the society on Tuesday,” she continued, plus an undisclosed amount over and above that. The train will remain where it has been sitting for months, locked and motionless, waiting for another legal decision on its fate.

Died: Harold Pyle, former owner of the Golden Rose Hotel and Teller House, died July 26, at the age of 57. Born December 19, 1932, in Houston, Texas, to Charles W. and Minnie P. (Witter) Pyle, he was raised in Texas. Pyle moved to Colorado in 1968, and was a resident of Boulder. He owned and operated the Golden Rose Hotel and Teller House for many years in Central City. Pyle was instrumental in restoring the hotel. At the time of his death he was president of Catastrophe Adjusters of Boulder, an insurance adjustment company. He served on the board of the Colorado Music Festival and was a member of the Unitarian Universalist Church in Boulder. He is survived by his wife, Janet Pyle, of Boulder. Memorial services were held July 31 at Unitarian Universalist Church in Boulder.

Across the Crossroads, by A.F. Mayham: One of the greatest mysteries of life is how the goon your daughter married can be the father of the greatest grandchild in the world. And to top that it is reported that state prisons are using striped toothpaste. As the donut said to the layer cake: “If I had your dough I wouldn’t be hanging around in his hole.”

Pal Ihrig, an employee of the Opera House Association for the past ten years, while painting the roof of the old Charles Matthews Law Office opposite the Court House, fell a distance of over 40 feet Sunday morning, incurring a fracture of his ankle and numerous sprains and bruises. He was taken to St. Luke’s Hospital in Denver is reported as resting comfortably.

Harold McMillan, employed by the State Highway Department, has been transferred to Granby, Colorado, and will leave with his family this weekend. We are sorry to lose them.

Died: Fred G. Wood, 87, a resident of Denver since 1920, was buried Thursday in Fairmount Cemetery. Wood died Monday at the Ivy Manor Nursing Home. He was born September 18, 1873, at Dalton, England, and came to this country as a boy with his parents and settled in Russell Gulch, Colorado. He married Elizabeth Arthur in 1895 at Arvada, Colorado. She died in 1928. Wood worked as an engineer and blacksmith until 1920, and retired 17 years ago as an employee of the Colorado State Highway Department. He was a member of Berkeley Community Congregational Church. Survivors include three sons, Harold F. and Davis S., both of Denver, and Arthur G., of Colorado Springs; a daughter, Mrs. Esther Hostetler, of Denver; a brother, Edward of Denver; nine grandchildren and 18 great-grandchildren.

Died: Mark Edmond Fletcher, long-time sheriff of Grand County, was buried Saturday in Crown Hill. Mt. Wolford Lodge No. 163, AF & AM, of Kremmling conducted the service. Fletcher died Wednesday afternoon at St. Luke’s Hospital. He was 84. Fletcher was born in Shoals, Indiana, and came with his family to Colorado as a boy. They settled in the Meeker area. As a young man, Fletcher moved to Gilpin County, where he married Lizzie Klein. In 1908, with their two children, the Fletchers moved to Grand County. They lived on a ranch until Fletcher was elected sheriff in 1924. He remained in office 20 years, retiring in 1944 and moving to Denver the following year. He was a member of Georgetown Lodge No. 12, AF & AM; Starlight Chapter No. 127, Order of Eastern Star, and the Colorado Sheriffs and Peace Officers Association. Survivors include his wife; a son, Leonard E. Fletcher, of Denver; a daughter, Elsie E. Ruske, Grand Lake, Colorado, and two grandchildren.

Mrs. Kate Leahey came up from Denver Sunday to look after her property interests.

Neil McKay came up from Denver Sunday, where he had been recuperating from injuries which resulted in a broken right arm several weeks ago, and is getting along nicely under favorable conditions.

Oscar Williams took Elmer Reynolds to Mrs. Worrell’s Home in Denver, Wednesday morning, where he will receive care and attention which he cannot secure here.

Mr. and Mrs. Charles Gage went to Denver Wednesday morning, on business matters and to visit with friends.

Professor William T. Wallace, instructor in the Hastings, Michigan, High School, who is spending his vacation in Colorado, came over from Idaho Springs on Tuesday on a visit with Mr. C.A. McNeill, at Elk Park, which he has been doing for the past ten years.

One of the heaviest hail and rain storms in years visited this section on Monday afternoon, and washed out the roads from one end of the town to the other. When the storm subsided there was 4 inches of hail on the ground in front of the post office. It was the worst storm in 1901.

Mr. George Pyle drove up from Denver on Tuesday to resume work on his tunnel in Little Mammoth Gulch.

Bart Ebli, of this city, and A.P. Boulter, of Smith Hill, returned Tuesday from a camping trip to Middle Park.

Miss Rose Maymon, from Palestine, Texas, came up from Denver on Wednesday evening, on a visit with Mr. and Mrs. Maymon and family for a couple of months.

Jimmie Reynolds handled the reins on the Pioneer hack during the absence of Oscar Williams in Denver.

The 600 foot level in the Ridgewood Mine in this city, where an important strike was made last week, is opening up fine, and is now fully three feet in width, and enough ore is shipped daily to keep 10 rapid drop stamps in the new mill dropping. An assay of a piece of smelting ore taken from the crevice, showed 92 ounces gold and 14 ounces silver, a total valuation of $1,852 to the ton.

The funerals of Joseph Slaviero and A. Mazzini occurred last Sunday morning from the Catholic Church, and was attended by all the different Italian Societies of the county. The double funeral was one of the largest ever seen in the county.

The Franco-Prussian War was on in earnest, and was occupying the front pages of the eastern dailies.

Cy. Hurd had returned from the Grand Island mining district in Boulder County, and reported the sale of the Boulder County lode by Carter & Company of Boulder to Mr. Cutter from $10,000 in cash and $40,000 in mining stock.

Foreman and Lake were working the Smith Lode in Chase Gulch and taking out ore that was running from 4 to 5 ounces gold to the cord, while the Orahood claim on the same lode was running 6 ounces to the cord.

The ore reduction works of Cash, Rockwell & Company in Chase Gulch, were running to their fullest capacity on tailings and first-class ore.

Honorable Jerome B. Chaffee came up from Denver on Tuesday, on business matters.

Rollins & Company, who were working their gulch claims on North Clear Creek, were taking out a half an ounce of gold to the man working on the claims.

Died: Mr. J.C. Work, a printer employed on the Register, died suddenly after an illness of three days. He had served in an Indiana regiment in the Union army, and came out here with General Lessig’s surveying party in 1869. He was a member of the Masonic and good Templar lodges of the county.