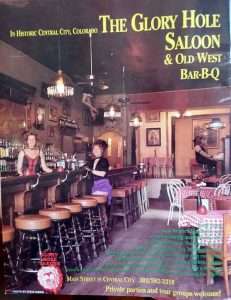 When a 200-ton boulder came crashing down on a Big Thompson Canyon house this week, crushing a sleeping couple with its massive bilk, the Larimer County Sheriff’s Office called the Gilpin County Mine Rescue Team for technical advice. Sizing up the situation, two members of the team, Van Cullar and Steve Yanchunis, drove to the scene not far from Estes Park. Fearing that the mountain would release additional boulders, Larimer County emergency personnel were hesitant to begin working the scene. Cullar, a geologist, followed the boulder’s path up the side of the mountain and determined that it was stable. On its way down the steep slope, the massive rock, which measured 13’x13’x26’, sent boulders weighing 10 tons flying 50 yards and more through the trees, shearing off the tops and gouging a scar into the mountain. A boulder estimated to have been as large as the one that killed the sleeping couple shattered into pieces from the force when it was struck. Although their prime motivation in calling Gilpin County Mine Rescue was safety, the Larimer County officials also needed technical advice. Yanchunis, a miner, was able to excavate the bodies from beneath the rock. Local officials at the scene had thought it would be necessary to drill and blast in order to extricate the remains.

The fire that destroyed Columbine Castle on June 11 was suspicious and is still under investigation, said Jeffco District Attorney’s Office representatives this week. “Nothing has been found that points to natural causes,” said Investigator Clint Blackhurst; there were no lightning strikes in the area, the house was powered by a self-contained generator that was turned off, and spontaneous combustion seems unlikely. Samples of burned areas are being tested, but until the investigation is complete, said spokesman Brian Terrat, there really isn’t much to report. The fire in the unoccupied two-story building broke out early in the afternoon. By the time firefighters reached the remote location northwest of Apex, the building was engulfed in flames. Firefighters from three volunteer departments kept the flames from spreading to adjacent buildings and the surrounding woods despite strong winds and an exploding propane tank. Anyone with information about the fire is asked to call Investigator Clint Blackhurst at the Jeffco DA’s Office, or the Gilpin County Sheriff’s Office.

Died: Larry James Pallotto died Sunday, July 22, at the age of 45. He was the former owner of Poco’s Restaurant in Central City for many years. Born in Denver on February 1, 1945, to Albert L. and Josephine Pallotto, he attended school in the metro area. After graduating from Lakewood High School, he studied music at Southern Colorado State in Pueblo. Pallotto served in the U.S. Navy from 1969-1972, and was stationed at various places across the United States. An accomplished accordion player, Pallotto won many awards in New York and Chicago. After leaving Gilpin County, he worked for Continental Airlines, operated a restaurant in Denver for a year, and did computer research for Data Brokers. He died at Imperial Health Care Center in Denver, where he lived for a short time. Pallotto is survived by his mother, Josephine Pallotto of Lakewood; sister Judy Kringen of Lakewood; brother Mark Pallotto of Denver; and niece Shelly Kringen of Lakewood. Services were held at Runyan Stevenson Capitol Mortuary in Lakewood on July 25.

Across the Crossroads, by A.F. Mayham: Ted Hefner, postmaster of the Mile-High City post office, expects to deliver an oration next Wednesday at the Denver Mining Club luncheon. His talk will center around the “Pony Express” and touch on the workings of the new mail sorting equipment down on Wazee Street. Also among the news items as yet unpublicized is the report of a rich gold find at Lake City. A sample chunk of ore about the size of a fist carried a streak of gold about the size of a lead pencil traversing the length of the sample—rich stuff. Maybe it will be introduced in Congress before election time. It wasn’t discovered in tome to be inserted in the Republican platform along with the Civil Rights paragraph.

The Smorgasbord was the scene of a lovely party last Thursday evening. The occasion being the announcement of the engagement of Oivind Bjnoren of the staff at the Smorgasbord and Miss Patricia Harris of Denver. Present were Mr. Bjnoren’s parents from Norway and her parents from Sterling, and grandmother, Mrs. Culbertson of Aurora, and many friends to wish them well.

Douglas Morrison and wife of Denver made their annual pilgrimage to Central City to visit old friends and take in various sights. Doug was born here and spent his early youth here before moving to Denver, where he has been in the employ of Garner of Denver for the past forty-three years. It’s always nice to talk with Doug and reminisce about other days.

Richard White and Don Dorsey, both of California, who have been operating the Claim Jumpers Café for the past five or six months, took the name literally and jumped the claim, leaving Lee Lyttle, the owner, gazing sorrowfully at the claim which proved worthless. This is the second time Lee has experienced such a thing, the former one being Antonio, who left in the middle of the night. Several waitresses and kitchen help are left holding the bag after having not been paid for their work for the past two weeks. Warrants have been issued for the arrests of the two, and it is hoped they will be apprehended and returned here for trial.

Only one-fourth of a normal crop of peas is being harvested in the Guy Hill district. Severe drought, with total lack of rain when it was most needed during the growing period, caused the shortage. The rains that broke the drought came too late to do any good to the crop. Prices on the Denver market are about the same as last year, seven to eight cents a pound.

Mrs. Margaret Ross, manager of the Thompson-Zumsteg dry goods store in this city, returned Monday from her vacation, which she spent with her son in the southern part of the state and adjoining states.

Mr. John Vivian, of Golden, the Republican candidate for designation for district judge of this judicial district, before the District convention, was calling on the Republican voters in this section on Tuesday last.

Died: In Denver, July 28th, 1930, Mrs. Effie Tabb, of Black Hawk, aged 69 years. Deceased was the widow of John Tabb, who died some 27 years ago. The family came to Colorado from Pennsylvania in 1879, and settled in Gilpin County, where the deceased has lived all these years. Suffering from a goiter she went to Denver a few weeks ago to undergo an operation for its removal. The operation was successful, and apparently she was on the road to recovery, but other complications developed, which resulted in her death. She is survived by two daughters, Mrs. Otto M. Blake, and Miss Hazel Tabb, both of Black Hawk, to whom the sympathies of the entire community are extended, in the loss of a kind and loving mother. She was a member of the Woodcraft, Rebekah, and Maccabee lodges. Funeral services were held yesterday afternoon at the Rogers Mortuary in Denver, with Woodcraft services, followed by interment in Fairmount cemetery.

Thomas Chapple and wife, John Curnow and wife, R.G. Warren and niece, Mrs. Stratton, John Prouse and Nick Prouse, of Nevadaville, were among the number who went over to Empire on Sunday to see the ball game played between the Nevadaville boys and a team at Empire. Nevadaville won by a score of 13 to 12.

Miss Clara Ross returned to Boulder on Tuesday, after a visit with her father in Leavenworth Gulch.

A good strike of rich ore was made in the 500 foot east level in the Ridgewood Mine, in this city, during the week, in the shape of a streak of smelting ore measuring between eight and ten inches in width, which showed good in the panning process, and when placed in the forge and heated, shows considerable free gold. An assay made of the streak showed values of $260 per ton, and an assay of the big streak of mill ore, by the side of the smelting ore, went 1 ½ ounces gold to the ton, which is especially good milling ore.

Sinking operations will be completed for the present at the Running Lode, below Black Hawk, on the 100-foot contract, which makes the shaft 500 feet in depth. In sinking this lift of 100 feet, Superintendent Thomas Dunstone says that there is a nice crevice of ore in the shaft, and have about three feet in sight when they commence drifting. A shipment was made to the Chamberlain sampling works last week, which gave values of 3.70 ounces gold and 107 ounces silver, a total valuation of $126 per ton.

Died: At the Insane Asylum at Pueblo, August 2nd, 1900, A. Mazzini, formerly of this city.

Mr. A. Jacobs arrived by coach from the Pacific coast on Friday afternoon.

Brehm & Patz informed the public that their saw mill on Ralston Creek was in operation.

The Grass Valley Mining Company, John Scudder, superintendent, was running 77 stamps on Rhoderick Dhu and Prize ore, and expected to have 150 miners employed in less than a month.

The California Mine was being worked under a lease and was turning out about 300 ounces gold every week.

Mr. Crohn, of the Temple of Fashion store, left for the East on Wednesday.

The merchants had agreed amongst themselves that collections were to be made for goods sold, on every Monday, instead of the first of every month, as had been the practice before.

END_OF_DOCUMENT_TOKEN_TO_BE_REPLACED

Benefitting the county, schools, and much more By Don Ireland   This year marks the 30th anniversary of casinos opening in the former little mining towns of Black Hawk, Central City and Cripple Creek, Colorado. In those early years, smoking was allowed inside ... END_OF_DOCUMENT_TOKEN_TO_BE_REPLACED

Where the dead get to tell their story By Jaclyn Schrock On Saturday, August 21, the Gilpin Historical Society held their annual Cemetery Crawl. Tickets allowed the shuttle of hundreds of guests from the Teller House parking lot to the Cemetery. Depending on v... END_OF_DOCUMENT_TOKEN_TO_BE_REPLACED