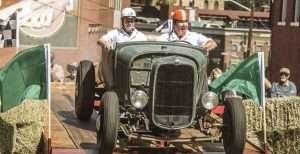 Died: John Francis William “Jack” Brown died Sunday, July 15th, at St. Anthony’s Hospital after an extended illness. Born May 6, 1923, in Paisley, Scotland, he was the son of William and Isabella (Baxter) Brown. The family moved to Detroit while he was a young boy. Though he was an American citizen, Brown was proud of his Scottish heritage, and still spoke with a wee bit of a brogue. He served with the Merchant Marines during World War II, and was a sergeant in the U.S. Air Force during the Korean War, when he worked as a mechanic in Japan. He also served in Vietnam in a civilian capacity. Brown moved to Central City from Detroit in 1965. He had become familiar with Central City, which he often described as “the neatest little town in the whole world,” while stationed at Lowry AFB. After tending bar at a number of local taverns, he finally settled in at the Gold Coin Saloon. For 26 years, he tended bar at the Coin, where his “service without a smile” became a tradition, and where “little tiny umbrellas” were banned from drinks. Brown made friends with visitors from all over the world, some of whom sent him exotic libations from their homelands. Locals and visitors alike—some famous, others perhaps infamous—enjoyed Brown’s hospitality and would stop in for a drink and a chat. At the end of each workday, Brown could be found holding court at the big round table at the back of the Coin. How he managed to surround himself with a bevy of beauties was the source of much consternation for local men of an amorous bend. Finally, Brown would retire to his apartment above the Coin, where he lived with his feline companion Boy, so named for certain distinctive masculine characteristics. Jack Brown, the complete bartender, had compiled a veritable reference library behind the bar at the Gold Coin. Tucked away in cubbyholes and drawers were a wide variety of materials intended to provide the final word on issues in dispute. Once, he even pulled out a copy of the U.S. Constitution in order to settle a heated debate. He had amassed an interesting collection of mementos from friends, his most prized being a composite cover of People magazine featuring Brown with newswoman Connie Chung, her arm draped over his shoulder. He was a member of the Central City Elks Lodge, No. 557, and Cody Thomas Post 166 of the American Legion. Brown is survived by a daughter, Peggy Brown of Detroit, and a sister, Margaret Stocker of Orton Villa, MI. He was preceded in death by a son. Following cremation, part of the ashes will be placed in the family plot in Michigan, and part will remain in Central City. Arrangements are being handled by Vince and Terri Hennigan at Tomford Mortuary in Idaho Springs. There will be a wake tonight at the Gold Coin at 5:30 pm.

Died: Marion George Webber, Ph. D., died at Southeast Memorial Hospital in Houston, Texas, after a brief illness. He was 68. Born in Golden, December 8, 1921, Webber attended the Mountain House School on Golden Gate Canyon Rd., after which he entered Gilpin County High School in Central City. A 1940 graduate of Gilpin High, Webber had planned to attend the class reunion scheduled for later this month.  While in high school, Webber was employed by Frank and Gladys Daugherty at the Daugherty Pharmacy, where he developed an interest in his future career. Valedictorian of his class, Webber was awarded a scholarship to the University of Colorado. After a two-year volunteer stint in the U.S. Army Tank Corps during which he was part of the invasion forces in France and Germany, Webber returned to Colorado to complete his undergraduate work in pharmacy, and to marry Cecelia Kelly. After earning a doctorate in pharmaceutical chemistry in Florida, Webber and his family moved to Houston, where he taught at the University of Houston in the Pharmacy Department. He retired after 33 years as a full professor in 1983, and served as Professor Emeritus until his death. Webber is survived by his wife, Cecelia Kelly Webber; daughters Therese Suarez, Ann Stranahan and Becky Webber; sons Kelly, Bill, Chris, Pat, Joe and Bob; a sister, Lois Jantzen; brothers Charles Webber and Lawrence Webber, and 15 grandchildren.

Died: Zelda M. Buck, longtime resident of the Rollinsville area, died July 10, 1990, at the age of 84, at the Boulder Manor Health Care Center. Born November 5, 1905, in Libertyville, Iowa, to F.J. Hoffman and Kate Wapner Hoffman, Zelda married John S. Buck, known to many people in Gilpin County, in September 1929 at the Little Brown Church in the Vale, in Iowa. Zelda taught in country schools and then later she taught in elementary schools until her retirement in the early 1960s. She received her degree in education from Northern Illinois University. Zelda moved to Colorado in 1967 from Illinois. She resided in the Rollinsville area for over 20 years, and was a member of the Methodist Church. In addition to her husband, she is survived by her son, Arden Buck of Boulder, her daughter, Mary Lynn Cline of Longmont; two sisters, Margaret Luvaas of Cedar Rapids, Iowa, and Pearle Davis of Mt. Morris, Illinois; six grandchildren and five great-grandchildren. She was preceded in death by two sisters. Private family services will be held at a later date.

Died: Caroline Sherwood, 76, of Forest Hills, died July 15 at Lutheran Medical Center in Wheat Ridge. Born March 26, 1914, in Holland, MI, she was the daughter of Charles and Amelia Larson. Employed as a factory worker in the automobile industry, she married Willard B. Sherwood in Lavonia, MI, in 1945. The couple later moved to Forest Hills in Gilpin County. In addition to her husband, she is survived by a daughter, Carol Hochmueller of Bailey, Colorado; two sons, Charles McNalley of Otisville, MI, and Frank McNally of Redford, MI; a brother, Rupert Larson of Idaho; two sisters, Jessie Houlihan of Downers Grove, IL, and Olive Larson of Northport, FL; nine grandchildren and five great-grandchildren.

Died: Harry Clark, who was Gilpin County Commissioner from 1967 to 1975, died June 27, 1900. Clark, 92, died of natural cause in his Boulder home. Born March 22, 1898, in Redding, IA, Clark was the son of Joel and Elizabeth (Poore) Clark. He married Elizabeth Pringle in Riverside, IL, on October 4, 1919. Clark was a retired employee of the U.S. Bureau of Public Roads. He was a member of the Black Hawk Masonic Lodge No. 11 A.F. & A.M. In addition to his wife, Clark is survived by a son, Harry Clark, Jr., of Boulder; a brother, Joel L. Clark, of San Diego, California; three grandchildren and two great-grandchildren. Masonic graveside services, performed by the Black Hawk Masonic Lodge, were held June 30, at 10 a.m. at the Empire Cemetery, Empire, Colorado.

Across the Crossroads, by A.F. Mayham: The history of third parties in this country hasn’t so far been of a rosy hue, but at every coming election a third party is conversation. Those episodes usually have resulted in a split for both major parties with a few sore heads left over. Now we have a movement for a candidate to run on a platform of reduced spending and a gold standard. Judging by reports our spending is ample now and if the waste could be turned into sensible spending, the taxes could be reduced pronto. Word gets out that when Congress convenes in August the spending will be upped on the pretense of national defense. Taking the word of those in the know, our defenses are more than adequate now, but we have to have election propaganda no matter what the circumstances may be.

Wilbur Rule and family, of Steamboat Springs, arrived here on a short visit with relatives, and will go to Denver on business matters and remain until after the Gilpin County picnic, to be held on Saturday of this week.

Miss Eileen Lawry, of Victor, Colorado, arrived in Central on Sunday, on a visit with her uncle Hugh Lawry, and aunt, Mrs. William Mitchell, of this city.

Oscar Williams will handle the reins on the Pioneer Hack.

Misses Annie Branch and Fannie George visited in Denver over Sunday. On their return home they were accompanied by Miss May George, who had been visiting friends in Denver.

The Abilene, Kansas, baseball players, who have been traveling over the country playing with local clubs, played two games with the local team on Friday and Saturday, winning both games, the first by a score of 24 to 11 and the second one by 21 to 7. They carry their own brass band and orchestra with them, and gave a dance at Armory Hall on Friday night, to help pay their expenses, and a large crowd was present.

At the pump shaft on the Gunnell Mine, stone masons are putting in a foundation for a new 100 horsepower hoister, which is intended to take the place of the old slack belt hoister that has been in use for over thirty years The water is being gradually lowered by the Cornish pump, but it will be some time before sinking the shaft can commence. A force of 70 men are working on company account, and with the leasers and tributers, the mine gives employment to over 100 men, and 200 cords of mill ore is shipped each month.

The Denver Republican said: “Henry P. Lowe, recently manager of the Topeka Mine in Gilpin County, has received notice from the Paris exposition that a special medal has been awarded him for a rare specimen of gold bearing quartz from that property. This award is of special importance, as it is only in cases of merit that awards are given for individual exhibits. Mr. Lowe does not yet know the character of the medal, but expects to receive more complete details in a few days. The specimen was secured by F. J. V. Skiff, when here last spring. It was then on exhibition at Bell’s lapidary establishment, and before Mr. Lowe would consent to its being sent to Paris, its return was insured by a prominent banking house of New York and Paris, under a forfeit of $1,800. The specimen is a cube 18 inches square, weighing 80 pounds, and the estimated value is $20 per pound. It is free gold quartz, taken from the hanging wall of the Topeka Mine, and two sides are left in their natural condition, showing the slickensides at the point of contact with the country rock, and the other sides have been cut and polished to show the masses of free gold permeating the quartz.”

McFarland and Jefferson opened a restaurant in the place formerly occupied as a furniture house by Fred Sessler, and offered first class board at $10 per week.

The “California Overland Minstrels” were playing at the Montana Theatre, in this city, and among those taking part were such familiar names as Farron, Wilson, and Courtley.

General Cassius M. Clay and party from the East were visiting in Gilpin and Clear Creek counties.

Frank Teats as secretary and A.W. Geary as corresponding secretary of the first nine of the Stars of the Rocky Mountains baseball club, offered to play any nine in the mountains for baseball.

Alexander Cameron cleaned up 57 ounces of gulch gold last week from his placer claims on Clear Creek below Black Hawk.

Married: In Denver, July 25th, 1870, Jacob Becker and Miss Annie Zeilor, both of this city.

END_OF_DOCUMENT_TOKEN_TO_BE_REPLACED

Where the dead get to tell their story By Jaclyn Schrock On Saturday, August 21, the Gilpin Historical Society held their annual Cemetery Crawl. Tickets allowed the shuttle of hundreds of guests from the Teller House parking lot to the Cemetery. Depending on v... END_OF_DOCUMENT_TOKEN_TO_BE_REPLACED