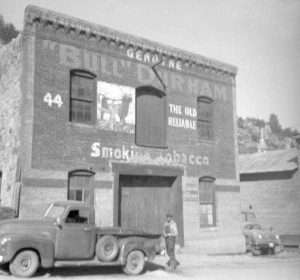 The Thomas-Billings House is going to the Gilpin County Historical Society after all, it seems, according to an announcement made at Wednesday’s meeting of the Central City aldermen. It looks as though the society will be able to purchase the house, despite the owners raising the price at the last minute, said historical society board member Alan Granruth, through the generosity of benefactors whose names are not yet being released. After learning of the difficulties the society was encountering in attempting to purchase the museum, Granruth told the council, someone offered on Wednesday afternoon to give the society $95,000 on the condition that the group raise the remaining $15,000 needed to meet the asking price of the museum’s owners, Mike and Darlene Leslie. A pledge for $9,500 from the Gates Foundation left the group with a shortfall of $5,500, which was quickly promised from another individual interested in preserving the Thomas-Billings House Museum. “The board of directors is elated,” Granruth said, “to have found people generous enough to make this possible.” When he left the meeting, Granruth was on his way to work out details of the sale with the Leslies. The purchase is to include the house and all its contents. Granruth said he expects closing to take place by mid-August.

Late this month, the assets of the Black Hawk-Central City Narrow Gauge Railroad will be sold by the Gilpin County Sheriff’s Department. The sale has been authorized to pay the Gilpin County Historical Society more than $5,000 awarded in a recent arbitration settlement. The arbitrator decreed on May 2 that the railroad pay $5,498.52 in damages, costs and legal fees as the result of contractual disputes over the last two years. A historical society report issued this week said that the society will bid on the property in an effort to acquire the track and other equipment “as compensation for the amount owed.” If it gets title to the track and equipment, the report said, the historical society plans to fire up Old 71, the society’s locomotive, right away. Easements are being negotiated with property owners and an engineer is ready to start work. In an effort to reduce the danger of brush fires along the track, the society plans to use bituminous coal in the engine. Railroad president Court Hammond could not be reached for comment either at home or at the railroad, whose phone has been disconnected.

Bill and Janet Vaughn are the proud parents of a new daughter, Sara Ruth, born at 2:22 a.m., July 2, at St. Joseph Hospital in Denver. Sara weighed in at 6 pounds, 12 ounces and measured 19 ½ inches at birth. She joins sisters Lindsay and Katie, and brother Shane at the family’s Chalet Park home. Maternal grandparents are Ed and Joan Madden, of Matteson, IL. Paternal grandparents are Carroll and Arlene Vaughn, Chariton, IA. Sara’s paternal great-grandfather is Ed Ellsworth, of Ames, IA.

Across the Crossroads, by A.F. Mayham: Uncle Ed took off for Central City last Wednesday in company with Atty. Candell, just for protection and amiable company. Ed wanted to see what a lot of Shriners did after about 2,000 of them arrived, many on motorcycles. Well, they got wet for it rained cats and dogs for a while. Bumped into some old friends like Bill Russell and Henry Ress, two has-been miners. Uncle also wanted to see what a sick editor looked like so he went to call on Rae Laird who has returned from a tussle with nurses in St. Anthony’s. He was doing all right. Then Hugh Lawry needed attention, so Ed called on the County Treasurer and he seemed full of pep and figures. The Shriners were flocking in the lodge rooms of No. 6 but the lodge goat, which gets rambunctious at times, was securely tied and no fatalities occurred. The restaurants were so full that apple pie and coffee had to suffice for sustenance. After taking another look at the Face on the Barroom Floor, the clouds grew dark and people were scurrying for shelter. The town dogs also disappeared, but inside the Teller House people were chawing something, but it didn’t look like “hot dogs.”

We wish Alex Murphy of the Denver Post would refrain from writing happenings of Central City when he only learns one side of the events. They are not conductive to good taste and leave a wrong impression on visitors here, and also the readers of the Post. Cut it out, Alex, and if you want to write questionable articles first, get the true facts.

We are considerably handicapped this week due to the absence of Ernest Wright, the assistant editor and foreman of the Job Department of the Weekly Register-Call, who was called to Texas on account of the serious illness of his father.

A car driven by a lady from Montana rammed into the fire plug at the corner of Main, Lawrence, and Eureka streets Sunday afternoon, breaking the pipe under the surface and allowing several thousand gallons of water to go merrily down the street. As the mainline from the reservoir was broken, pressure could not build up to the houses on Winnebago Hill and Spring Street, and as a consequence, no water was available for several hours. Monday morning, Water Commissioner Joe Menegatti, with his efficient crew, and the help of Melvin Blake, of Black Hawk, repaired the damage and everyone was happy.

Mr. and Mrs. Frank Kinne, who have been guests of the Harry Clarks for the past week, left Thursday for their home in Chicago.

Mr. and Mrs. Howard Knoll have rented a couple rooms at the Orville Gardner home in Chase Gulch, which they will occupy this summer.

The M.K. Petersons have their two little granddaughters as guests this week while the parents are on a fishing trip.

Mr. and Mrs. Arch Boyd of Grand Junction were here Friday to do some repairs on the roof of the Dunstone House.

It was a sight worth seeing to watch the Round-up Riders last Tuesday morning as a hundred or so riders of spirited horses came down Smith Hill road, then up Clear Creek and slowly zig-zagged up the steep mountain toward Lake Gulch and Central City.

Mrs. O.S. Westover, daughter and husband, of Santa Monica, California, were visitors here the first of the week. Mrs. Westover came to Gilpin County in 1863, remaining until 1871, when the family moved to Denver.

James Rule and wife were up from Denver on Saturday, on business matters and to visit with relatives.

Mr. Earl Quiller, who went as a delegate from Central City Lodge, Order of Elks, to the national convention at Atlantic City, New Jersey, returned home on Sunday evening, after having had a delightful time and a safe journey in going and returning. Just thirty years ago this week Thomas Plemmons was the delegate from Central City lodge, to the meeting held at the same city.

The Misses Francis and Emzella Channing, and Margaret Price, who have been visiting Mr. and Mrs. W.O. Ziege and daughter, left for Denver Sunday.

Died: In Denver, at St. Anthony’s Hospital, July 14th, 1930, Mrs. Elizabeth Mitchell, aged 73 years. Deceased was the widow of the late William Mitchell, a former sheriff and mine operator in Gilpin County, and was well known and highly esteemed by all who knew her. She was born in Cornwall, England, and came to Colorado in 1872, with her parents, who located in this city, and in 1874 was married to Mr. Mitchell. She had been ill of late years from complications due to old age, and while everything was done to relieve her suffering, she was compelled to answer the summons last Monday. She is survived by two sons, Thomas H. Mitchell, a deputy sheriff of Gilpin County, and William Mitchell, Jr., of Central City, and four daughters, Mrs. Anna Webster, of Portland, Oregon, Mrs. Maude Powers, of this city, Mrs. Flora Thompson, of Littleton, Colorado, and Mrs. Jane Gray, of Denver. Funeral services will be held Saturday morning at 10 o’clock at the Young Mortuary, in Denver, after which the remains will be brought to this city for interment in the Knights of Pythias Cemetery, beside her husband.

Phil Parenteau and Ike Hardy visited Boulder Park on Sunday, and returned that evening with a nice lot of trout.

Mrs. Ralph Chase and children, who have been visiting relatives in Missouri, returned home Sunday evening.

Wilbur Rule and wife returned Wednesday from their honeymoon trip with relatives in Wisconsin and other eastern states.

Major Hal Sayre, wife and son, drove over from Boulder the first of the week, and intend remaining here for some time.

Word was received in Nevadaville during the week that the Oates boys, Charley and Nicholas, former residents of this place, were on the sick list at Telluride, Colorado, the former being in the hospital, while the latter had his foot mashed.

Ex-sheriff William Mitchell is taking out considerable ore from his lease on the East Nottaway Mine, in Lake District, and is making regular shipments of both milling and smelting ore, the last lot of smelting ore returning 6 ounces gold to the ton, for the first class, and 3 ounces ore to the ton for the second class.

Alexander Cameron cleaned up nearly 40 ounces of gulch gold during the week from his placer mind on Clear Creek.

END_OF_DOCUMENT_TOKEN_TO_BE_REPLACED

Benefitting the county, schools, and much more By Don Ireland   This year marks the 30th anniversary of casinos opening in the former little mining towns of Black Hawk, Central City and Cripple Creek, Colorado. In those early years, smoking was allowed inside ... END_OF_DOCUMENT_TOKEN_TO_BE_REPLACED