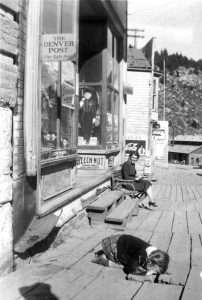 Reviving an old tradition, the historical societies of Gilpin County and Idaho Springs together are sponsoring a Pony Express Mail Ride between Black Hawk and Idaho Springs on July 22, at about 4 p.m. Saddlebags of specially postmarked mail will be picked up by a rider at each of the two post offices and the riders will proceed on horseback over Virginia Canyon. At the midway point, the riders will meet and exchange bags, returning to their respective post offices, where the letters will receive a second commemorative cancellation. Philatelists, history buffs, and souvenir collectors interested in receiving a specially franked enveloped can send a self-addressed, stamped envelope along with a donation of $1 for each piece of commemorative mail to the Gilpin County Historical Society. Your request must be received no later than July 21. The Idaho Springs Historical Society also can provide the specially marked letters. Funds raised through the Pony Express Mail Run will benefit the historical societies. Both organizations are non-profit, and donations are tax deductible.

Bess Thomas and Russell Bangert earned black belts in karate after an emotional three-hour test. Instructor Dan Klenda said that the two Gilpin County School students managed the heavy concentration required for the grueling test, which Klenda said was at least as draining for the parents as it was for the kids! Bess and Russell have been studying karate with Klenda for nearly three years.

George Sandrock and his bride, who is from California, are now at home in Gilpin County.

The paper is a bit skimpy this week—a problem caused by technical problems experienced at the last minute. We apologize to our readers, and hope to bring you a lot more local news next week.

Across the Crossroads, by A.F. Mayham: The old Argo Tunnel seems to have been brought to life once again. The Fall River Mining & Exploration Corporation has a corps of men working in the tunnel. Maybe they will find some debris after they get back as far as the Saratoga and maybe they will discover a pot of gold. Legend has it that often one end of the rainbow had its anchor somewhere in the Argo, and of course there is always a pot of gold at the end of the rainbow. When other commodities go down, usually gold goes up as it has always been a hedge against deflation, bad times, sore throat, measles and the seven-year itch. Then, as optimists hold, there is quite apt to be something done about the price of gold before long. The Northwestern Mining Association has obtained over half a million signatures to a proposition to be presented to Congress relating to the stymied price of gold as fixed by the Bretton Woods International agreement of 1945, ala FDR. Father back in the Argo, after dark, ghosts of former famed operators congregate to reminisce on “what used to be,” near the Hot Pot. The Groves family is supposed to own or control the Big Five, the Argo, and the Bald Eagle.

More than five hundred former residents, visitors from various churches throughout the state and tourists were in attendance at the 101st anniversary of St. James Methodist Church last Sunday. The services were impressive and the special music was most beautiful.

The fire truck and firemen were called out Sunday evening to quell a small fire at the rear of the Person building. The fire was caused by trash in the incinerator and alley and took only a few minutes to subdue.

Died: Funeral services for Mrs. Frances F. Warren were held at 1p.m., Wednesday, at Moore Mortuary. Burial was in Crown Hill. Mrs. Warren, wife of Dr. Elmer F. Warren, died Saturday in St. Luke’s Hospital. She was 80. Born July 31, 1870, at Minneapolis, Kansas, Mrs. Warren moved to Colorado in 1905 and to Denver 10 years later. She was marred to Dr. Warren at Hennessey, Oklahoma, in 1906. She was a member of the Montview Presbyterian Church and the Eastern Star. She was a resident of Central City from 1905 to 1915 when Dr. Warren had his dental offices in the First National Bank Building. Surviving are her husband; two sons, H. Clair Warren of Denver, and Dr. George W. Warren of Granby; and one daughter, Mrs. E.T. Benson of Closter, N.J.

Mr. and Mrs. Fred McFarlane came up from Denver Sunday morning, to attend to business matters, and enjoy a day away from the heat of the city.

Mr. Otto Scheffler, wife and daughters, Misses Ruby and Elsine, and son Harold, arrived from Long Beach, California, Friday morning, on a visit at the old home and with friends, and are the guests of Mrs. T. O. Davey and son William, of this city.

Dr. William Schultz has moved over to Nederland, to occupy his old home and to look after his interests there.

Mr. and Mrs. Robert Moon and Mr. and Mrs. Gomer returned from a trip to Texas Monday night, all glad to get into the mountains and escape the heat of the southern region.

Mr. and Mrs. Albert Davis and Mrs. Davis’ mother, of Phoenix, Arizona, returned to Denver Wednesday, after spending a few days in Central, to get away from the heat of the valley.

Master Lawrence Messinger, son of F.H. Messinger, is up from Denver to spend a portion of his vacation in the mountains.

James and Charley Nichols left for Telluride, Colorado, on Thursday last, where they have a job in one of the mines there.

Mrs. A. E. Bonesteel and child returned Saturday from a visit with relatives in Denver.

Edward W. Davis, wife and child, returned Thursday evening from their trip across the ocean, on a visit with relatives and friends in Wales.

Cundy and Company of Black Hawk, have struck silver ore in the Fannie Mine, on Cyclops Mountain west of Black Hawk, that returns 700 ounces of silver to the ton. There are two shafts on the property, one of 80 feet, and one of 200 feet, and their work for the present will be confined to the 200 shaft.

Sinking has commenced in the shaft on the Gladstone Mine in Illinois Central Mining District, by the Gilpin-Boston Mining Company, the contract calling for 100 feet, and when finished the shaft will be 300 feet deep. Stoping is being carried on at a depth of 160 feet, west of the shaft, and a nice crevice is in the stope, from which a 100-ton lot will be shipped to the mills in Black Hawk during the week.

General Hal Sayre and J.G. Mahaney were surveying a road between Fall River and Nevadaville.

Mr. Valentine was working in the Stub Tail Lode in Nevada Gulch, and taking out ore that was running 6 ounces of gold to the ton.

James O’Neil, a cattle thief, was hung at Brown’s bridge, nine miles from Denver, the first of the week.

Halsey M. Rhoads had taken a position with the Daily Herald, of this city, as city and county canvassing agent.

The nominee of the Republican state convention, for delegate to Congress, was Jerome B. Chaffee; and Clinton Reed for district attorney for the second judicial district.

Died: The little son of Mr. Cheeney, while playing on some logs near the Toll Gate in Black Hawk, was caught by a falling log and crushed so badly about the head and face that he died the next morning.

END_OF_DOCUMENT_TOKEN_TO_BE_REPLACED

Benefitting the county, schools, and much more By Don Ireland   This year marks the 30th anniversary of casinos opening in the former little mining towns of Black Hawk, Central City and Cripple Creek, Colorado. In those early years, smoking was allowed inside ... END_OF_DOCUMENT_TOKEN_TO_BE_REPLACED

Where the dead get to tell their story By Jaclyn Schrock On Saturday, August 21, the Gilpin Historical Society held their annual Cemetery Crawl. Tickets allowed the shuttle of hundreds of guests from the Teller House parking lot to the Cemetery. Depending on v... END_OF_DOCUMENT_TOKEN_TO_BE_REPLACED