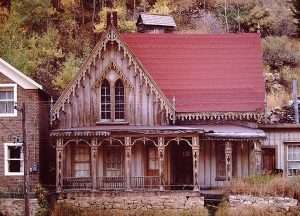 A local citizen phoned the sheriff’s office just after 5:30 Saturday evening to report that a man had just removed a tombstone from the Catholic cemetery and driven off with it in his car. A bulletin was put over the air for law enforcement officers to be on the lookout for the man, and the State Patrol spotted him just beyond Tunnel 1 near Golden. Brett Weldon Bell, 31, of Denver, was charged by the State Patrol with driving under the influence of alcohol and driving under revocation. He was turned over to Gilpin County authorities, who added charges of desecration of a venerated object and felony theft. Bond was set at $2,000, and Bell came up with the money on Tuesday, June 18. He is scheduled to return to Gilpin County on Monday, where he will be advised of the final charges. The headstone, which Bell reportedly said marked the grave of a relative, was recovered. Six markers have been reported stolen from the Idaho Springs cemetery in recent weeks.

Delta Company of the 244th Engineer Battalion has been visible on Lawrence Street in Central City all this week. The “Delta Dawgs” are building a new—and historically accurate—bell tower for Washington Hall. Expect to see the bell in the new tower one day next week. Besides rebuilding the bell tower in Central City, the “Dawgs” are tackling a few projects out at Gilpin County School. The most ambitious task is enlargement of the football field and carving bleachers out of the side of the hill that overlooks the field. The Army Reserve is donating its time, effort, and equipment for these projects—Gilpin School and Central City are providing the necessary materials. It’s an arrangement that pleases everyone. The school gets a first-rate football field; Central City gets a new bell tower; and the “Dawgs” get to spend two weeks camping out at Gilpin County School, which has one of the loveliest views in the area.

Gwen Thomas is resting comfortably at Lutheran Medical Center after a fall at home. She’s sporting a neck brace.

Dee Jones rolled her new car at mile marker two on Highway 119. Dee was lucky enough to escape with a slight concussion, bruises and contusions, but that new car was totaled.

Folks who saw the chopper airlift Jack Brown to St. Anthony’s Hospital last Sunday will be glad to hear he’s in a stable condition, recovering from pneumonia. Get well soon, Jack. All those smiling bartenders are getting to be monotonous!

Ron Kittrell is home after a brief stay in the hospital. An early morning auto accident left him with multiple fractures of his right leg. Ron reportedly rounded a curve on Highway 119 just north of Black Hawk and smashed into the back of a semi that had slowed down to 5 mph to round the curve.

Wreckage of a plane spotted Sunday by fishermen in the mountains of Gilpin County was reached Monday afternoon and identified as the remains of a known crash in April, 1958. Officials of the Federal Aviation Agency identified the wreckage from its license number N778OK, as a Piper Pacer belonging to Lynn Foster of Sherman, Kansas, who crashed more than two years ago on a flight from Denver to Steamboat Springs. A search party, headed by Sheriff Tom E. Collins and Cpl. Raymond Van Hook of the State Patrol, reached the wreckage at 2 p.m. Monday. It was found 23 miles northwest of Central City, near Crater Lake about 2 one-half miles west of the east portal of Moffat Tunnel at an elevation of approximately 12,000 feet. Van Hook said there were no signs of human remains although two youths from Denver, Anthony Veevhiarelli and Eurgen Carelli, both 18, said an unidentified man who first told them about the wreckage said it contained a body. The unidentified man, who reported his find to Denver police, turned out to be Karl Wondrak, 48, of Lakewood. He denied he had seen human remains in the wreckage. An FAA official said the Kansas pilot, slightly injured in the plane crash, had told him in a Boulder hospital that he would get the wreckage removed, but apparently had not. The sheriff said Tuesday he was not entirely satisfied that Monday’s search had turned up the right plane. Collins said he was going back into the area with another search party to make sure.

Ye Olde Editor is home again after a week spent in St. Anthony’s Hospital in Denver. A hospital is not a pleasant place to be, but the hours were shortened by the many get-well cards and flowers sent me by friends for which I express my sincerest thanks. Many times in my “Light Ray” column I have factiously referred to milk as my customary beverage, but it now becomes a reality and double shots will consist of the white fluid from the bovines.

Miss Gertrude Von Balmoos, of Denver, is spending a month at her summer cottage in Central City.

Pianist Millie DeBelle, long a favorite of Central City opera stars and visitors, is back again at her old stand in the Little Kingdom Bar. The versatile musician, who plays boogie as well as the classics, will be on hand to entertain patrons through July. Miss Joanne Herring takes over for the final month of the season.

George McLaughlin was up from Denver to spend the weekend. No opening day festivities would be complete without “Curley” in attendance, and his many friends hope he will be in attendance at these doin’s for the next fifty years.

Mr. W.S. Green and wife, accompanied by their son Milton and wife, and W.S. Junior and wife, came up from Denver Saturday evening to attend the reception and dinner given by Central City Chapter, No. 1, Royal Arch Masons, at the new Chain O’ Mines Hotel that evening. Mr. Green will be remembered as the druggist, who with Mr. A. Rapin, occupied the storerooms in the Odd Fellows building on main Street, some 20 odd years ago. He left here twenty-six years ago, and located in the southern portion of the state, but at present is a resident of Denver.

Dr. William Mark Muchow, president of the Chain O’ Mines Company, which is mining so extensively on the “Path” on Quartz Hill, came out from Evanston, Illinois, on Monday, with a  number of stockholders of the company, and spent here days here looking over the mining property on Quartz Hill, and the big milling plant in this city. On Wednesday, Mr. Muchow shipped back to the Flossy Dental Company, at Evanston, Illinois, 32 pounds of gold retorts, or 384 ounces, which will be disposed of to the dentist of the east, at $32 per ounce. The mint price of gold is $20.67 per ounce, but the gold produced by the Chain O’ Mines Company is so superior for the use of dentists in making gold plates and for filling cavities, that the price of $32 per ounce is paid by them for it, thus bringing to the company a handsome profit by using the gold in this way, instead of selling it to the mint for coinage purposes.

Died: Leo G. Voll, a former well-known resident of this city, died in Long Beach, California, on Saturday last, and is survived by his widow, living in Lynwood, California, and a sister, Mrs. S.W. Nathan, of Long Beach, California. He was born in Georgetown, Colorado, in 1888, and for a number of years worked in the Black Hawk foundry for McFarlane & Company. He was a musical genius, and perfected a system of electrical appliances which he attached to a piano, and with drums and cymbals, which were also operated by electricity, he was a complete orchestra in himself, and furnished music for dances, the opera house, and several times for dances at the annual meetings of the Gilpin County picnic held at Washington Park, Denver. He was a member of Central City Lodge No. 557, Order of Elks, but at the time of his death, he had transferred his membership to Denver Lodge No. 17. While in Denver he developed the Bothwell Syrup Company, which he disposed of before leaving for California. His mother was Mrs. Ignatz Meyer, and resided here for many years until the death of Mr. Meyer, when she went to California, and died there several years ago.

Charley Karns, manager of a mine in Gunnison County, arrived in this city Thursday, intending to remain here for a month or longer, while pumps are being placed in the mine shaft.

Arthur M. Potter arrived Tuesday from New Haven, Connecticut, where he has been attending Yale College, and will spend his summer vacation in the mountains.

Misses Edith B. and Emma L. Horning arrived on Sunday last on a visit with their brother, Charles Horning and wife, of Nevadaville.

Miss Georgia Richards, of Nevadaville, returned Tuesday evening from Greeley, where she visited for the past month with Mrs. Veldrom, formerly Miss Nankervis, of Nevadaville.

Sinking the main shaft on the Running Lode Mine is progressing favorably, with day and night shifts, and about one half off the contract for 100 feet has been completed, making the shaft 450 feet in depth. Foreman Thomas Dunstone says the bottom of the shaft is all ore and regular shipments are being made from that point. The property is being operated by the Gowers Mines Syndicate.

Died: Charles A. Martine, an early resident of this city, died at St. Luke’s Hospital in Denver on Friday. He came to this city in 1866, and opened an assay office here, and soon after went to Georgetown, and it was largely due to his efforts that Georgetown was established permanently as a silver camp.

The fifth anniversary of the marriage of Mr. and Mrs. I.N. Wilcoxen was celebrated in this city on Tuesday evening.

Warren Hussey sold out his banking business in this city to Thatcher, Standley & Company, of this city, on July 1.

Mr. Coulson had been appointed census enumerator for this section of the state, in taking the census.

Died: Edith, the youngest daughter of Warren Hussey, of this city, died at Salt Lake City on Monday last.

END_OF_DOCUMENT_TOKEN_TO_BE_REPLACED

Benefitting the county, schools, and much more By Don Ireland   This year marks the 30th anniversary of casinos opening in the former little mining towns of Black Hawk, Central City and Cripple Creek, Colorado. In those early years, smoking was allowed inside ... END_OF_DOCUMENT_TOKEN_TO_BE_REPLACED