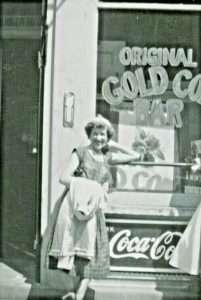 Richard Glenn Tolbert, 36, and Charles Arthur Morgan, 35, have been charged with killing Luther Clyburn and John McDaniel, two men who disappeared from the National Mine near Central City nine years ago. Tolbert was arrested May 31 in Basalt, Colorado, on a warrant for first-degree murder. Morgan, who used the name Bruce Eric “Chuck” Jacobson, was already in jail on unrelated charges. Two counts of first-degree murder and four counts of violent crime were filed against Tolbert in Jefferson County Court. A preliminary hearing is scheduled for July 3 in Gilpin County. Morgan was scheduled to be arraigned Thursday on identical charges. He is already in jail on charges of criminal impersonation and walking away from a work release program in the state of Washington. Since 1978, he has frequently used the alias Bruce Jacobson, and was often called Chuck. The two men are alleged to have killed Clyburn and McDaniel at the National Mine just above Central City on August 14, 1981. When the pair were reported missing, “all of the possible leads on what happened to these men were followed up on at that time, but the case went unsolved,” according to a spokesman from the Jefferson County District Attorney’s Office. Not much happened in the case of the two miners until two months ago, when Harry Martin “Buddy” Brockman, formerly of Central City, told an FBI investigator that he witnessed the killings of Clyburn and McDaniel and helped dispose of the bodies. He later told JeffCo DA’s investigators that the bodies and Clyburn’s truck were in a mineshaft subsequently identified as the Gulch Mine, located about a mile from the National Mine. Brockman, 53, is serving 71 months in a federal prison for armed bank robbery. Brockman, Tolbert and Morgan, who was known as Jacobson while in Central City, were employed by Central Gold Corp., when Clyburn and McDaniel were murdered. Central Gold had leased the National Mine and the Glory Hole Mill from Chain O’ Mines. Clyburn and McDaniel had been introduced by Clyburn’s daughter, Beth Roman, who was secretary to Harry Caldwell, the owner of the National Mine. Clyburn hired McDaniel too help organize a mining operation at the Big Thunder, a property he was leasing from the Chain O’ Mines. Clint Blackhurst, chief investigator with the JeffCo DA’s Office, said Wednesday that, despite media emphasis on knowledge McDaniel might have had about fraudulent practices in Central Gold’s operation, that does not appear to be a primary motive for the murders. “It just doesn’t make sense,” Blackhurst said, noting that many people were aware of discrepancies in the operation. If that were the motive, “they would have had to get rid of three-fourths of the population. The motive is cloudy,” Blackhurst said. “It may be that we’ll never know. It does appear that Mr. Clyburn’s death was the result of being in the wrong place at the wrong time.” Statements made by Brockman and Morgan in an affidavit allege that George Krotter, who was Central Gold’s security chief, told them to kill McDaniel. There is not enough evidence, however, according to Blackhurst, to charge anyone else. The stories of Brockman and Morgan agree in most respects, except for the extent of Brockman’s involvement in the murders. Brockman has said that he was closing up shop for the day when he heard a commotion outside, and that he walked out to find the two had just been killed. Morgan, however, claims that Brockman observed the entire incident, pointing a gun at Morgan the whole time force Morgan to participate in the murders. Tolbert and Morgan will be tried separately in Gilpin County, Blackhurst said.

Died: Richard C. Hicks (1921-1990), son of the late Mr. And Mrs. Alfred C. Hicks of Denver, died June 7, at Rifle, Colorado. He was 68. A longtime resident of Central City, Hicks was well known for the intricately painted Victorian ceilings he created in businesses and homes throughout Central City and Black Hawk. His murals grace the walls of numerous private and public buildings as well. In addition to his painting, Hicks will be remembered for the elaborate costumes he designed for special occasions. He is survived by his sister, Virginia Hicks Brown, of Denver; his brother, Alfred Hicks II of Centerville, Ohio, and several nieces and nephews. He was to be cremated and interred at Bald Mountain Cemetery.

Died: Patricia “Patty” Wilson Tritt (1922-1990) died May 2, 1990, in Newport, California. She was suffering from cancer of the throat. Born December 6th, 1922, in Denver, Tritt grew up in Denver and Central City. She was a resident here for many years. Her mother, Emmy Wilson, at one time owned the Glory Hole Saloon. Tritt bought Crook’s Palace in Black Hawk in 1964 and operated it for four or five years. She was married to Clyde Tritt; they subsequently divorced. Tritt is survived by daughter Michel and granddaughter Jamie Rossovich. She was preceded in death by father Charles Wilson, mother Emily “Emmy” Wilson, and sister Shipley Wilson. Tritt’s great-grandfather, Eben Smith, was a pioneer during the early days of mining in Central City. Smith owned the house on the Casey where Judge Frederic Rodgers and his wife Valerie McNaughton presently reside. He was also a founder of the Colorado National Bank.

Died: Eddie Bohn (1902-1990), Denver businessman, politician and ex-boxer died Sunday at his home from natural causes. He was 88. Many of Gilpin County’s longtime residents recall stopping in at Bohn’s West Colfax restaurant, the Pig N’ Whistle, back in the days when Highway 40, now Colfax Avenue, was their main route into and out of Denver. The Pig N’ Whistle was a favored stop by locals for a bite to eat or a cup of coffee, and a place where one was likely to run into a neighbor.

Across the Crossroads, by A.F. Mayham: Uncle Ed believes in giving bouquets to people while they are alive to enjoy them. In his peregrinations he has yet to discover an unpleasant employee of either the telephone company or the Public Service Company. No matter whether they are digging a trench, climbing a pole, or doing office work, one never gets a grouchy answer from them. You may feel like blowing your top, but they take it good-naturedly without a whimper. Could as much be said for municipal employees? Doubtful. We often see a lot of pictures in the papers of people who like to view their own mug and receive a little publicity, but the prettiest birds have no song and are hard to contact.

The Register-Call Editor, Mr. R.L. Laird, is ill in St. Anthony’s Hospital. We hope he will soon be back on the job.

Randy Anderson will leave next week for camp in Estes Park.

Mr. Hugh Lawry and sister, Mrs. William Mitchell, left Monday morning to attend the funeral of Mrs. Elizabeth Rowe, a former resident of this city, which took place that afternoon at Arvada.

Mr. and Mrs. Frank Maughan and son Robert, were guests of Mr. and Mrs. Gus Grutzmacher on Memorial Day.

Mr. Chase Withrow, who spent the winter months in Denver, came up to Central Wednesday, to spend the summer months at his old home.

Mrs. Charles Trenoweth and daughter, Miss Laura, arrived from Englewood Wednesday, where the latter has been teaching in the public schools, and will spend the vacation period at the old home.

Joseph Jones, who was badly injured in the blast in the Pearce Mine in this city about three months ago, is doing nicely under the circumstances, and is seen to be out walking these fine days. He can see fairly well with his right eye, and will have an operation performed next month on the left eye, and the surgeons say it will be the better of the two.

Miss Ranney, one of the teachers in the public schools in this city, left the first of the week for her home in Michigan, where she will spend her vacation.

The St. Aloysius Academy School closed for the summer on Friday afternoon, at which time appropriate exercises were rendered by the pupils before a large attendance of their parents and friends.

The initial run of the new mill in Black Hawk, just completed for the Boston & Denver Company, operating the Bobtail and other properties of that group of claims, was made on Tuesday, and the entire 80 stamps were dropping on ore. A 360 dynamo, for furnishing lights in the mill, is being installed.

Married: In Golden, June 11th, 1900, at the home of her parents, Charles J. Adams and Miss Lillian Presnell.

Married: In Denver, June 10th, 1900, at the home of the bride, Mr. Max Meyers, of Boulder and Miss Dora Rachofsky.

James B. Belford had been appointed Judge for Colorado.

A trust was formed by the brewers of the county, not to sell beer by the keg for less than five dollars, which was signed by Mack & Good, Haubrich & Kurtz, and William Lehmkuhl.

Rev. Courtland Whitehead, of Black Hawk, had been assigned by Bishop Randall, to the Georgetown Parish.

John H. Hence, the jeweler, moved his stock of jewelry from Georgetown to this city.

Smock’s hotel, the National Hotel on Lawrence Street, was being overhauled and many improvements added.

Alfred Owens, with a force of fifteen men working in the gulch in Pleasant Valley one week, took out gulch gold worth $3,000.

Mrs. M.F. Cody had gone to Denver with the intention of opening up a branch millinery store there.

Rev. G.E. Adams, who had gone to Pueblo to attend the conference, left Brothers Willis and Sowden to fill his place during his absence.

Warren Hussey, the banker, shipped $11,000 in gold to Denver, the purchase for three days.

The Rhoderick Dhu Mine, on Quartz Hill, under the management of Scudder & Sullivan, was producing ore to the value of $1,500 a week.

William Logue and wife had reopened the St. Charles Hotel in Black Hawk.

Died: An aged Ute Indian, who had been under the care of Dr. Reed, of Black Hawk, died on Wednesday, of consumption.

END_OF_DOCUMENT_TOKEN_TO_BE_REPLACED

Where the dead get to tell their story By Jaclyn Schrock On Saturday, August 21, the Gilpin Historical Society held their annual Cemetery Crawl. Tickets allowed the shuttle of hundreds of guests from the Teller House parking lot to the Cemetery. Depending on v... END_OF_DOCUMENT_TOKEN_TO_BE_REPLACED