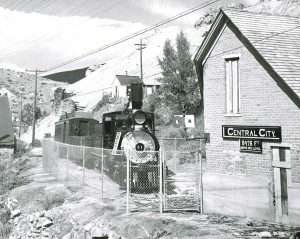 The City of Black Hawk might seek an injunction against the U.S. Environmental Protection Agency (EPA) in order to protect the city’s water and sewage systems. The EPA wants to install a ditch around the top of the tailings pile at the National Mine in order to divert run-on water around the pile instead of over it in an attempt to reduce the amount of acidic water that enters North Clear Creek. The EPA’s choices for the project include installing a culvert underneath Main Street near the sewer plant. Among the EPA’s suggested plans for the project is installation of a culvert under Main Street and beneath City Park to carry water from the National to the creek. There are two ways this could be accomplished, neither of which leave the city fathers with a good feeling. Originally, the EPA wanted to bury the culvert several feet down. This, however, would remove a foot and a half of insulating earth from above the city’s water and sewer lines, increasing the chance of a freeze up of the system. The city balked. Still pursuing the idea of crossing Main Street with a culvert, the EPA proposed to place the culvert near the surface and cover it with earth in order to protect the underground water and sewer lines. Once completed, the culvert would create a three-foot hump the width of the street. Not acceptable, said the aldermen. There are several other solutions to the problem, according to Alderman Bill Lovingier, who has been working with the EPA. All, however, cost a few thousand dollars more than the two preferred by the EPA. EPA officials will be in town Friday, April 13, for a site visit. Several aldermen plan on touring the site to discuss their concerns with the EPA. Although the city has not yet approved any of the EPA’s plans, the agency has awarded a contract on the project. Since the EPA refuses to guarantee that its project will not cause the city’s water and sewer systems to freeze, the city is prepared to seek a court injunction blocking the EPA from going ahead with work unless the agency comes up with a plan acceptable to the aldermen.

Gilpin County residents are cordially invited to a free tour of the Thomas House on Saturday, April 21, from 9 a.m. to 11 a.m. The house is located at 209 Eureka Street, Central City, just west of the county courthouse. The guides will be the present owners Darlene and Mike Leslie. The event is being held in conjunction with the Gilpin County Historical Society. The organization is pursuing purchase of the house through grants and donations. Everyone is welcome to preview the historic home.

Across the Crossroads, by A.F. Mayham: Uncle Ed has a friend who has been married five times. She dislikes men but she’s crazy about wedding cakes. And there was something about one of her boyfriends that she liked, but he spent it all. Must have been a congressman, and maybe congressmen are like the cutie who bought fancy underthings for a doctor’s examination… and then he only looked at her tongue. And that’s the way the public looks at congress and some other bureaus that handle the taxpayer’s dough. The unions seem to have quite a stranglehold on congress and the public should demand a thorough examination. In a recent report it was stated that the union’s contributions to a democratic election committee exceeded the entire amount contributed by all others. Warnings by newspapers and other information outlets seem to go unheeded, similar to one girl who said to her friend: “I’m warning you, he’s a wolf; he will rip the dress right off your back.” And the second girl remarked, “So I’ll wear an old dress.”

The infant daughter of Mr. and Mrs. Thomas Cryan (Sandra Lynn) was baptized by Rev. Larry Hawks at the Methodist Church last Sunday morning. Many relatives and friends were present for the ceremony.

Mrs. Joe Menegatti spent several days last week in Lakewood with her parents, Mr. and Mrs. George McLaughlin and, on her return, was agreeably surprised by a visit from her daughter and family from St. Louis.

Born: Mr. and Mrs. David Hoover of Golden are the parents of a son, Glen Allan, born April 14th, 1960. Mrs. Hoover is a granddaughter of Mrs. Elbert Lawry and a grandniece of Mr. Hugh Lawry.

Died: Death came suddenly to George W. Smith at his home in Black Hawk, Sunday morning, from a heart attack. He was 72 years of age, was born in Seattle, Washington, coming to Central City in 1952 after several years’ residence in Denver. He was a member of the Central City Police Department from 1954 to 1957 when he retired. He and Mrs. Smith had just returned from spending the winter in California and expected to make their home here for the summer. He is survived by his wife of Black Hawk, and one son, Robert T., of Denver; and two grandchildren. Funeral services were held from the Tomford Mortuary in Idaho Springs on Wednesday, with cremation later, and his ashes will be scattered on rocky ground near this city.

This spring season seems to be a good season for the pesky wood ticks, and a number who have been to the hills have had a jolly time picking them off upon their return. No one should neglect watching out for these poisonous pests, for if they become attached to one’s person long enough, spotted fever may result, and that is about fifty percent fatal. It is fine to go on a picnic and be in the open, but we should all be mindful of the tick season, which usually lasts until about June first.

Mr. A.B. Clark came up from Denver Saturday afternoon to spend Sunday with his wife and son, returning Sunday afternoon.

Attorney Leroy J. Williams, accompanied by his wife and daughters Jane and Virginia, came up from Denver Saturday evening to attend the funeral services held for Mr. Morris Hazard, Sunday afternoon, and to accompany the remains to Denver Monday morning.

Died: In Central City, Aprils 12th, 1930, Morris Hazard, aged 84 years. Mr. Hazard was able to attend his duties as Clerk of the District Court until a week prior to his death, and was at the courthouse during that week, but was feeling very weak, and going to his home, he was taken to his bed, from which he never left. Mr. Hazard came to Colorado from Buffalo, New York, in 1869, and located at Georgetown, and two years later came to Gilpin County, and settled in Russell Gulch, where he engaged in mining, which he followed for years. Moving to Central City, he was appointed clerk of the district court, which position he held for over 30 years, and up to the time of his death. He has no known relatives left here, as his brother, Horatio, already answered the summons about a year ago. The two were inseparable, were always together, and were known as the “twins.” He was a member of the Blue Lodge and Chapter, Order of Masons of Buffalo, New York, but met with the local lodges on many occasions. Funeral services were held at the Masonic Lodge room on Sunday afternoon, the services being conducted by Hugh L. Lawry. Monday morning the remains were taken to the Crown Hill Cemetery, Denver, where Masonic services were conducted by Past Master Rae L. Laird, interment following by the side of his wife and brother.

One of the heaviest snow storms within the recollection of the oldest inhabitants of the county struck Gilpin County and the mountain regions, starting Saturday, and continued for 40 hours, leaving 3 feet of snow on the level, and from 5 to 8 feet in the higher ranges. Many mines were compelled to close down, as well as most of the mills, as it was impossible for men to come to work, or teams to haul ore to the mills. The Sunday morning passenger train from Denver reached here at 5 o’clock in the evening, and no other train arrived in Central until Wednesday evening. The Black Crook Company, which was billed to show at the opera house Sunday evening, arrived on the belated train, but the managers were afraid they would be snowed in here, and cancelled their date and returned to Denver that evening. They have a big house booked for Pueblo and Colorado Springs, but were evidently in bad luck, as they were snow bound for two days at Palmer Lake.

Sheriff Thomas Cody left Friday with Miss Ella Hallinan, who was adjudged insane last week, and who has been placed in the insane asylum at Pueblo. Miss Mary Hallinan, a sister of the unfortunate woman, accompanied her to the asylum.

Gus Lundell, who resides on Casey Avenue, fell 30 feet in the East Centennial Mine, in Case Gulch, last week, and received a bad cut on the back of his head.

At the Fisk Mine, the regular working force has been increased to 50 men on two shifts, and about 40 tons of milling ore is being taken out daily from the 11th and 12th levels, besides about two tons of smelting ore, both grades carrying good values.

Mr. Darius Pippin fell down a shaft on the Belden Lode, in Chase Gulch, the first of the week, and was bruised up considerably.

A fair and festival was given at Turner Hall on Tuesday and Wednesday evenings by St. Paul’s Church for the benefit of the parish school. The gross receipts were $560.

William Lewis has leased his partner’s interest in their joint stamp mill on Quartz Hill, and was preparing to start up as soon as water could be obtained from the Consolidated Ditch, which brought water from James Peak.

Nathaniel Young and family arrived from the East.

Mr. A.H. Harker, a former mayor of the city, arrived from the White Pine country on Thursday.

John Day had returned from the East, accompanied by his daughter.

END_OF_DOCUMENT_TOKEN_TO_BE_REPLACED

Where the dead get to tell their story By Jaclyn Schrock On Saturday, August 21, the Gilpin Historical Society held their annual Cemetery Crawl. Tickets allowed the shuttle of hundreds of guests from the Teller House parking lot to the Cemetery. Depending on v... END_OF_DOCUMENT_TOKEN_TO_BE_REPLACED