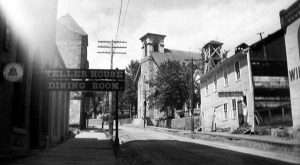 A suspect in the deliberately set Gilpin Hotel fire has been identified and the evidence is under review by District Attorney Don Mielke’s office to determine if there is enough evidence to prosecute, said Investigator Mark Russell on Monday. Although all the evidence collected so far is circumstantial, Russell said, he hopes there is enough to file charges. Additional information would be helpful, he added, and asked that anyone who might know something about the fire report it. Informants will remain anonymous, Russell said, and can call him at the JeffCo Arson Investigation Office, the Gilpin County Sheriff’s Office, Crimestoppers, or the Arson Hotline. Both Crimestoppers and the Arson Hotline offer rewards for information leading to a conviction.

Ed Zuvich is no stranger to Central City. A native of north Denver, he used to ride his “scoot” up to Central City during the 1960s. He worked in downtown Central City at the Gilded Garter, Glory Hole, and even at the Belvidere Theatre a time or two during the 1980s. For the last six years, he has lived in Grand County, where he worked as a real estate broker and developer, loan officer, and restaurateur specializing in Mexican food and pizza. Now, Zuvich is back at the Belvidere, managing the property for Jay Williams, who recently bought the long-dormant Armory Building that also houses the Shoo Fly Bar, and until recently, the Central City Story exhibit. Remodeling work has begun, and plans have been formed, although they are preliminary and may change over the next few months. The Shoo Fly and the Belvidere, both of which are in the upstairs of the theater, will not be changed much physically. The bars have been moved to provide better traffic flow, a full-service bar will be added to the Belvidere, the balcony will be remodeled, and the outdoor deck will be enlarged. The two establishments will be separated by rolling doors when needed. More dramatic changes are planned for the first floor. Efforts to obtain the Central City Story dioramas from Hank Gentsch were unsuccessful and the exhibits were sold to the National Mining Museum at Leadville. Zuvich plans to take out the partitions in the museum and install French doors and arches. He would like to see five to seven groups of artisans working to produce different pieces—blown glass, earrings, and sketches are a few ideas. Visitors to the shopping arcade could view the production process and buy the items that catch their fancy.

Across the Crossroads, by A.F. Mayham: Lately, the churches have been involved in an argument regarding infiltration of communism sitting in the pews. The ministers striving for an Eldorado condition in Christianity seem perturbed over the insinuation. News hawkers get wind of the business and make a mountain out of a mole hill. Searching of the soul, if such a thing exists, is taught by most all religious circles. Often the intellectual arteries become prematurely hardened and the ministers endeavor to restore them to a normal way of functioning. Belief is more or less a personal attribute and does no harm as long as one believes in something, while that something is something they don’t know anything about.

Mrs. May Cassidy entertained her sister and husband, Mr. and Mrs. A. L. Ball of Phelps, Wisconsin, last week. Mrs. Frank Daugherty took them to Boulder on Sunday, where they were guests of Mr. and Mrs. Fred Thomas.

The streets and ditches in the downtown area have been cleaned and washed out of the ice and debris which had accumulated during the winter. The work is being done by Water and Street Commissioner Joe Menegatti, with the help of George Lambert and Roy Mumford, and also Bill Axton, who contributed his herculean help in removing the sand from the gutters. The hundreds of visitors which came here yesterday afternoon with the Hilton group surveyed clean streets and gutters which were almost like a scene from a pastoral. They apparently enjoyed themselves while in our city.

Two teenage boys were apprehended by Sheriff Tom Collins in the tunnel below the old Iron City Mill, Sunday afternoon. They had forced their way into the small blacksmith shop at the mouth of the tunnel and had gone back into the tunnel some 1,000 feet, and as they explained: “were looking for gold.” They were brought to Central for a hearing before Justice of the Peace Lee Lyttle, who turned them over to the County Court for a trial. The Sheriff is becoming quite petulant when he is called to investigate a robbery or break-in, particularly to summer cabins in the Beaver District, and after spending from a day to several weeks in investigation, the owners refuse to sign a complaint. He says it is becoming quite monotonous.

Mrs. Thurman Leach left Saturday for Albuquerque, New Mexico, where she will visit her sister and brother-in-law.

Mr. and Mrs. Judd Kriley of Canyon City were Sunday and Monday visitors at the Otto M. Blakes.

Fred Mattivi and Ed. Hermanson have put a coat of green paint on the new steps between Church and High Streets. The stairway looks very nice and is an appreciated convenience to those who live on High Street.

George Kent, who has been operating the Meeker Mine, left for his home at Boulder, on Saturday,

Mrs. Bosanko, who had been visiting the Moyle family, has returned to her home at Boulder.

How to Make Consommé Royal, by Nellie Maxwell: Beat two eggs, add salt and one half cupful of milk. Pour into a square, shallow pan and cook over hot water until the custard is firm. Cool, then cut into squares and serve in hot consommé.

Last Saturday was the birthday of Miss Myrtle Mitchell of this city, and her schoolmates gave her a surprise party in the afternoon, and all had an enjoyable time. Those present were Ethel Champion, Jesse and Laura Rule, Pearl Thomas, Hazel Tabb, Jesse Mitchell, Nellie Anderson, and Masters Clarence Hansen, Frank Warren, Joseph Hicks, and Arthur Mitchell.

Mr. Bertie Gilbert had taken a position with J.W. Barker, the jeweler.

Mrs. Allen, of Black Hawk, who was shot by her husband, was removed to Denver, where x-rays will be made, to ascertain whether anything can be done for her weakened condition. Mr. Allen, who was operated on a few days ago, is reported as rapidly convalescing from his self-inflicted wound.

The ore shipments from the Black Hawk Station for the month of March totaled 249 carloads, or 4,620 tons. These figures show a decrease of only 200 tons for the same month of last year, with a number of the big mines closed for the present, while making improvements.

Died: Jordan E. Rockwell, an attorney from Denver and well known in this city, died at Los Angeles, California, on Wednesday last. Mr. Rockwell was married in this city to Miss Lucia Hallett, and practiced law here in the early 70s, later moving to Aspen and then to Denver. He was 51 years of age and left a wife and son.

The proprietors of the Gilpin County Tunnel proposed to pay their employees in silver coin in the future.

Mr. Enos Loughran was seriously injured by a falling scale of rock in No. 7 shaft on the Gregory Mine.

A gold retort weighing 407 ounces, and having a currency value of $7,500, the product of the Briggs Mine for the month of March, was left at Warren Hussey’s bank. The smelting ore for the month was sufficient to pay all of the expenses of the mine for the month, leaving the above amount pure velvet.

Halsey M. Rhodes, of Golden, was considerably bruised by a fall in a coal mine near that place.

Robert O. Old and wife, of Georgetown, have returned from England, making the trip in 15 traveling days. He had engineered a deal with English capitalists for the sale of the Terrible Silver Mine at Georgetown, the purchase price being $500,000.

END_OF_DOCUMENT_TOKEN_TO_BE_REPLACED

Benefitting the county, schools, and much more By Don Ireland   This year marks the 30th anniversary of casinos opening in the former little mining towns of Black Hawk, Central City and Cripple Creek, Colorado. In those early years, smoking was allowed inside ... END_OF_DOCUMENT_TOKEN_TO_BE_REPLACED

Where the dead get to tell their story By Jaclyn Schrock On Saturday, August 21, the Gilpin Historical Society held their annual Cemetery Crawl. Tickets allowed the shuttle of hundreds of guests from the Teller House parking lot to the Cemetery. Depending on v... END_OF_DOCUMENT_TOKEN_TO_BE_REPLACED