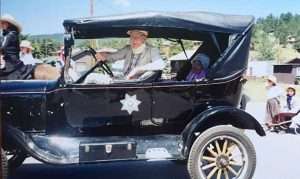 Shelby Hayes was chosen recently as a member of the All-District Basketball Team. Hayes, a junior, is the first girl from Gilpin County School ever to be named to the Division 2, Class 1A district team. Coach Peggy Miller explained that Hayes was voted in by team coaches for her consistent performance on the court. Hayes plays the baseline position, and plans to attend college after graduation. She hopes to become an occupational therapist.

Letters to the Editor

Dear Editor: I am writing this letter regarding the Register-Call’s lawsuit against the Gilpin County Advocate. Frankly, after reading the formal complaint and the excerpts that were supposedly “copied” from the Call, I am of the belief that the lawsuit that was filed with the Federal District Court is without any basis. It seems that most of the material was supposedly copied are either direct quotes ore analyses of those quotes. Other papers’ articles on the same matter are almost invariably nearly identical due to journalistic standards. One hopes that, through good reporting, such materials would be quite similar. What really appears to be going on, in my opinion, is the fear of one paper, the Register-Call, that the other paper, the Advocate, would provide competition and pick up the public legal notices. From a taxpayer’s point of view, I would think Gilpin County residents would appreciate having the lowest, qualified price for the notices so as to save tax dollars. The lawsuit should be dropped. Let the chips fall where they may in the competition for the legal notices and among the newspapers. I hope your paper has the ethics and courage to print this letter. Sincerely, David Clyne of Nederland.

It is not our intent to try this case in the paper; that’s the job of the court. A copy of the complaint, along with the evidence in the case, is on file at the Register-Call. Anyone interested in reviewing it is welcome to do so Monday through Friday, after 9 a.m., Thursdays excluded.

Joanne Grapes is recuperating at home after a trip to the hospital last week. Joanne just got carried away with her snow shovel after the big storm and now has to take it easy for a while. Cheer up Joanne. It could be worse; the doctor could have ordered more exercise!

David Reynolds and Lori Manweiler have announced their engagement. Manweiler is the daughter of Gene and Ruthann Hofferber of Dory Lakes. Reynolds is the son of Gilbert and Nancy Reynolds of Flagler, Colorado. Both Manweiler and Reynolds are in banking in the Denver area. A fall wedding is planned, and the couple will reside in Aurora.

Across the Crossroads, by A.F. Mayham: St. Patrick certainly was the recipient of his share of attention last week. He was lauded on TV shows, in the newspapers, and banks, where most of the money handled was green. Green neckties, vests, skirts, socks, panties, scarfs and numerous other articles all paid tribute to St. Pat and the snakes. Restaurants served Mulligan’s Irish stew, corn beef, and cabbage from Cork, Dublin roast lamb with green mint sauce, Irish potatoes, Mrs. Murphy’s biscuits, green beans from Donnegal, Shamrock coffee, green deserts in harp shapes topped with slices of orange. No fights were recorded between the orange and the green. In days gone by when parades were in vogue, they sometimes ended down in Larimer Street with a free for all. After getting rid of the snakes in the Emerald Isle, Pat must have taken refuge in Washington as all the folding money now is green. The “yellow backs” redeemable in gold have disappeared long since. And there is a chance for the Orangemen; get the gold certificates back in circulation.

The County Spelling Contest is being held this Friday at the Clark School. The winner of the oral contest will compete in the state contest in Denver. Winners of the written and oral tests will be announced next week.

Clifford Parsons was in Denver Tuesday to see his doctor.

Mr. Hugh Lawry has been ill with the flu since last Thursday, but is now recuperating nicely.

Postmaster Max Robb announces that, if you did not receive your Advance Census Report in the mail, that plenty are available at the post office, and are yours for the asking.

Mr. Ralph Calabrese was in Denver Tuesday having some dental work done.

Charles A. Nast, the photographer of Denver, was up Monday to attend the celebration and doings of the Elks’ Lodge that evening. Mr. Nast was in Central during 1877, and several years following worked for Charles Weitfle, the photographer here, who succeeded Joseph Collier in that same line of business. Mr. Weitfle did a good business in taking steroptican views of Central and vicinity, which he shipped all over the country. Mr. Nast left Central in 1879, going to the Black Hills country, and then later back to Denver, where he has been established for years, and is one of the best photographers in the state.

Halsey M. Rhoads, the pioneer editor and publisher of Colorado, came up from Denver Monday as a guest of Central City Lodge Order of Elks, at their banquet and celebration held that evening. Mr. Rhoads was one of the officers of the Elks lodge of Denver who came up just thirty years ago to install Central City lodge. He returned to Denver Tuesday morning.

Harry Willis was taken to St. Luke’s Hospital, Denver, Sunday, and operated on for several bodily complaints, and reports received here on Tuesday were that he was in a serious condition. Later reports are that he is getting along nicely.

Died: Mrs. Ed. Theid left about the first of the month for St. Louis, Mo., summoned by the serious illness of her father, and a couple of days after her arrival she was taken ill and died on March 14th, 1930, at the age of 45 years, interment in Iron Mountain, Missouri. She underwent an operation recently, and it is supposed the trip was too great for her system to overcome, which led to her illness and death. She is survived by her husband, four children, residing here, and relatives in Missouri.

Alderman Frank Rule went to Denver Saturday afternoon, and was a spectator at the coursing match held there the following afternoon.

Frank Terrill and Thomas Mitchell left on Friday for Golden, for a few days’ visit with friends.

James Angove, John Mills, John Berryman and R. Barnett left on Tuesday morning for Cornwall, England. Mr. Angove is going on a visit to England after an absence of nearly 30 years, 23 of which he has lived in Gilpin County, and will visit the scenes of his childhood for the next three or four months before returning home. The rest of the party will visit among their relatives and friends, expecting to leave during the summer months for South Africa.

Lew Humphreys returned Saturday from a visit to lower California and the Grand Canyon of the Colorado, where he had been examining mines for eastern capitalists. In a letter awaiting him here, he received the bad news of the death of his mother, Hannah Humphreys, at Swanson, South Wales, on February 24, at the advanced age of 76 years.

The East Whiting Mine on Gunnell Hill was sold at a sheriff’s sale on Tuesday, and was bid on by Alvin Marsh, representing W.J. Barker, of Denver, $9,137.35 being the amount of the principal and costs.

Five teams are employed in hauling ore from the Crown Point and Virginia Mines, at the head of Virginia Canyon to the Wilkie Mill at Idaho Springs, and the daily shipments average 50 tons. The ore is coming from the 3rd, 4th, and 5th levels, where work is being carried on with a working force of 35 men. Manager Knowles has placed an order for a new hoister to replace the one now in use, with a capacity of 100 horsepower.

Samuel H. Bradley announced himself as a candidate for the office of police judge in Black Hawk, at the coming city election.

Chairman L. C. Rockwell issued a call for a mass convention of the Republicans of the city at Washington Hall, on Monday, March 28.

The Golden Transcript was urging the location of the School of Mines at Golden.

Nineteen tons of ore from the Gilpin Tunnel yielded $2,300 in coin, and the reporter said it was the best and cleanest bullion yet seen from any amalgamation plant in Colorado.

Three tons of ore taken from Number Six, east on the Seaton Lode, assayed two hundred- and seventy-ounces silver to the ton, and was sold for $265 per ton in currency to Hills’ smelter, in Black Hawk.

Several thousand dollars in silver was received by the banks and business houses from Denver, designated to take the place of the fractional currency in use.

END_OF_DOCUMENT_TOKEN_TO_BE_REPLACED

Benefitting the county, schools, and much more By Don Ireland   This year marks the 30th anniversary of casinos opening in the former little mining towns of Black Hawk, Central City and Cripple Creek, Colorado. In those early years, smoking was allowed inside ... END_OF_DOCUMENT_TOKEN_TO_BE_REPLACED

Benefitting the county, schools, and much more By Don Ireland   This year marks the 30th anniversary of casinos opening in the former little mining towns of Black Hawk, Central City and Cripple Creek, Colorado. In those early years, smoking was allowed inside ... END_OF_DOCUMENT_TOKEN_TO_BE_REPLACED