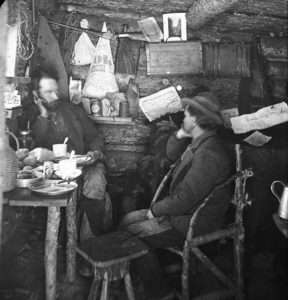 When do one person’s rights have precedence over another’s? That question was the source of a heated debate that erupted between the Gilpin County Commissioners on Tuesday. Acting on the request of two non-smoking courthouse employees, Commissioner Ann Leffingwell made a motion that smoking be banned from the first floor of the courthouse. The motion was seconded by Commissioner Carroll Beck, resulting in a 2-1 vote in favor of the ban. Chairman Leslie Williams voted against it. Williams chided the employees for speaking only with the two non-smoking commissioners on the subject. She also pointed out that they chose their course of action without input from any of the smoking courthouse employees. Rose Hosmer informed Williams that she had been aware that employees wanted a stricter smoking policy at the courthouse and the commissioners had to date refused to set a policy. At this point, Williams, who was visibly upset, called for adjournment of the day’s meeting. The meeting was adjourned. Williams informed Leffingwell and Beck that for the past two weeks, she had assumed the role of administrative assistant since the resignation of Lorraine Crowe. Neither one had offered to help and now they expected her to quit smoking in the area where she has been working, she said. Leffingwell darted back that by definition of chairman pro tem, which she is, she is only required to fill in when Williams is absent at meetings. If she were vice-chair, she said, it would be a different matter altogether She would then come in to help staff that position until someone is hired. Half an hour’s worth of verbal barbs and retaliation were hurled back and forth. County Clerk and Recorder Judy Dornbrock entered innocently into the melee to question why the action was taken. She had not been informed that a smoking ban was to be discussed at the Tuesday meeting, let alone that a non-smoking decision would be made at the courthouse. Leffingwell proceeded to tell Dornbrock that employee input was not necessary, that the matter was brought before the commissioners and was enacted. The board of commissioners, according to her, has that right. Finally, Beck requested a truce by stating that the matter should be given more consideration. The meeting was reconvened, and the motion rescinded on the first-floor smoking ban. Williams and Beck voted to continue the smoking ban discussion and decision to the mid-month meeting of March 20. Leffingwell abstained from the vote. Williams asked for all smokers to voluntarily refrain from smoking on the first floor until the March 20 meeting.

Died: Jonathan Anthony Jordan, a resident of Gilpin County for eight years, died at the family’s condominium in Grand Lake, February 28th, 1990. He was 42 years old. Born May 8, 1947, in Iowa City, Iowa, Jon was the son of William Sandoe Jordan and Mary Elizabeth Quarton Jordan. He was reared in Cedar Rapids, Iowa, later attending the ninth through twelfth grades in Fountain Valley at Colorado Springs. He attended Northwestern University in Chicago, Illinois, for one year, transferring to Colorado University in Boulder, where he obtained his bachelor’s degree in political science. Following his graduation, he served in the Army for 19 months and was stationed in Korea. He returned to Colorado University after military service and earned a master’s degree in finance. Professionally, Jon was a certified public accountant. In 1967, Margie and Jon were married in Deer Trail, Colorado. In the following years they became proud parents of Jennifer and Brook, as well as being guardians of Cindy. Before moving to Gilpin County, the Jordans resided in Boulder. Approximately five years ago, they purchased a condominium in Grand Lake. In 1983, Jon was elected by the voters of Gilpin to serve on the Gilpin County Re-1 School Board. During his four-year term on the board, Jon served as both assistant treasurer and treasurer, and as a member of the Special Education Advisory Committee. He had a strong interest in the quality of education provided at the school and felt Re-1 was one of the best schools in the state. Jon’s confidence in the school led him toward seeking two $25,000 gifts to the school from private individuals, and in 1986 allowed the school to receive a 77-passenger school bus as a gift from another individual. In more recent years, Jon became active in and strongly supported the Academic Decathlon program at Gilpin Re-1. Family and close friends knew Jon as a quiet but generous man. He loved Gilpin’s aspen trees and the outdoors, including boating and snowmobiling. One of his favorite pastimes was debating many various issues. Jon parents preceded him in death. Survivors include his wife, Margie of Gilpin County; children Jennifer, Brook and Cindy; and brothers Sandoe, Christopher and Jeffrey Jordan, all of Boulder. A memorial service was held March 5, at Drinkwine Chapel in Littleton. Officiating were Mr. Sutherland Cook, lifelong family friend, and Dr. Donald Bennallack, a close friend of Jon’s. Background music at the service included many of Jon’s favorite songs.

Across the Crossroads, by A.F. Mayham: The public is going to be subjected to a lot of political hooey during the next few months, and a lot of consideration will necessarily have to be given to the pros and cons of the air burdened with horse feathers and matching funds. There’s no such thing as matching funds—it all comes out of the taxpayer’s pocket. You are just paying some bureau to take it out of one pocket and put it in the other pocket when you could just as well do it and save the handling fee of the bureau. “What fools mortals be?” Birds and animals get along fairly well without matching funds because what they want, they do for themselves. The hummingbird, fastest thing on wings, can fly frontward and backward, sideways and stay suspended in the air without government help, and the bee with his belly full of honey and a stinger on his rear, asks no quarter. The swallow, several species, most beloved bird and one that likes the company of man, seeks no help, just companionship of humans. The purple martin, same species, will take up a home in a man-built cote and be satisfied with a crop full of mosquitos which he catches without any matching funds. Some folks bellyache about the national highway being stymied for the time being, for lack of funds. Congress didn’t appropriate enough of your money to go through with the deal. Maybe they saw other uses for your dough. Kick because Congress spends too much and then kick because they didn’t spend more of our money in doing something that some politician of the opposite party thought they should do with “matching funds.” There isn’t any such bird, except you.

Patsy McNevins left for Denver Thursday of last week, to attend the funeral of his niece, the daughter of Dan Lynch.

Mr. A. M. Fairchild retuned from a trip to Denver on Saturday, where he attended to business matters and received medical treatment.

Herman Schoenherr left for Denver Tuesday, on a short vacation and to visit with friends.

The card party which was advertised to be given on Saturday evening by Neighbors of Woodcraft, has been postponed until Wednesday evening, March 19.

A carload of high grade concentrates from the mill of the Chain O’Mines Company at Central, was being loaded at the depot, for shipment to the smelters at Leadville, for treatment.

Fred McLaughlin took his father, William McLaughlin, to St. Anthony’s Hospital, Denver, where he will receive care and attention which could not be given him here.

Mr. and Mrs. A. Rachofsky announce the engagement of their daughter, Dora, to Max Meyer, of Boulder, Colorado.

The Fiske Mine, on Gregory Mountain, is shipping 60 tons of milling ore daily, and Mine Foreman John Curry says that, by the first of the month, the shipments will be in the neighborhood of 100 tons daily. Work is confined entirely to the east and west bottom, or 12th level, and the ore bodies are showing up fine. The water is being drained out of the mine through the bottom levels into the Bobtail workings, thence passing into the Gregory incline, where it is easily handled by the big pumps in the incline. Some ice smelting ore is being saved daily for shipment in car lots, which carries values of between $150 and $200 per ton, and the mill ore is returning 3 ounces gold to the cord, with good values in the tailings or concentrates.

Born: In Nevadaville, March 7th, 1900, to the wife of William Roberts, a daughter.

A mine in Lake Gulch, owned by a Mr. McKinney, and being worked by two Englishmen, was reported as producing ore that was returning 40 ounces gold to the cord in the stamp mill.

Messrs. Powell, Greenlee, and Applebury were working a recently discovered lode on the hill between the forks of Prosser and Eureka Gulches that was returning from 6 to 8 ounces gold to the cord.

The thermometer at Orehood’s Drug Store indicated 18 degrees below zero on the morning of the 14th.

Ed. Moore was taking out milling ore from the tunnel of the Bates Lode that was giving 12 ounces gold to the cord.

Mr. B.T. Wells, agent of the Smith & Parmalee Company, had returned from the East, accompanied by his wife.

Georgetown had organized a fire company, and had received their engine, hose, and other equipment. Editor Collier, of the Register, said that Central City had no use for an engine, as there was not enough water in town to do a week’s washing.

Died: The six-year-old son of William Hambly was drowned by falling into a shaft on the Davenport Lode. The little fellow had been playing hoisting water with a tin can and string, and had fallen into the shaft, and was not found until two days later.