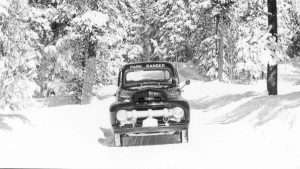 Mary P. Kreutzer, director of Jeffco Employment and Training Services, praised the program and its results in Gilpin County before the Gilpin County Commissioners on Monday. She especially complimented Susie Lala, director of Social Services. Kreutzer pointed out that the employment service is available to all county residents, including notonly those who have lost jobs, but also those who need to develop job skills. Gilpin residents are reminded that next week the Job Search program, along with the food stamp office, will be moving to a new location. They both will be located in the Clear Creek County Highway Department building at Dumont. Hugh Blevins, director of Colorado Small Business Development Center at Red Rocks Community College also addressed the commissioners. Counseling assistance is offered by Blevins for those who are interested in establishing a small business as well as businessmen who are having problems in established businesses. Topics include cash flow, business plans and development, and where an individual may seek funding. Ruth Ann Anderle was appointed by the commissioners to represent Gilpin County on the Private Industry Council.

The Laras—all of them—are in college. Cindy is maintaining an “A” average in nursing classes, according to husband Randy, who is working in a psychology degree. His son Brandon isn’t far behind Cindy on the grade-point scale. No word on Randy’s grades.

Born: Michelle and Kevin Armbright are the proud parents of a son, Ryan Kevin, born February 18th, 1990, at 4 a.m., at Humana Hospital in Thornton. Ryan weighed in at 7 pounds, 10 ounces, and joins his sister Kayla Renee at the family’s Central City home. Paternal grandparents Phyllis Armbright and Paul Armbright live in Peoria, Illinois. Maternal grandparents are Dee Jones of Black Hawk, and Robert Jones of Springfield, Oregon. Ryan was lucky to have been born in the hospital instead of the car; mom made it there in the nick of time!

Goodbye, Old Friend… Last Friday I lost a good old friend. It’s hard to explain the pain—the part of me that is so empty. You see, my friend and I were together for 24 years! Gentle, warm and loving was my friend—from early morning to late at night—always there by the fireplace. A devoted Broncos fan was he—lying on the arm of the chair ‘til the game was over. In spring and summer, the big south porch was his domain, surveying the beauty and view from atop the handrail, for you see, this dream was built for him as well. When I would arrive home late at night, he would greet me with warm, kind words—a dish of warm milk his reward. He lived a warm, wonderful life—my friend—outliving eight dogs, six cats, many other animals. Finally, his time ran out. He laid down by his beloved fireplace for his last sleep. I miss him so, as do his brothers and sisters. Good bless this bighearted guy, for he knew only love. We miss you, TABU. Signed, Mountain Man, Animal Man, Russell Gulch.

Across the Crossroads, by A.F. Mayham: The Candlemas Day predictions which seem to fit weather conditions in the east better than the west, have been shot to pieces and, if the bear and ground hog stayed out thinking winter was over, they must have come out at the wrong time, forgetting this was leap year and a presidential election was in the offing. Maybe the animals’ I.Q. was off or on the minus side. In nature the stupidest animals are the most dangerous, and that is why winter lingers on. The bear went back when he should have stayed out. His I.Q. failed. To avoid criticism: say nothing, be nothing.

The County Spelling Contest will be held at Clark Grade School, March 25th. The written one will be in the morning with the oral spelling down after lunch. The public is invited to that. Cash prizes are given by the V.F.W.

Mr. and Mrs. George Springer returned last Friday from a trip to California. They report a good time.

There is so little happening here the past few weeks that the only topic of conversation is about the inclement weather. We have mentioned that topic numerous times until it becomes monotonous, so this week we will explain in abbreviated form and say—”the weather in Central City and adjoining locale is in a helluva condition.” It is permissible for Ye Olde Editor to treat the truth carelessly, but we had more faith in the groundhog in his prognostications. Anyway, March came in like a lion, and from present indications, will go out the same way.

Wm. Floyd, employee of the State Highway Department, has been transferred to the Golden area.

Mr. and Mrs. M.K. Peterson were in Idaho Springs last Friday evening, guests of the Twelve High Club at a covered dish supper and social event.

Mr. and Mrs. Earl Quiller were hosts at a card party last Saturday night, at which twelve guests enjoyed games of pinochle. Warren Smith of Nederland was winner of high score.

Mr. and Mrs. Ralph Swearingen were in town Sunday and called at the Melvin Blakes.

The snowstorm of Monday afternoon and night left on the mountainsides nearly a foot of the white mantel, which is fast disappearing under the bright sunshine.

Misses Irene Gibbons and Julia Stapleton left for Denver Sunday morning, on a short outing, returning during the evening. Mrs. Niccum accompanied them on the trip.

Miss Nina Shaffer, who had been attending to business and shopping in Denver, returned home Friday evening.

The Stroehle Manufacturing Company is building an ore bucket for the Mattie Mine, at Idaho Springs, which is the largest piece of machinery of that kind that the plant has turned out in over twenty years.

The Ute Mining Company, operating the Pittsburg Mine in Lake District, is loading another car of smelting ore for shipment to the Leadville smelters for treatment.

The Chain O’ Mines Company, in Central, is loading a car of high grade concentrates for shipment to the Leadville smelters.

Miss Edna Becker is spending a few weeks in Denver, the guest of Miss Edna Whittaker.

Judge Flor Ashbaugh, who has been confined in the Hawley block on account of an attack of chickenpox, is now able to be out and attending to his duties.

Thomas H. Potter returned Monday from a business visit to New York and other eastern cities.

Postmaster C.A. Wagner, of Russell Gulch, has ordered some new post office boxes and promises to make his office look first class in every respect.

Ernest Paoli, a miner working in the Wautaguua Mine in Russell District, was badly injured Thursday morning, by a blast which caught him before he could get away from the shots.

Died: Fred Currier, a traveling piano player, died suddenly Saturday afternoon in Lou Bunch’s house on Pine Street, his death being caused by an overindulgence of alcohol, morphine, and opium.

A man working in a mine on Bobtail Hill was quite severely injured Wednesday by a scale falling from the side of a drift. This was his first experience in mining, and he told the man working with him that if they did not stop throwing rocks at him, he would quit work.

Jerome B. Chaffe & Company were advertised as the agents in Central City and Georgetown for the new stage line of John Hughes & Company, who were the successors of Wells Fargo & Company stage line.

The Guy House, on Guy Hill, was advertised as the best hotel between Central City and Denver.

Tuesday morning’s paper had an account of finding of three gunny sacks in the Bates Mine, by parties who were examining the mine with a view of taking a lease. The sacks were taken to the surface and, on being opened, showed they contained the remains of a negro, supposed to have been the late George Smith, who after being hanged, was buried by the county. Some doctors had seen the body and, after dissecting it, had dumped it down the mine.

The new school house in Black Hawk was opened for the first time on Monday, and the paper spoke of it as being the best school building in Colorado, if not in the west.

Weston & Webber received a new hearse, trimmed with silver, glass and feathers, and the editor suggested that someone should die, just for the pleasure of riding in the new concern.

END_OF_DOCUMENT_TOKEN_TO_BE_REPLACED

Benefitting the county, schools, and much more By Don Ireland   This year marks the 30th anniversary of casinos opening in the former little mining towns of Black Hawk, Central City and Cripple Creek, Colorado. In those early years, smoking was allowed inside ... END_OF_DOCUMENT_TOKEN_TO_BE_REPLACED