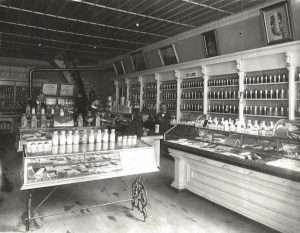 A fire at the National Mine, located immediately above Central City on the way to Russell Gulch, drew firefighters from three area departments. About 20 firefighters were on the scene from Central City, Black Hawk, and High County fire departments. Only Colorado Sierra did not respond to the scene, said Central City Fire Chief Gary Allen, in order that the department could be free to respond in case firefighters were needed somewhere else in the county. The Gilpin County Sheriff’s dispatcher received a fire call at 10:19 a.m. Jeff Moerbe, caretaker of the National Mine, placed the call, and said later that when he left the building that morning, only a few coals smoldered in the stove. The fire started in the wood stove’s pipe, according to Allen. Flames engulfed the north end of the shop building, which included an office and living quarters. Located north of the shaft house, the shop held maintenance supplies, including propane and acetylene equipment. An estimated 400 to 500 square feet of the building sustained damage, Allen said, adding that the affected portion of the structure could be rebuilt. The fire was out and mop-up operations underway shortly after noon.

A group of ice skaters—employees of AT&T’s Lakewood office—spent last Saturday skating on the pond at Black Hawk’s town park. “It went wonderfully,” said Pat Taylor, a group member who also happens to live in Gilpin County. Taylor convinced her friends, who call their group “Taking a Look at Colorado,” to make this month’s trip to her neck of the woods. Their monthly trips include a wide variety of activities in different parts of the state. “We had a great time,” said Taylor, adding that she would like to see the group visit Gilpin County more frequently. The town’s aldermen are delighted that the park is being used, and invite the public to use the facilities. They warn, however, that the city does not maintain insurance on the park, and skaters do so at their own risk.

Well, the wedding fever has hit Gilpin County School (staff only!) hard. Not only is Gracie Foster planning on tying the knot, so are Debbbie Fahrni, Kelle Lake, and the latest addition is Minnnie Engleson. Previous mention has been made in these pages of the Fahrni and Lake wedding plans, but word of Minnie’s impending nuptials just reached the ears of our snooping reporters. Minnie will be married in Crested Butte on July 21, although we can’t tell you to whom. More on this later.

Derek Leslie, a Gilpin High senior, placed second in the 126-200 cc motorcycle ice racing state championships at Rainbow Falls, west of Colorado Springs. Riding his 200 cc Yamaha, which he set up, Derek rode to three solid second place finishes in the three motos. This was his first season of reason of racing and was against expert class riders.

Upset with the nasty weather this week? We know where you can direct your complaints about the sudden chill in the air. Reporter Charlotte Taylor swears that whenever her parents, Clyde and Imogene Taylor, arrive from Phoenix, the weather takes a turn for the worse. Naturally, they arrived Tuesday morning. Expect a return to balmy temperatures Wednesday or Thursday.

Died: Marjorie B. Sonnleitner, a resident of Central City, died at Chateau des Mons Nursing Home in Englewood, on February 11, at the age of 77. She was born in St. Paul, Nebraska, and later was the court clerk in Gilpin County. Marjorie was preceded in death by her husband Roy J. Sonnleitner who died December 2, 1989. Graveside services were held yesterday. February 15, 1990, at Bald Mountain Cemetery in Central City, Father Francis Deml officiating. Funeral arrangements were made by Woods Mortuary in Golden.

Died: Penny June Miner died at Lutheran Medical Center in Wheat Ridge on Sunday, February 11, 1990. She was 41 years old. She was the wife of Zane Miner, who teaches math and physics at Gilpin County School and also coaches wrestling and football. School was dismissed at 3 p.m. Thursday in order for staff and students to attend the afternoon funeral service. Born December 15, 1948, in Lewiston, Idaho, to Pat and Joyce Sheldon Harlow, Penny was reared in San Jose, California. She attended college at San Jose State University, taking technical courses. For several years she was employed by IBM, where she built computers. She later moved to Henderson, Nevada, and became a licensed realtor. In June of 1979 Penny and Zane Miner were married at a chapel in Las Vegas, Nevada. In 1989, the couple moved to Golden. Penny was attending real estate school to obtain a Colorado realtor’s license, and planned to work for Golden West Realty. Penny had many varied interests, among which were crafts and dancing. Her favorite pastime, however, was fishing. In addition to her husband, she is survived by her parents; two brothers, Pat and Mike Harlow, of Sacramento, CA; and her children, Debbie of Klamath, CA, Julie and Matthew of Las Vegas, NV, and Scott of Denton, TX. Services were held at Woods Chapel in Golden on Thursday, February 15, after cremation.

Across the Crossroads, by A.F. Mayham: Barbershop quartets, it is rumored, occupy a front seat near the pearly gates. And that is as it should be for they produce harmony, something that nations and even municipalities are unable to perform of acquire. Three quartets entertained at the Lions Club meeting in the Albany Hotel Tuesday noon, and harmonized to perfection. Sweet Adaline isn’t sung anymore, that is in the regular repertoire, and Home on the Range, although like The Red River Valley lend harmony, is a little passé. But Home Sweet Home can be jazzed up, along with Moonlight and Roses, He’ll Have to Go, You’ll Return to Me, and My Heart Belongs to Daddy. The Last Rose of Summer, Rigoletto, and Aida are under advisement, as is Whispering Hope. Alma Gluck and Louise Homer used to tear off Whispering Hope to perfection in a wonderful duet. It would require professional talent to equal those two gals—both Metropolitan Opera stars, now singing in St Peter’s domain, where nothing but harmony prevails. Barbershop quartets also have an “in” with Peter, but the Lion’s status is problematical.

Twelve to sixteen degrees below zero Wednesday morning, with about four inches of snow on the ground. The ground hog has misrepresented the truth, but anyway it is only three weeks until spring, or is it. Denver and the valley have experienced more severe weather than has happened here, so the moral is—make your own home here in God’s country.

Dr. Wm. Muchow, of Chicago, was here Wednesday, and stated that the Chain O’ Mines group of mining claims will be in readiness for operation the latter part of March. This is decidedly good news.

Mr. and Mrs. Frank Schmidt were down from Laramie, Wyoming, to attend the funeral of the late Nicholas Johns.

Mr. James Cody, who had been in Denver to attend the funeral of Mrs. Mary Jane Eplett, returned home Tuesday evening.

Mr. and Mrs. Rae Laird and Mr. and Mrs. L.C. Cavnah were up from Denver to attend the funeral of the late Nicholas Johns.

How to Make Marmalade French Toast, by Nellie Maxwell: Beat two eggs, add one half teaspoonful of salt, one tabelspoonful of milk. Spread six slices of bread with orange marmalade, put together in pairs. Soak the bread in the egg mixture until soft, then cook on a hot buttered griddle until well browned on both sides.

How to Make Lemon Mint Jelly, by Nellie Maxwell: Take a package of lemon gelatin and dissolve in two cupfuls of boiling water in which has been steeped a good sized bunch of mint, well covered for ten minutes. Chill and mold in small molds; serve with lamb. Garnish with a fresh sprig of mint on top of each mold of jelly.

Henry Paul, of Denver, spent a portion of the week looking after his mining interests in this section.

Miss L. Presnell left for Golden on Saturday, on a short visit with her parents.

Will Polkinghorn was a passenger to Denver on Thursday, on a visit with relatives and friends.

Mrs. William Hoefle and baby left Wednesday for California, on a visit with her sister in Los Angeles.

The work on finishing up the big shaft house on the California Mine has been delayed on account of the prevailing heavy windstorms, but the building is nearly under cover and will be completed in a very short time. The machinery is in place and steam connections are now being furnished.

Sinking with three shifts at the Clark-Gardner Mine on Quartz Hill is progressing favorably and a depth of 725 feet has been reached. Foreman Cannon says there is a big crevice of ore in the shaft, which has shown up for quite a distance. Drifting is being carried on at a depth of 642 feet, and daily shipments of mill ore to the mills at Black Hawk are being maintained. Rome, New York, parties are operating the property, with J.W. Bostwick as superintendent.

The introduction of oil for lighting purposes in this county was strenuously objected to, as it was thought it would endanger property.

George Schram has returned to Central, having completed his contract at the penitentiary at Canyon City.

Professor Hill, head of the smelter at Black Hawk, assured this paper that he was making preparations to purchase and reduce silver bearing galena ores, which was highly pleasing to the owners of mines carrying heavy lead mineral, and mention was made of George K. Sabin who was operating his claim on The Forks Mine on Quartz Hill, carrying both lead and zinc, which yielded from $30 to $200 in silver values, but by the stamp mill process, returned very little values.

Mr. A.M. Jones furnished this office with the following statement showing the yield of some of the mines on Quartz Hill and vicinity: Ores from the Hidden Treasure Mine was yielding 11 ounce gold to the cord in the stamp mills; and the Jones Claim on the California was returning 14 ounces. A claim on the Kansas vein leased by the First National Company to Mr. Riley, was turning out 12 ounces, and Captain Phillips, on the Jones Mine was sending out dirt that returned 10 ounces to the cord.

Sam Buell was fixing up the storeroom lately occupied by Mrs. Cody, next door to Chase & Sears, with the intention of moving his stock of books and stationery to the new location.

Mr. J.O Raynolds, agent of the Hazard Power Company, was offering to deliver black powder to the magazines at the various mines, for $5.50 per keg.

Mayor William Roworth, accompanied by his family, had returned from the East.

Central City school bonds were offered at 95 cents on the dollar, and were announced to draw semi-annual interest at the rate of 15 percent.

END_OF_DOCUMENT_TOKEN_TO_BE_REPLACED

Benefitting the county, schools, and much more By Don Ireland   This year marks the 30th anniversary of casinos opening in the former little mining towns of Black Hawk, Central City and Cripple Creek, Colorado. In those early years, smoking was allowed inside ... END_OF_DOCUMENT_TOKEN_TO_BE_REPLACED