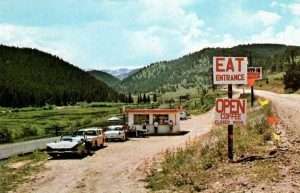 Amanda Norton, a junior at Gilpin County School, was inducted into the national chapter of the National Honor Society Wednesday night. The ceremony followed a dinner prepared by Honor Society members and attended by invited guests, including parents, Principal John Weishaar, Superintendent Paul Coleman, school board members and sponsor Elizabeth Fonseca. The short ceremony was preceded by original guitar composition performed by Chris Harris and Justin Dominguez. Honor Society members then lit candles to signify the four qualities members must exemplify—scholarship, service, leadership, and character. Following the induction ceremony Dr. Paul Levitt, a professor of English at the University of Colorado, spoke of the responsibility of high school in teaching young people to develop opinions and effectively communicate them.

Janet McFarland and their wolf visited students at Eiber Elementary School in Lakewood, where the kids were studying wolves. The chance to meet a real-life British Columbian wolf proved irresistible, the kids touched and petted wolf, delighted with the experience. McFarland and husband Rob raise wolves at their mid-county residence.

Died: Wilbur James Ziege of Littleton died Tuesday, February 6, at Littleton Hospital. Born March 13, 1921, in Denver, to Lewis and Eva Hunt Ziege, he was raised in Central City, where his father and uncle, Walter, operated Zeige’s Grocery. Another uncle, Will Ziege, once served as Gilpin County Commissioner. Ziege attended Clark Elementary School, and graduated from Gilpin County High School in 1938. He served in the U.S. Army Air Corps from 1942 until 1946. Mary Ellen Kastle became his wife on February 27, 1946, in Central City, where the couple lived until 1949. He worked for the Central City Water Department, and at Ramstetter’s Grocery. Ziege retired for health reasons in 1985 after 24 years employment with Rockwell International, where he was a supervisor at Rocky Flats. In addition to his wife, he is survived by daughters Sally Roush  and Sue Wood of San Diego, CA, Wendyy Clark of Englewood, and Lori Rosenberger of Denver; grandchildren Claire and Beth Roush, Chelsea Wood, and Bryan and Kevin Clark; brother Louis Ziege of Richland WA; and sisters Lucille Tryon of Lodi, CA, and Evelyn Clark of Haber, OR. Open viewing began Thursday evening and continues until Saturday morning. Services will be held at Trinity Christian Reform Church at 10 a.m. Saturday. Interment will follow at Chapel Hill Memorial Garden.

Across the Crossroads, by A.F. Mayham: It’s rather difficult at times to keep Uncle Ed in line. The Lennon Sisters, from the famous family of seven girls and three boys (so far) were in Denver Friday evening as part of the banquet program of the Mt. States Lumber Assoc. held in the Shirley-Savoy. Ed gleaned a little information, some of which he thinks is okay. Diane, the oldest, will be 21 in August, but she expects to get married in July, but not to Lawrence Welk’s son. Her intended is doing an Army round in Texas. Conjecture about the four sisters and the program is that a younger sister of 10 is being groomed to step in and fill out. Janet, 14, is now the junior member of the quartet, going up the ladder is Kathy, 16, and Jeggy, 18. Ed likes Peg pretty well and her alto voice. Anyway, the girls witnessed a crowd of about 1,500 lumberjacks at the banquet at $12 a plate.

Mr. and Mrs. John O’Hara of Kansas, have leased the rooms on the ground floor of the Masonic Temple, and will open about the first of May with a restaurant and breakfast shop. Mr. O’Hara will be remembered as being the proprietor of Paul’s Sandwich Shop on Main Street, which he sold last year, and he promises the same delectable meals and sandwiches as served for the past ten years.

Mr. Milo Fisher was home for the weekend and found his whole family ill with the flu, so did not return to his job in Wyoming until Tuesday morning.

Repairs are being made on the roof of the gym, reinforcing where the spire once was when the building was the Presbyterian Church.

Mrs. Ruth Blake put in “overtime” at the Corner Grocery Sunday, painting showcases and counters. The store interior is shiny clean and attractive and well-stocked with good things to eat.

Mr. and Mrs. Marlin Belcher were up from Golden Saturday, doing some work at their house in Chase Gulch.

Died: Sympathy is extended Mrs. Lydia Kemmerling in the death of her husband Tom. He had been in poor health for a long time.

Mr. W.S. Parfet, superintendent of the mining section of the Chain O’ Mines Company in this city, left for Chicago on Wednesday morning, on matters of business connected with the company.

Mr. C. H. Hanington, an old-time Central City lad, made this office a social call on Saturday afternoon last. He was among the number who visited the property of the Chain O’ Mines Company in this city, and was most agreeably surprised at the immense holdings and operations of this company that has been established here in the short time of only two years.

Mr. Rae Laird’s auto, which was stolen in Denver a couple of weeks ago, was found in Shreveport, Louisiana, last week, and two men who were in possession of the car were arrested and are now in jail in that city. Mr. Laird has been summoned by the government, and leaves for Shreveport on Saturday, where the men will be charged with stealing and driving his auto out of the state.

Died: Rev. Father Marcel Desaulniers, who was pastor of St. Mary’s Church in this city in the early ‘90s, died in Three Rivers, Canada, a week ago last Sunday, after forty-seven years labor in the Catholic priesthood, the greater portion of those years in Colorado. He came to Colorado in 1887, and was transferred to Central City, remaining here until 1907, when he was transferred to the parish of St. Mary Magdalen, at Edgewater, near Denver.

Mrs. Rosa Hughes and Miss Lizzie Jones of Russell Gulch, visited their mother, Mrs. Ed. Jones in Denver on Sunday, and report she is recovering from her illness.

Messrs. A. Rachofsky, John Teague, and Kit Trezise were initiated into the mysteries of Calanthe Temple No. 34. Rathbone Sisters, at their last regular meeting, and are now full-fledged Sisters.

Mrs. G.A. Allen, of Black Hawk, who was shot by her husband last week, is showing some improvement, and has been able to take nourishment. Her lower limbs are paralyzed and, unless complications set in, her chances for recovery are very good. Mr. Allen is in the county hospital in Denver, and while he has been in a dangerous condition at times, the last report seems to point to his ultimate recovery.

The funeral of Zula M. Allen, who was killed by her father in Black Hawk last week, was held on Friday afternoon, and was attended by the school children of the higher grades in a body, each scholar having pinned to his or her coat or jacket a white ribbon covered with crepe, and all of them wore a buttonhole pink or other flower, while many carried bouquets of flowers. Rev. Van Valkenburg of Erie, Colorado, conducted services at the Methodist Church, after which the remains were interred in the Knights of Pythias Cemetery west of Central City.

Sheriff Oscar Williams arrested Ray E. and Otis Busley Tuesday evening at the county line between Gilpin and Jefferson Counties, who were driving a truck loaded with an air compressor which they had stolen from near the Star Mine, on Clear Creek, owned by the Marquette Mining Company, and landed them in the county jail. They had broken up the compressor and were hauling it to Denver to be sold as junk. Their case will come up before the district court at its next session. The compressor was worth nearly $1,000, and the amount constitutes a penitentiary offense.

The Nottaway Gold & Copper Company, operating in Lake District, has found the lost vein which Manager Vivian had been looking for. The vein, which is believed to be the Aurora, was cut last week in driving a crosscut south at a depth of 400 feet, the crosscut having been run in nearly 30 feet. The crevice is fully three feet in width with a smelting streak 12 inches wide, showing black sulphurettes and black oxide of copper as was formerly taken out of the upper levels, and which was always a good grade of smelting ore. The shaft will be repaired below the 200-foot level and put in shape for sinking another lift of at least 100 feet.

Born: In Nevadaville, February 7th, 1900, to the wife of Sam Manuel, a daughter.

Mr. Teats has concluded the sale of the Gilpin and Coaley silver mines below Black Hawk, but still retains an interest in them.

Moses Hall had bought the Kimber Mill up on Eureka Street, and started up the first of the week crushing quartz from the Pennsylvania Lode.

Hugh Butler, a member of the legislature from Gilpin County, returned to Central the first of the week.

Died: George Smith, a colored man, was hanged on Friday, on Casto Mountain, and was buried only a few feet from where the scaffold had been erected. Smith, on the night of February 15, 1868, in company with his partner, entered the home of William Hamblin, in Quartz Valley, quarreled with him, and killed him, and then threw his body into a mine shaft. Smith’s partner received a fatal shot before he was captured. The hanging was witnessed by at least 500 people, several women being in the crowd.

END_OF_DOCUMENT_TOKEN_TO_BE_REPLACED

Where the dead get to tell their story By Jaclyn Schrock On Saturday, August 21, the Gilpin Historical Society held their annual Cemetery Crawl. Tickets allowed the shuttle of hundreds of guests from the Teller House parking lot to the Cemetery. Depending on v... END_OF_DOCUMENT_TOKEN_TO_BE_REPLACED

Benefitting the county, schools, and much more By Don Ireland   This year marks the 30th anniversary of casinos opening in the former little mining towns of Black Hawk, Central City and Cripple Creek, Colorado. In those early years, smoking was allowed inside ... END_OF_DOCUMENT_TOKEN_TO_BE_REPLACED