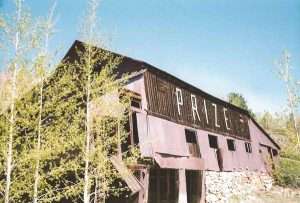 Jason Wheeler, sophomore, and Carrie Coleman, junior, are the December Students of the Month at Gilpin County School. It’s not an easy job being selected Student of the Month. Each student must have at least a 3.0 grade point average and be involved in school activities. The students are nominated by the teaching staff. They are chosen at the end of each month. Leslie Bridges is the December Teen of the Month. She was nominated for her excellent work ethic and habits, as well as her strong participation on the yearbook staff.

The old Hepberger house, located at 120 Main Street, Black Hawk, may be scheduled for demolition by the end of May. In a study performed last summer, prepared by a branch of the United States Department of the Interior, the Hepberger house was constructed in the 1860s. A copy of the study is on file at Black Hawk City Hall. This makes it one of the oldest structures in the area, explained Mona Dawkins, Black Hawk city clerk and treasurer, on Tuesday. Another building in the area of about the same age is the Gilpin Hotel. However, it was gutted by fire in December. The present owners, Steven and Ardetta Robertson, have decided to have the Hepberger house demolished, based on the evaluation of local contractor Blair Wacha. Ardetta said on Tuesday that Wacha would not give them an estimate on restoration because, according to him, the wood has rotted beyond repair and the structure is not salvageable. Instead of having the building demolished, the Robertson’s would gladly donate both of the structures on the property to anyone who is willing to move the buildings at their own expense. If someone does not take the Robertson’s up on their offer and move the structures to another location, the Robertson’s plan to obtain a demolition permit, formally issued by the City of Black Hawk, for its removal. This job will need to be supervised by Ken Burnett, Black Hawk’s building inspector. At present, the Robertson’s only have a verbal agreement with a local resident for demolition on the building. In the future, a written contract will be drawn up. The Robertson’s future plans include constructing a new building at the location to house “The Image Maker,” Ardetta’ beauty salon. The Image Maker is now being operated in a separate room at the Black Hawk Laundromat.

Across the Crossroads, by A.F. Mayham: During the chinook the other day, when the mercury climbed up to 18 degrees, the rail birds took advantage of the situation and congregated in convenient spots to go through the regular ritual. Meetings were called to order in the “short form” and reports submitted bordering on the sick list, those in jail, others on parole and still others with trouble brewing with the Infernal Revenue and the Social Security or Welfare departments. Some thought more missions should be established, others were in favor of the return of the gold standard, and the old saloon where for a nickel glass of hops one could get all the cheese and crackers that he could stuff under his belt, and sometimes sliced ham was included. Committees were appointed to investigate these matters, to be reported in detail at the next meeting when the thermometer hits 18 again. One lugubrious member recited the “Cremation of Sam McGee” and the meeting was adjourned sine die with the hope for better things sans souci. The “short form” has nothing to do with those who wear longies.

The Mountain State Telephone Company has several men working on the telephone equipment at the rear of the bank building. It is the intention of adding another group of numbers to the present frames, and enlarging all facilities for more telephones.

Mr. George Haagenstad is the new custodian of the high school building and gymnasium, and also the driver for the school bus between this city and Rollinsville, and entered upon his duties Monday.

Mr. and Mrs. Thurman Leach returned home Monday from two months spent near Albuquerque, New Mexico. They are glad to be home as the weather was very bad all the time they were away.

Miss Barbara Moore is staying in Denver, while employed as a secretary at the Brooks Engineering Company.

Mr. Otto M. Blake is home, recovering from surgery at the Presbyterian Hospital some time ago.

Mr. Tony Shearer returned home Monday from an interesting trip to Old Mexico, where he inspected relics, monuments, etc., of the ancient peoples in that country.

Walter Scott, Jr., and wife, arrived from California last week on a visit with his parents, in this city.

Sheriff Oscar Williams and wife left for Denver Tuesday morning, the former to attend the annual meeting of all the sheriffs of the state, held that afternoon, while the latter visited with friends.

Thomas Mitchell boarded the bus from Central to Denver Tuesday morning to take in the attractions given by the State Mining Association that evening, and to visit his mother at Littleton, who is the guest of her daughter, Mrs. Herb Thompson and family.

Another week of extremely cold weather has gripped the mountains and plains of Colorado, and new records have been established that will be referred to in after years. On Friday last thermometers registered 15 degrees below in this city, and from 26 to 30 degrees below in many other places in the county. Monday night this locality experienced 20 below weather, with the temperature rising during the daytime, and then again falling at night down to the zero mark. This has been the longest spell of cold weather within the recollection of the oldest resident, and a change to reasonable weather will be greatly appreciated.

Died: In Central City, at the home of her daughter, Mrs. M. Bennett, on January 17, Mrs. Anna Miles Speers, aged 78 years. Deceased was born in Ansonville, Pa., January 14, 1852, and came to Gilpin County with her husband some ten years ago, residing in Black Hawk where Mr. Speers was engaged in mining, and where he died several years ago. The cause of her death was chronic bronchitis and heart trouble, from which she had been suffering for years. A pleasant, lovable lady, who will be sadly missed by old and dear friends who have known her ever since she came to Gilpin County. She is survived by her daughter, Mrs. Mary Bennett, a granddaughter, Anna Bennett, of Central City; two sisters, Kate Reynolds, of Reynoldsville, Pa., and Mrs. Hannah Speers, of Pittsburg, Pa.; a son, Charles of Oklahoma City, Ok.; and two adopted children, Mrs. Helen Brisbolse, of Toronto, Canada, and Dorris Speers, of Detroit, Michigan. Funeral services were held at the Hamllik Mortuary, Central City, January 22nd, Mr. Hugh L. Lawry officiating. Interment was in the Masonic

Monday night, shortly before midnight, four convicts, Thomas Reynolds, C.E. Wagoner, Kid Wallace, and Antone Woode, while in the guards’ dining room for lunch in the penitentiary at Canyon City, overpowered Captain Rooney and killed him instantly by stabbing him through the heart. The men escaped over the walls. As soon as the fact was known of the escape, posse’s were formed, armed with pistols and shotguns, determined on their capture. Woode and Wallace were captured on the Canyon City toll road, about ten miles from Canyon City. The men were seen passing the toll gate by the keeper, who at one time was a guard at the penitentiary, and concluded that the men were ones wanted and started in pursuit, catching up to the men in their camp, about five miles from Victor, and captured both men and landed them in the penitentiary. They men had no coats and their striped trousers had been painted black. They were badly tired and footsore, and had had nothing to eat for two days, except an ear of corn, which they parched at their campfire.

Mrs. Hugo Kruse entertained a number of friends at her residence on Gregory Street on Friday afternoon.

Thomas Vivian was seriously injured the first of the week on the Gregory Mine, by a falling scale of rock.

Mrs. D.C. Collier and Mrs. Crane were circulating a petition among the ladies of the county to find out the sentiment of the county for woman suffrage.

The legislature had decided to locate the territorial university at Boulder which town had donated in land, lots and cash about $12,000.

Died: Word was received here of the death of Louisa Keith, wife of Daniel Kimball, in Boston, on January 20, aged 68 years. She was the mother of George K. Kimball, of Black Hawk.

END_OF_DOCUMENT_TOKEN_TO_BE_REPLACED

Where the dead get to tell their story By Jaclyn Schrock On Saturday, August 21, the Gilpin Historical Society held their annual Cemetery Crawl. Tickets allowed the shuttle of hundreds of guests from the Teller House parking lot to the Cemetery. Depending on v... END_OF_DOCUMENT_TOKEN_TO_BE_REPLACED

Benefitting the county, schools, and much more By Don Ireland   This year marks the 30th anniversary of casinos opening in the former little mining towns of Black Hawk, Central City and Cripple Creek, Colorado. In those early years, smoking was allowed inside ... END_OF_DOCUMENT_TOKEN_TO_BE_REPLACED