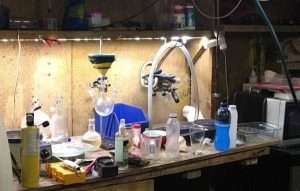 A four-month investigation of a burglary and methamphetamine manufacturing facility (speed lab) at a Gilpin Gardens cabin culminated in the arrest of Daniel V. Phillips, in Basalt, CO, on January 6. Phillips, who has a Basalt address, allegedly broke into the cabin and set up the speed lab in there. A burglary was reported at the cabin by the owners in early September, and investigation revealed that speed had been manufactured there.In addition to the Gilpin County Sheriff’s Office, three other Colorado law enforcement agencies, and agencies from two other states, were involved in the investigation. Hartman obtained an arrest warrant and was assisted by the Basalt Police Department, and the Ninth Judicial District Attorney’s Office in taking Phillips into custody at his Basalt residence on the morning of January 6. He is in the Gilpin County jail on $25,000 bond, charged with two felonies, the manufacture and possession of a Schedule II controlled substance. Charge of second-degree burglary was not pursued by the local district attorney’s office, Hartman said. Additional investigation into the case is continuing, Hartman added

The Belvidere Theatre has a new owner, Jay Williams of Denver, and renovation of the old building is underway. Plans are to open a deli-style restaurant and gift shop downstairs, and to bring in music upstairs, said Eddie Moore, who will manage the business. Moore hopes to line up big name country-western entertainers for the summer season, he said Tuesday. In addition to music, consideration is being given to staging theatrical performances at the Belvidere, which served as a dance hall and theater when first built.

Agnes Gates was honored by the Denver Press Club as one of only 20 women who have been members for over 40 years. Gates, a resident of Central City for many years, joined the club in 1930.

Tune into Channel 6, January 18, at 7:30 p.m., for Legends, an award-winning perspective on the “Old West,” which features a segment filmed in Nevadaville in 1988. The program highlights picturesque out-of-the-way rural Rocky Mountain towns, and features “tall tales of miners, tommy-knockers, ghosts and undying love.”

Born: New grandparents Bill and Kay Lorenz have visitors. Daughter Lisa and husband Smokey Artz and little Kelly Marie are in town for a few weeks. Kelly Marie is the newest Lorenz grandchild – the third, in fact – all of whom are December babies. Born December 15th, 1990, at 11:15 p.m., in Valencia, California, Kelly weighed 6 pounds, 4 ounces, and measured 19 inches. When she was only a week old, she took her first big trip when she, Mom, Dad, and Grandma Kay motored to Black Hawk from Valencia. Great-grandmothers Florence Dyer and Anna Lorenz are local residents, while Kelly’s paternal grandmother, Mary Artz, lives in Connecticut.

Across the Crossroads, by A.F. Mayham: This being a leap-year, it accords the gals a chance to snare the man of their choice, maybe, cause referring to Molly Mayfield or Abby Van Buren, some gals have become entangled with another gal’s legit sweetheart. Quite often a gun is used, but in those cases everybody loses. Physical attraction doesn’t last long without some other form of allurement besides high heels. Some gals wear high heels because they don’t want to be kissed on the forehead. And then there is the little matter of a leveling of the brain. A chatterbox is usually soft shelled and doesn’t read anything but Hollywood scandals, devoid of what our forefathers used to designate as “resources within one’s self.” Examples are often found in the woman who slams on the radio or TV the minute she gets up and, if she has been out during the day, the minute she enters the man’s sanctum where he would like a little peace, on goes the radio full blast, anything for noise and confusion, and 9 times out of 10 the program isn’t fit for old Towser to listen to, and he gets up and goes out. So leap year, gals, should be a give and take affair, but take all you can get and give value received, but don’t go off on the honeymoon until you have ascertained for sure that you and your old man are going to make a go of getting hitched on a mutual basis, and don’t be in a position where the young fellow was when he met a friend just after the nuptials had been performed. Said he, “I was going to give you some advice, but now it’s too late.” And, for the old bucks, the woman needn’t worry if he turns out to be a woman chaser. An old dog will chase cars but wouldn’t know what to do with one if he caught it. Tommy Manville, well-known rich guy, has just taken to father a 20-year-old gal, his 11th bride, and maybe he is approaching the age of the old dog, but he seems to be a good chaser, leap year and other eras.

For the entire week, and we might say for the past week, the weather clerk has doled out to the mountain region below zero weather, which has made it mighty uncomfortable. From 4 to 6 below in this vicinity, down to 18 below at Apex and other sections at that altitude, which lasted for days, meant real winter. When we read of weather conditions in the East, with floods and blizzards, we should be thankful we are living in the mountain regions of Colorado.

How to Make Graham Apple Pie, by Nellie Maxwell: Take two dozen crisp graham crackers, roll and crust, add one eighth pound of melted butter and mix well. Line a pie plate and shape it into a pastry shell. Peel, core, slice and cook one half dozen good flavored applies. Mix one cupful of sugar, powdered cinnamon to taste, one eighth pound of butter and a little salt. Do not stir more than just enough to mix. Fill the cracker lined plate and place in a hot oven for ten minutes Serve topped with whipped cream. This is a pastry that the children may eat.

Frank Moody drilled into a missed cartridge in the Fourth of July Mine on Quartz Hill on Saturday, causing an explosion of the powder remaining and was badly injured. He was working in a stope 250 feet below the surface, and on account of the hoist being out of commission, he and the others who were with him, were compelled to climb to the surface, where Dr. Bonesteel, who had been summoned, found Mr. Moody’s face blackened by the flash of fire from the explosion, and some gravel lodged in the right eye, but nothing serious was to be feared. Mr. Moody was taken to his home on Spring Street, this city, and was recovering nicely from his injuries. Only a portion of the powder had exploded in the hole being drilled, or his injuries would have proven more serious.

Mr. and Mrs. George Godfrey and children, of Russell Gulch, left for Independence, Colorado, on Tuesday, where Mr. Godfrey has a good position.

Steve Hoskin received a postal card during the week from Hal Sayre, postmarked Port Said, on the Suez Canal. It was issued by the Turkish government and was quite a curiosity.

Editors F.G. Bonfils and H.H. Tammen, owners of the Denver Post, were shot by W.W. Anderson, in their offices on Saturday last, each victim receiving two bullets in his body, Mr. Bonfils being the most seriously injured. The whole cause of the trouble which led to the shooting was the action taken by Anderson in misrepresenting himself to Packer, at the state penitentiary, who had been confined there for the past seventeen years, on several charges of manslaughter, and for whom the Post was endeavoring to secure a release. A dispute arose and Anderson left the editorial rooms of the Post, returning in a moment with a revolver in his hand, and shot Mr. Bonfils twice, and then entered the room of Mr. Tammen, and shot him twice. Anderson was arrested an hour later and was released on bail in the sum of $20,000.

Born: In Nevadaville, January 16th, 1900, to the wife of Charles Workmeister, a son.

Mr. Lea, of Black Hawk, had introduced a bill in the legislature extending the elective franchise to women.

The Nevada public schools had an average attendance of 75 scholars, under the principalship of Mr. Ambrose.

Mr. J.B. Terry, the well-known mill man, returned from the East with his family.

Thursday’s issue of the Register contained a copy of a bill which had been introduced in Congress for the admission of Colorado as a state.

Mr. H.J. Hawley, of the firm of Lake & Hawley, returned from the East the first of the week.

Mr. Robbins, who was repairing the telegraph line, found a man hanging from the branches of a tree in a gulch below the Simpson home. From indications the body had been hanging there a month or longer. The coroner at Golden was notified of the find.

END_OF_DOCUMENT_TOKEN_TO_BE_REPLACED

Benefitting the county, schools, and much more By Don Ireland   This year marks the 30th anniversary of casinos opening in the former little mining towns of Black Hawk, Central City and Cripple Creek, Colorado. In those early years, smoking was allowed inside ... END_OF_DOCUMENT_TOKEN_TO_BE_REPLACED

Benefitting the county, schools, and much more By Don Ireland   This year marks the 30th anniversary of casinos opening in the former little mining towns of Black Hawk, Central City and Cripple Creek, Colorado. In those early years, smoking was allowed inside ... END_OF_DOCUMENT_TOKEN_TO_BE_REPLACED