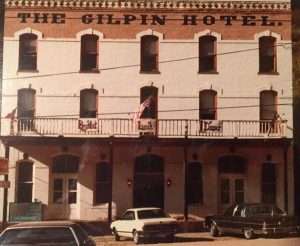 First degree arson was the case of the December 10th fire at the Gilpin Hotel, according to the report filed by Mike Russell, of the Jefferson/ Gilpin Arson Response Team. The “intentionally accelerated arson fire” spread into the hotel from a shed just outside the kitchen entrance, according to the report. Evidence that a flammable liquid had beenignited was apparent in at least three locations. The fires appeared to have been set on the wood deck outside the southwest corner of the shed, as well as just inside the door close to the kitchen wall, and in the southeast corner of the shed. The remains of a book of matches, a gallon container and its lid were found in the corner of the shed. The fire spread to the kitchen through a window fan opening in the south wall. Flames were channeled upward by the corrugated metal sheeting on the hotel’s west side. The physical investigation of the fire site has been concluded said Russell Wednesday. A lab report from the Colorado Bureau of Investigation is expected later this month, and should identify the flammable liquid used to start the blaze. Witnesses and suspects are being interviewed, Russell said, and alibis are being checked. The arson team is investigating seven or eight possibilities, he said. Anyone with pertinent information is urged to call Mike Russell at the Gilpin County Sheriff’s Office, Crimestoppers, or the Arson Hotline. Crimestoppers and the Arson Hotline both will respect the anonymity of callers if possible, and both offer rewards for information leading to a conviction.

Born: Ed and Debra Silva announce the birth of their daughter, Elise Anne. She was born at 9:33 a.m., Tuesday, December 26th, at St. Joseph’s Hospital in Denver. Elise Anne weighed 6 pounds, 8 ounces, and measured 19 ½ inches in length. She has an older sister, Karmadee, 7. Maternal grandparents are Robert and Ginny Clineff of Arvada. Paternal grandparents are Robert and Meredith Silva of Pueblo. Elise Anne and her parents are residents of the Bun Gun subdivision.

Born: Debbie and Mark Merkley announce the birth of their first child, a son, Dakotah Levi. Born at Lutheran Medical Center on December 14th, Dakotah weighed in at 6 pounds, 11 ounces, and measured a tall 20 inches. Maternal grandfather, Harlie Golden, lives in Coaldale, Colorado. Paternal grandparents are James Merkley, of Denver, and Irene Merkley of Aurora. On his dad’s side, Dakotah also has a great-grandmother. She is Edna Farnym, who lives in Louisville, Kentucky. The Merkleys are residents of Dory Hill Road.

Across the Crossroads, by A.F. Mayham: During the cold weather; cold and heat depends on how your physical attributes stack up. If you think it’s cold, then it’s cold, and if you think otherwise, then it’s otherwise, but cold weather seems to draw on the coffee supply, the great American drink aside from beer. Some folks can make coffee and other folks can’t seem to brew the bean so that it tastes like coffee. Café royal is a good warm up drink—just put a lump of sugar in a teaspoon of brandy, ignite, and lower the spoon over the coffee, flaming the surface. Some like their coffee strong and without sugar, cream or brandy, and others like their brandy unadulterated without coffee; there’s no end to taste: it is more variable than the weather, but everybody likes weather for the reason that they can’t do anything about it, only take it and like it. Coffee is a little bit different—you don’t have to take it or even like it. Piles and piles of conversation pass over the coffee cups and it’s a lucky break that cups do not talk, else something besides the coffee would be spilled. There’s many a slip ‘twixt the cup and the lip. Now that the Food and Drug Act is getting after the lipstick manufacturers on account of the coal tar products used, we may expect a slight diminution of the lipstick rim on the cup. Men don’t object much to lipstick if they get it firsthand, but they don’t like it passed on the coffee cup—there’s no warm-up to it and cold weather deserves a warm adjective.

Wm. Landau reports that the Holland Mine in Russell Gulch, owned by him, was broken into last week and considerable damage was done. He has notified Sheriff Tom Collins, and it is hoped these vandals will be apprehended.

A meeting of the newly elected school board for the County was held in the County Superintendent’s office last Thursday evening. Mr. Hardin of the state board was present to help with the new organization. The following officers were elected: President, Mrs. Mildred Blake; Vice President, Miss Kathryn Eccker; Secretary, Mrs. Phyllis Powers; Treasurer, Mrs. SoRelle. Mr. Ralph Calabrese was asked to assume the duties of the superintendent.

Mr. And Mrs. Arnold Meyer and daughter, of Cumberland, Iowa, spent the holiday season with her mother, Mrs. Sanel, of this city. Mr. Meyer continued his trip from this city to California, but has returned and will leave with his family for home this Friday morning.

Zero weather prevailed here on Tuesday night and Wednesday morning, with a light fall of snow on Monday and Tuesday nights. The sun came out bright Wednesday morning, but it took nearly all day to distribute any warmth over the mountain area. Thursday morning was one of the coldest of the winter, with thermometers showing 10 below in this city, 12 below in Black Hawk, and much lower in outside districts. There was no wind blowing and the cold was not felt as keenly as it really was, for which we are all more than thankful.

How to Make Orange Poultry Sauce, by Nellie Maxwell: Take a teaspoonful of bouillon extract, one cupful of water, to make stock. Season with pepper, paprika, one cupful of orange juice, two oranges, with a few slices of rind. Melt two tablespoonfuls of butter, add two tablespoonfuls of flour, cook until creamy, add the stock mixture, stirring all the while. Cook until thickened, remove from the fire and add one half cupful of white grapes which have been skinned and seeded. This is excellent with fish, poultry, or game.

Ernest Spear fell over an embankment near his residence on Bobtail Hill on Thursday afternoon, caused by an epileptic fit. Dr. Asquith was called, who found the lad badly bruised from the fall, but no serious results are expected.

Mr. R.J. Van Vaulkenburg and wife, of Erie, Colorado, are visiting at the home of their daughter, Mrs. Ed. C. Hughes, of Black Hawk.

Gus Grutzmacher, of Black Hawk, met with a serious and painful accident at the boiler works last Tuesday, by having a small piece of steel chipping from a boiler plate striking him in the socket of his left eye. Dr. Ashbaugh of Central, removed the piece of steel and he is getting along nicely.

All of the Grutzmacher children of Black Hawk, are down with the whooping cough, and during the week, the youngest of the children was in a serious condition.

Mr. R.L. Martin, of the Banta-Hill Mines Company, who was taken suddenly ill while at the above property last week, was brought over to Central on Monday in a closed carriage and taken to his rooms in the Teller House, where he is recovering nicely from his sudden illness.

The Waincross Mining Company, operating the Wain Mine in Chase Gulch, Black Hawk, has placed a Cameron pump in the main shaft, which is handling the water in good shape. Development work is being prosecuted with day and night shifts, and the 318- and 400-foot levels are reported as showing streaks of good-looking ore.

Born: In Central City January 8th, 1900, to the wife of Bart Camille, a daughter.

Married: In Central City, January 10th, 1900, at the residence of the bride’s mother, Rev. A. McKay officiating, Mr. Albert Garland of Aspen, and Miss Clara Morgan, of this city.

Governor Edward M. McCook offered a reward of $200 for the apprehension and conviction of the parties who had been robbing the mails between Cheyenne and Denver.

Warren Hussey, the banker, handled three silver bricks on Tuesday from the Franklin Company’s works, weighing 1,235 ounces, and worth $703.

Mr. L.A. Klein, operating the German Mine, brought into the Register office a gold pan, heaped up with quartz specimens, which fairly glistened with free gold. The weight of the quartz was 18 pounds, and Mr. Klein valued them at least $500.

Mr. Goodspeed had retired from the position of cashier in the Rocky Mountain National Bank, and was succeeded by Joshua Reynolds.

Edwin Hall, a brother of Frank Hall of the Register, paid a visit to Central City. He was a traveling salesman.

Died: William Todd was killed in the Keath Mill on Friday noon. He was placing a belt on the main shaft, with the engine running, and his blouse was caught around the shaft, and before the engine could be stopped, he was choked to death.