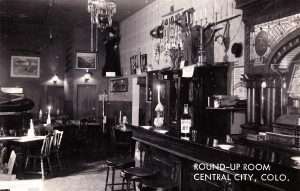 After collecting signatures from 140 citizens, Black Hawk Aldermen voted unanimously to support the efforts of Central City Preservation, Inc. (CCPI), to have limited gambling legalized in the two cities. Going door to door, aldermen polled 140 locals. The results show overwhelming support for the gambling proposal, with 126 in favor, 5 opposed, 8 not at home, and 1 out of the country. While polling the citizens, the aldermen heard various concerns and questions raised, all of which they intend to address. A similar poll is being conducted in Central City, and although the results are not yet complete, it appears that a similar majority of citizens there also would vote in favor of gambling in their community if it were placed on a state ballot. The straw polls were conducted at the request of State Senator Sally Hopper, who wanted to know how the citizens felt before guiding the pro-gambling faction through the legislative process. State Representative Sam Williams has also agreed to help light the way through the maze of government channels. CCPI hopes to have a constitutional amendment placed on the statewide ballot in next year’s general election to legalize limited gambling in specific areas of Central City and Black Hawk. The state legislature must approve placing the question on the ballot first, and if it does not, gambling proponents say they will try to have gambling legalized through the territorial charters of the two cities, both of which approve gambling. Before the Black Hawk aldermen voted on CCPI’s request for support, Alderman Herb Bowles questioned CCPI representative Lary Brown for at least 10 minutes on whether Black Hawk would be excluded from the gambling proposal because it is not a designated National Historic District. Not as far as CCPI is concerned, Brown said, and historic designation is not required by the resolution CCPI offered the city of by CCPI’s stated goals and objectives. Neither he nor CCP can control the actions of the legislature, Brown said, but Black Hawk is included in the proposal being promoted by the organization.

Gilpin School’s wrestling team placed first in the tournament it hosted Saturday, December 9. Lyons placed second, third place was taken by Denver Academy, Faith Baptist placed fourth, and South Park came in fifth in the meet. Coach Zane Miner was pleased with the win, noting that Lyons had placed higher than Gilpin in the previous tournament at Merino. He stated that team members are beginning to show the results of intensive practice. “It’s a nice start,” Miner said, “Now we need to build on it.” Standings by individual team members in the divisions were as follows: Tony Kervitsky, 3rd place; Chris Straub, 2nd; John Flesher, 2nd place, Danny Bartell, 3rd place; Mike Bauer, 1st place; Kaz Oba, 1st place; Fred Weber, 1st place; and Chuck White, 1st place. The wrestling team meets Denver Academy Thursday, December 14, at home, and will compete in four tournaments through the month of January. The season will end with the District Wrestling Tournament, held at Gilpin School in early February. The teams who place first and second in the eight-team tournament qualify for the state competition.

Across the Crossroads, by A.F. Mayham: The public sits idly by while their freedoms slowly vanish one by one when, if they should take more interest in elections and politics in general, they might preserve what’s left but we are far down the road as it is and maybe too late. The Boston tea party was the result of one tax; now we have a system of double taxation, some of it without representation. Most of the money earned by corporations in which the public owns stock is subject to a 52 percent tax. Then the stockholder, you, are subject to a second federal and state income tax. What are you doing about it? Nothing, only reading and grumbling. Then there are mines that cannot operate, paying $15 a day for help while the product is stymied at 1934 prices, but taxes have to be paid on idle properties while the government imports and stocks foreign ores. What are you doing about it? Nothing, only reading and grumbling. It’s too much of a task to write your congressmen—it’s easier to grumble, isn’t it?

Mr. and Mrs. Even Jacobson arrived last Saturday from New Mexico, and expect to remain for several weeks.

Mr. and Mrs. Gus Rudolph will spend Christmas with his sister Hannah in Walden, Colorado.

Died: Ernest J. Eccker died Wednesday morning at a Denver hospital, after a major operation. He is survived by his wife, Alberta, and a brother, Andy Eccker. He was about 59 years of age. He was born on the Eccker ranch midway between Black Hawk and Rollinsville, and has been a resident of Gilpin County all his life. Services will be held Saturday morning from the Catholic Church in Central City, with interment in Dory Hill cemetery.

Gustave Kruse was taken to Denver on Sunday by Mr. W.O. Ziege, on a visit with his son, Albert and family, and to receive medical treatment.

Mrs. James Dunstan, who had been with her sister, Mrs. Mole in Russell Gulch, was brought to Central Tuesday, and is now at the home of Mr. James Johns. She is reported as slowly improving from her recent illness.

Fruit whips can be made of any fruit pulp of any pronounced flavor and color. Heat the fruit pulp to dissolve the added sugar, and combine while hot with the stiffly beaten egg whites so as to cook the eggs partially and give body to the mixture. After the fruit pulp has been combined with the egg whites, and sugar, the mixture may be baked, if desired. When baked in a dish surrounded by water in a very slow oven (225-250 degrees F) for about one hour, the whip should not fall, and may be served either hot or cold. Or, fruit whips may be served as soon as mixed without cooking. Whipped cream is a delicious addition to cold fruit whips. Prunes and apricots make especially good fruit whips. Leaflet 39 “Eggs at Any Meal,” which may be had from the U.S. Department of Agriculture, tells how to make these desserts.

The Shakespeare Club met on Monday evening at the residence of Mrs. R.V. Parenteau and heard readings from “A Midsummer Night’s Dream.”

Richard Williams and James Grenfell of Nevadaville left Thursday morning for Denver, where they will enter their hounds for the 32 dog coursing contests, which will take place in that city during the week.

George Godfrey, who with his family returned to Russell Gulch from Cripple Creek last week, left on Tuesday for the big camp, where he has a fine position. His family will remain in the Gulch for the balance of the winter.

Mrs. C.L. Sisson and daughter, Miss Vera, of Black Hawk, returned from Denver on Sunday evening, after a pleasant visit with friends for over a week.

At the Lotus Mine in Russell District, Manager Johnson is getting ready to make a 300-ton shipment of concentrating ore to Idaho Springs, which will be loaded on the cars at Black Hawk. Mr. Johnson has made some necessary repairs to the ore bins, and the shaft is now in sure shape for the winter.

George Fertig, of the Golden Sheaf property in Vermillion District, shipped some ore to one of the mills in Black Hawk during the month which gave values of 5 ounces gold to the cord, with the tailings worth $16.30 per ton.

Married: In Nevadaville, December 20th, 1899, at the residence of the bride’s parents, Mr. and Mrs. Corneleius Matthews, William Grenfell and Miss Sadie Lutey.

Died: In Nebraska, December 13th, 1899, while on his way to Texas, Samuel Cushman, a former well-known resident of this city.

Thermometers in Lump Gulch, on Sunday, showed 14 degrees below zero, and 17 on Monday.

Alexander Cameron, who was mining on North Clear Creek below Black Hawk, during the fall and winter months, reports that his production for that time was 33 pounds and 8 ounces gold, with $18.13 per ounce. He worked seven men and the yield was about $11 per day to the hand.

END_OF_DOCUMENT_TOKEN_TO_BE_REPLACED

Where the dead get to tell their story By Jaclyn Schrock On Saturday, August 21, the Gilpin Historical Society held their annual Cemetery Crawl. Tickets allowed the shuttle of hundreds of guests from the Teller House parking lot to the Cemetery. Depending on v... END_OF_DOCUMENT_TOKEN_TO_BE_REPLACED

Where the dead get to tell their story By Jaclyn Schrock On Saturday, August 21, the Gilpin Historical Society held their annual Cemetery Crawl. Tickets allowed the shuttle of hundreds of guests from the Teller House parking lot to the Cemetery. Depending on v... END_OF_DOCUMENT_TOKEN_TO_BE_REPLACED