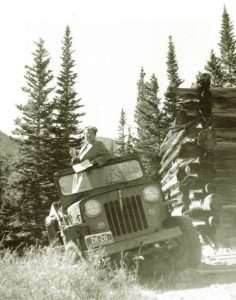 Looking for natural ornaments and stocking stuffers for Christmas? Outdoor Education students at Gilpin County School have been busy making corsages, door ornaments and table centerpieces from evergreens, pinecones and other natural materials collected on school grounds. In addition, the students have been turning out polished aspen woodkeychains. These items will be available in Central City at the Eureka Trading Post and the Holiday House, and possibly at the Sweet Aspen, through the holiday season. The corsages have been especially popular at school; 25 have already been sold. All items will be reasonably priced, said Outdoor Ed Director Larry Beissel, and are perfect for last minute gifts.

Dan Wendleton has been selected one of the top four Air Force ROTC cadets at the University of Wyoming, reports proud mom Pat Wendleton. He will be interviewed as a candidate for the prestigious GNC Award, which is given annually to the top 100 freshmen or sophomore cadets in the nation.

Born: Jeff and Mary Aiken are the parents of a new daughter, their first child. Katherine Marie was born at 2:50 a.m., November 25th, 1989, at Humana Hospital in Thornton. She weighed 6 pounds, 3 ounces, and measured in at 19 ½ inches. Paternal grandmother Marge Aiken lives in Philadelphia PA. Maternal grandparents Norman and Virginia Holman are from Edgerton, WI. Katherine is at home with her parents in Central City.

Born: After a helicopter flight to Boulder Community Hospital just in the nick of time, Ginger Stephens of Central City is proud to announce the birth of her son, Thomas Jacob Stephens. Born at 12:05 p.m., November 25th, 1989, Thomas weighed in at 7 pounds, 2 ounces, and measured 19 ½ inches long. Grandmother Carol Moncrief-Prisk of Central City is elated and adores her new grandson. Great-grandparents are Edna Prisk of Hico, TX, and Geraldine and Melvin Kerley of Carlton, TX.

Died: Roy J. Sonnleitner, a longtime resident of Central City, died Saturday, December 2nd, at St. Anthony’s Hospital Central in Denver. He was 71. Born April 4, 1918, Sonnleitner and his brother were orphaned at an early age. He was in the U.S. Navy during WWII and was assigned to the USS Utah. He lived through the bombing of Pearl Harbor, and was once president of the Pearl Harbor Veterans Association. After the war, he moved back to Denver, where he attended the University of Denver. He was employed by the U.S. Postal Service, where he spent many years working at the Terminal Annex in Denver. When he was a young man, Sonnleitner enjoyed writing poetry. He married the former Marjorie Bishop, and the couple moved to Central City, where they lived on the Casey. Sonnleitner is survived by his wife, who is in a nursing home; sister in law Mary Rose Sonnleitner, Denver; nephews Tom, Jim, and Michael Sonnleitner, all of Denver; and nieces Jeanne Sonnleitner, Gilpin County, and Carolyn Black, Slipper Rock, PA. Among his close friends was Robbie Jayne of Central City. Graveside services were held at 3 p.m. at Bald Mountain Cemetery. Arrangements were handled by Woods Mortuary in Golden.

Across the Crossroads, by A.F. Mayham: Santa Claus seems to be following the natural trend of increased population as his family has multiplied considerably since the old days when there was just one Santa with his sleigh and reindeer. Most every other corner has a Santa, store windows sport him, and the May Co. skating rink has Santa on ice gliding around. He doesn’t come down the chimney anymore, or stop his team in front of the house while he fills up the stockings hanging from the mantel. Some of his family take to the road right after Thanksgiving. Santa used to give presents; now he stands around and solicits handouts for one thing or another, maybe with his thoughts on a Tom & Jerry or a stiff eggnog. One boy said he had only one more year to go to believe in Santa. The custom originated in Persia centuries ago, but like everything else, custom changes with the times.

One night outside I heard a big clatter, I opened the window to see what was the matter. I gasped as I counted eight frisky reindeer pulling a truck loaded with liquor and beer. The wrinkled old driver had the look of a hick, but I saw it was Santa, tight as a tick. He had pints and quarts in the sack on his back and a breath that would blow a freight train off the track. He was chubby and plump and he tried to stand right, but he didn’t fool me, he was high as a kite. He spoke not a word but went straight to work, and missed half the stockings, the plastered old jerk. Then putting 5 fingers to the end of his nose, he gave me the bird and up he arose. But I heard him burp once with a trace of a leer—Merry Christmas to all and a rousing New Year.

And that’s how it is or was. Pass the liniment and tape—Santa’s in awful shape. And the wind leaves no shadow.

Mrs. May Cassidy left last Thursday for Indianapolis, to visit her daughter and family.

Mrs. Fannie Harper left Monday for California where she will spend the Christmas holidays with her family.

Mr. and Mrs. Verner Haynes entertained at a family dinner last Saturday evening. Twenty-one were present and the evening was spent in merrymaking.

The attractive Christmas tree in the town square was decorated by Melvin and Dowell Blake, who deserve a vote of thanks, as well as the Public Service Co., which donated the electricity.

Miss Kathryn Eccker is the proud owner of a new Rambler car, in which she commutes to her school in Littleton five days a week.

Mr. Frank Fleiss was up from Denver Saturday checking on his house and greeting friends.

Mrs. Ernest Wright entertained Friday afternoon at a birthday party for her six-year-old daughter, Cathye. About 15 little friends and several mothers were present to enjoy the games and refreshments of cake, ice cream, and Kool-Aid.

Dr. William Mark Muchow, president of the Chain O’Mines Company, arrived from Evanston, Illinois, on Monday, accompanied by Count Diegs, of New York, a mining engineer representing an eastern syndicate, who spent the fore part of the week looking over the mines and milling plant of the company, leaving for the east on Tuesday evening.

Word was received here Tuesday from Rollinsville that James E. Lightbourn had been found in his cabin in Rollinsville, Monday, suffering from a slight stroke of paralysis, and was now under care of the Lafevre family. Mr. Lightbourn was found in his cabin Monday by a young man who called on business matters, who found him helpless, one whole side being affected. A doctor from Boulder was summoned, who pronounced his condition due to a slight stroke. Mr. Lightbourn’s many friends in Gilpin County hope for a speedy recovery.

Died: In Denver, at the home of his son Victor, December 11th, 1929, Mr. Walter Lampshire, aged 68 years. Mr. Lampshire was suffering from a stroke of paralysis which attacked him while he was a resident of this city, a year or more ago, and left him almost helpless. Since going to Denver he had made his home with his son Victor, and was given care and attention in his declining years. He had been a resident of Gilpin County over 40 years, working in the mines and carrying on business matters, and was beloved and esteemed by all who knew him. He is survived by his son Victor, of Denver; two daughters, Mrs. Perley Cox, of Canyon City, and Mrs. James Walter, of Nederland. Funeral services will be held in Denver, and the remains placed beside those of his wife in Fairmount Cemetery.

Thomas Parry, of Russell Gulch, had a close call for his life on Tuesday evening while returning from the Knickerbocker tunnel. His horse backed into a prospect hole and both rider and horse fell a distance of 20 feet. George Menzinger, who was returning home at the same time, saw the accident and went to the aid of Mr. Parry, whom he found to be under the horse and, after some hard work, Mr. Parry was rescued, and later the horse. Mr. Parry was taken to his home and Dr. Moore summoned, who found no bones broken but Mr. Parry was considerably bruised up, and unless complications develop, he will be out in a few days.

Mrs. N. Millett, of the Teller House, left for Denver Friday afternoon to visit with friends for a few days.

Frank Mayhew, of Nevadaville, delivered the two big drums of the hoister for the California Mine on Friday, which was a hard job, in more ways than one. Each drum weighed 11 tons, but he succeeded in getting them to the shaft house without accident.

The Hidden Treasure Mine on Quartz Hill, had just received a new 375 gallon water bucket, and the same has been put into active use in unwatering the mine. At the California Mine, the eastern extension of the Hidden Treasure, the foundation for the big hoister is progressing most favorably, and will soon be ready to be put in place. As soon as lumber and timbers arrive, work will commence on the new shaft house, and will be rushed to completion as fast as possible.

At the site of the new 80 stamp mill, which is being built at Black Hawk for the Boston & Denver M. & M. Company, operating the Bobtail-Gregory Mines, the large timbers for the foundation have been set, and the work of filling in with the rock dump from the incline shaft is about finished, making a first class foundation in every respect. Lumber is beginning to arrive and R.T. Owen, who has full charge in the erection of the mill, expects to get fairly started by the first of the week.

Coal oil was retailing at one dollar for the gallon in this city.

There was a grand celebration at Evans, Colorado, on Monday night, the occasion being the completion of the D.P. Railroad to that town.

Mr. and Mrs. A.N. Rogers returned the first of the week from the east.

The building of a railroad from the valley to the mining districts of Gilpin and Clear Creek counties was receiving considerably attention. Two routes were reported feasible, the Clear Creek and Coal Creek routes.

Mr. A.W. Harris had the thumb of his left hand nearly crushed off under a stamp at Potter & Hawley’s stamp mill in Nevadaville.

A social party was given by the young folks of Nevadaville on Thursday evening, the proceeds going to pay for the organ used in the Good Templar’s Hall.

Mr. L.W. Chase had just returned from a business trip in the east.

Died: A serious accident happened to Mrs. M. Kirtley on Wednesday morning, which resulted in her death. She was living with her son-in-law, Joseph A. Thatcher on Casey Avenue, and while standing on the porch, leaning over and feeding her chickens, she fell over the railing to the ground below, breaking her neck and causing instant death. Her remains were sent to Sacramento, California, for burial beside her husband.

END_OF_DOCUMENT_TOKEN_TO_BE_REPLACED

Benefitting the county, schools, and much more By Don Ireland   This year marks the 30th anniversary of casinos opening in the former little mining towns of Black Hawk, Central City and Cripple Creek, Colorado. In those early years, smoking was allowed inside ... END_OF_DOCUMENT_TOKEN_TO_BE_REPLACED