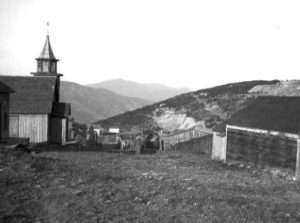 Three large marijuana plants, eight seedlings, and numerous items of drug paraphernalia were confiscated October 18 by Gilpin County Sheriff’s officers in a raid. One person was arrested, and charges are expected to be filed by the District Attorney’s Office on Monday. The next day, Sheriff Rosetta Anderle and deputies executed another drug warrant on BlueSpruce Road. The officers broke down the door when the person inside refused to allow them in after they identified themselves. Eighteen marijuana plants and 81 items of evidence were taken in the raid at what was described by the Sheriff’s Office as “a sophisticated growing operation.” Two vehicles also were confiscated, and the Sheriff’s Office is considering filing a public nuisance for forfeiture suit on these vehicles. Charges of marijuana cultivation and possession of paraphernalia were filed against the Blue Spruce resident. Investigation continues in both cases, and additional arrests are possible. Names are being withheld at this time. Overtime pay for deputies and reserve officers working on these two cases is being funded by a U.S. Drug Enforcement Administration grant specifically intended for the eradication of marijuana.

Born: Congratulations are in order to Robert and Tracy Southworth, who are the proud, but busy, parents of their new daughter, Holly Adriane. Holly was born October 14, 1989, at Lutheran Medical Center weighing eight pounds 15 ounces, and was 21 inches in length. What makes the Southworth family even busier than usual with the arrival of a new little one, is that Holly’s older brother, Ryan, is only 18 months old. The proud paternal grandmother is Artie Clemens of Denver. Paternal great-grandparents are Chester Latham of Denver, and Merle and Nona Southworth of Colorado Springs. Maternal grandmother Pamela Magoun lives in South Weymouth, Massachusetts, and maternal great-grandmother Elizabeth Magoun is from Westbrook, Connecticut. The Southworth family resides in Gilpin Gardens.

Died: Charles J. O’Brien, Jr., of Denver, died October 5, 1989, in a traffic accident in Altoona, Pennsylvania. His wife Jean was injured in the accident when the car driven by her husband was struck broadside by another vehicle. O’Brien was well known in the Central City area for his many years of promoting the city. He was employed as public relations representative for First National Bank of Golden during the 1960s, and was instrumental in organizing the highly successful “On to Central City Parade” held in Denver in conjunction with the Central City Opera. O’Brien was a patron of the Central City Jazz Festival from its inception. As always, he attended this year’s festival. He served from 1985 until recently on Denver’s St. Patrick’s Day Parade Committee. A native of Altoona, O’Brien was born there May 4, 1920. At the time of his death he was employed as a part-time sales representative by the American Automobile Association. In addition to his wife, Jean, he is survived by a daughter, Edrie Ann O’Brien of Wheat Ridge, CO; a son, Charles J. O’Brien III of Lakewood, CO; a brother Thomas H. O’Brien, Rockville, Maryland; and two grandchildren. Mass was held Thursday at 2 p.m., at Holy Ghost Catholic Church. Private services were held at Fort Logan Cemetery.

Across the Crossroads, by A.F. Mayham: Man’s likes and dislikes are often similar to a frisky horse, they should be curbed. Someone has decided that China has a right to take Formosa. Of course, that someone is entitled to his opinion but, if the opinion prevails strong enough, it could set off another war. Cold wars are promulgated constantly in our own lives and the devilry of the young fry are good examples of molestation of other people’s property. If not curbed by parental discipline, the spirit of “chicken” gets the youngsters into trouble and the parents in an embarrassing position—too late. Uncle Ed is still, maybe old fashioned, of the opinion that discipline in the schools, with corporal punishment attached, is best for the country. He reasons that, in an age for good reasoning and poor judgement, for sound rules and corrupt manners, when virtue fills the head but vice the heart, when those who would fain persuade us that they are quite sure of Heaven appear in no great hurry to get there, but put on the livery of the best master only to serve the worst; in an age when modesty is more ashamed of detection than delinquency; when independence of principle consists in having no principle on which to depend, and free thinking, not in thinking freely but in being free from thinking; in an age when patriots will hold anything except their tongues and lose nothing, patiently except their character—to improve such an age must be difficult to instruct it, dangerous, and he stands no chance of amending it who cannot at the same time amuse it. We do a lot of talking, both nationally and locally, but when applied, the medicine may be too late; the disease has gained ground through delay.

The City of Central has purchased a new Willys Jeep, and the same was put in service Tuesday morning. This particular piece of machinery is equipped with a snowplow, a steel cable of 150 feet, and various other necessities; it is a four-wheel drive, and will be a decided improvement over the old pickup truck that has been used or the past six years. We noticed Water and Street Commissioner Joe Menegatti and Alderman Russell putting this new machine to a test by trying to scale the front walls of the Teller House, as it is claimed such a feat would be possible if traction is secured. The City has long needed such a vehicle, and it is hoped it will be put to good use.

A new pipeline has been installed at the courthouse, to replace the one put there when the courthouse was built at the turn of the century. The new pipe is made of copper and should last for the next several hundred years.

Married: Miss Elizabeth Jean Prentice of Black Hawk, and James A. Dillon, of Golden, will be married this Friday evening at Calvary Episcopal Church in Golden. Congratulations!

Extensive improvements were started Monday morning on the Golden Gate Canyon road by order of the county commissioners and under direction of Road Overseer Theodore Koch, who is working a crew of twelve. The road is to be widened at dangerous curves, and other narrow places, and steep grades are to be cut down. The air drill is being used to cut out the rock formations. Work on the road will be continued as long as the weather permits and, after winter sets in, at intervals of favorable weather.

Mr. and Mrs. Roy Goddard, his mother Mrs. Harry Goddard, and brother Edward, and sister Clara of Boulder, Mrs. Ella Holden of Reading, Vermont, and Mrs. George Demster motored up from the valley Sunday afternoon on a short visit in the mountains with friends.

Mr. Earl Quiller, who underwent an operation at St. Luke’s Hospital last week, is reported as getting along fine, and will soon be attending to business again.

Miss Margaret Grutzmacher of Los Angeles, California, is renewing her subscription to the Register Call, says “It is certainly a happy thing to read of all the activity in the county, and we are much enthused about it, and we wish to be remembered to all of our friends.”

Died: One of the last of the very early pioneer miners of this part of Colorado, George Dudley, aged 91, died in Denver the past week and was buried in Fairmount Cemetery. He came to Colorado for the first time in 1862. Ten years later, with his brother, the late Justin H. Dudley, he operated one of the first stamp mills in South Park, near Alma, Colorado, center of a rich silver mining district. Mr. Dudley’s brother was one of Denver’s first four settlers. He built a shack on the site of the city in 1858. He was born in Hannibal, N.Y. April 15, 1838. Mr. Dudley’s only survivor is a daughter, Mrs. Willard H. Ball, with whom he lived in Denver.

Phillip Rohling and son, John, of Black Hawk, left for Golden on Wednesday, too attend the wedding of Miss Agnes Rohling and Mr. John Widman.

The opening recital on the new pipe organ, just installed in the Methodist Church of this city, will be held on Thursday evening, November 2, and Professor Henry Houseley of Denver, of the Royal College of Pipe Organists, has been secured for the occasion. He will be assisted by Mrs. George P. Goodier, Soprano, of Denver, and Mr. I.B. Johns, Tenor, of this city.

The trustees of the St. James Methodist Church have appointed Mrs. S.H. Mians as organist for the new pipe organ, which was recently installed in the church.

William Woods, the shift boss on the Puzzle Mine, was seriously injured on Thursday noon, on account of a stull on which he was working giving way, and he fell a distance of 50 feet. Drs. Abe Ashbaugh, A.C. Asquith, and Bonesteel were called and, on examination, found he had two ribs fractured and was suffering from other internal injuries. His injuries were considered serious.

The Gilpin and Boston Mining Company is sinking its Gladstone shaft with day and night shifts and a depth of 145 feet has been reached. The crevice in the shaft is three feet in width, carrying a streak of smelting ore that assays as high as $2,000 to the ton, with the mill ore returning 3 and one-half ounces gold to the cord. Mr. Joseph Holman is managing the property, with Mike Flynn as mine foreman.

The census recently taken of the people residing in this city between the ages of 5 and 21 years totaled 350.

In the published report of the Rocky Mountain Bank of this city, at the close of business on October 9, the deposits showed a total of $235,644.50.

Alex. McLeod advertised the taking up of a brown ox on the Briggs Ranch, Missouri Gulch.

At the grand lodge meeting of the I.O.O.F., the following were elected grand lodge officers: Robert S. Wilson and James Mills of Central, and James M. Fowler and J.W. Ratliff of Nevadaville.

George M. Collier, a brother of Editor D.C. Collier, of the Register, had arrived from the East to take a position as business manager and collector for the paper.

Died: Mr. B.F. Hurlbut, a well-known resident of Georgetown, while laboring under a fit of temporary insanity, wandered away and was afterward found dead in a furnace.

END_OF_DOCUMENT_TOKEN_TO_BE_REPLACED

Benefitting the county, schools, and much more By Don Ireland   This year marks the 30th anniversary of casinos opening in the former little mining towns of Black Hawk, Central City and Cripple Creek, Colorado. In those early years, smoking was allowed inside ... END_OF_DOCUMENT_TOKEN_TO_BE_REPLACED