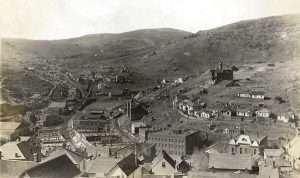 Longtime area resident Norman “Pinkie” Palo was injured in a one car accident in Russell Gulch, Tuesday afternoon. His car was found upside down on the north side of the upper Russell Gulch road, just east of the schoolhouse. Palo, who was trapped inside of the car, was extricated by members of the Gilpin County Ambulance Service, while members of theCentral City Fire Department stood by to provide assistance if needed. Palo, who was airlifted to St. Anthony’s Hospital by Flight for Life, was believed to have suffered head injuries and possibly two broken legs. Palo spoke with a Register-Call reporter on the telephone Thursday morning and said he is able to walk a little, and is ready to leave the hospital. A hospital spokesman said he is doing well, and would be released. Palo, who reportedly was returning from Idaho Springs at the time of the accident, lives in Nevadaville.

School spirit ran high at the Gilpin County Eagles’ homecoming game last Saturday. The Eagles racked up a score of 22-0 for an exhilarating win over the Temple Baptist Tigers. The first half of the game ended with no score by either team. The Eagles registered on the scoreboard with a fumble recovery that was run for a touchdown. The team missed the conversion, ending the third quarter 6-0 after stopping a drive toward the end zone by the Tigers. Chris Harris scored two touchdowns during the fourth quarter, much to the delight of the fans who covered the hillside and urged the Eagles on to victory. Half-time was as American as apple pie, starting with the Eagles marching band. While they performed out on the field, results of the homecoming float competition were announced. This year’s freshmen—class of ’93—won top honors for a float depicting a circus wagon with the theme “Tame the Tigers.” Second place went to the sophomore class. Homecoming Royalty and attendants were presented next. Last year’s Homecoming Queen Jennifer Blake presented this year’s king and queen, Chris Harris and Michelle Unitt, along with their attendants, with flowers as each couple completed a promenade across the field. Homecoming attendants for 1989 are freshmen Cherrie Scott and Chris Thompson, sophomores Leslie Bridges and James Ramsey, juniors Shelby Hayes and Robert Guiney, and seniors Heather Rittenhouse and Kaz Oba. Once the game ended, players and spectators alike looked forward to an evening of festivities for students and alumni.

Across the Crossroads, by A.F. Mayham: Fashions fluctuate and are subject to the changing times or it could be that what we call modernism has an indelible mark on fashions. Milady is the most susceptible specimen of the slave to fashion. When Dame Fashion says the hem goes up, up it goes. When blue, brown, green or beige is to be the season’s color, that’s it. Some of the fair sex, the intellectual type, do not care much for fashion and, if we may say so, some still wear the old-fashioned bloomers, but they are head and shoulders over the fashion slaves. One particularly fine woman who would answer to that description has a world of information in the erudite channels, but she has no man and cares little about dress, but when she sits down to a pipe organ, whether the instrument be a big or little one, listeners cannot keep the tears back; her modulations are out of this world. And, by the way she often manipulates the ivories in Rockefeller Center, N.Y. Nature has a way of compensating in all forms of life, a method to even the score of deficiencies. What the gal lacks in male appeal is more than made up in other categories, but there seems to be nothing that will take the place of “a man” in the fair ladies’ world, which brings to mind the following: There was a lady from Kent/ Who said she knew what they meant/ When asked out to dine/ On caviar and wine/ She knew. How she knew! But she went.

Strolling along Main Street Monday morning, decided a large glass of milk would be decidedly helpful to curb my thirst, so entered the 59’ers Bar for that particular purpose, and also to possibly find out from the various patrons as to what had happened during the week. Glancing at the bartender, that good looking “Shorty” Margerum, he looked half naked, as he had again made acquaintance with a razor, and his face was as clean as a child. In conformity with an idiotic custom during the “Rush to the Rockies” Shorty had allowed his beard to grow in a Van Dyke pointed underbrush, which he considered appropriate and attractive, but now that it has been removed, his wife and girlfriends can kiss him and not think that the kiss is being bestowed on a porcupine.

Miss Alice Ress and Mrs. Charles Anderson were hostesses at a shower last Friday night for Miss Gladys Miller, who will be married on November 1.

Reward Offered: James Murray, who disappeared from his cabin in Gilpin, near Rollinsville, September 23rd, was presumed to be carrying about $300 on his person, either in a money belt or a wallet. This money is offered as a reward to the person finding his body. Any pertinent information should be telephoned to Sheriff Tom Collins, or the undersigned. –Mr. and Mrs. William Neal, Rollinsville, Colorado.

Saturday afternoon, Mr. and Mrs. George Anderle attended the wedding of their niece Miss Fayrene Anderle and Mr. Walter Griffin, both of Golden. The marriage and reception took place at the Chapel of the Angels in Lakewood.

Funeral services for Miss Mary Fleiss were held last Monday at St. John’s Catholic Church in Denver to Mt. Olivet. Her death was the result of a stroke suffered several weeks ago. The only survivor is her brother, Frank J. Fleiss of Black Hawk.

Died: Mrs. Ellen M. Burrell, widow of the late James Burrell, a former well-known resident and attorney of this city, died in Denver on Sunday last, at the age of 81 years. She was 17 years of age when her parents came to Colorado, and settled in Central City late in 1865. Since a few years after the death of her husband, she has been living in Denver.

Died: Charles W. Weldoo, a resident of Moon Gulch and Rollinsville, died in Denver on October 15th, 1929, aged 79 years. He had been a resident of the county for a half century, prospecting the mountains and working in every capacity that came his way. He had no known relatives.

Hugh Williams attended the Grand Lodge meeting of Odd Fellows, held in Cripple Creek, as a delegate from Russell Gulch Lodge No. 41.

The Central City School Board. Have rented the Angove building at Mountain City, for the teaching of the little children in the primary department in that vicinity, and Miss Hattie Lewis has been appointed as teacher.

Mr. W.S. Floyd, of Ralston Creek, left on Saturday accompanied by his two sons, on a visit with his nephew on Eagle County. They went by way of Berthoud Pass, to be absent about three weeks.

Sinking the main shaft on the Cook Mine has been stopped for the present, having reached a depth of 900 feet. The present work force numbers 80 men, and daily shipments are being kept up, which will be maintained at the present rate during the erection of the new mill.

Vincent Forenzeni, a miner working in the Phoenix-Burroughs Mine on Quartz Hill, was struck on the shoulder by a falling plank on Monday morning, which broke his left shoulder. Dr. Asquith was summoned to attend him.

Born: In Central City, October 13th, 1899, to the wife of Charley Nicholls, a daughter.

Married: In Central City, October 18th, 1899, Rev. A. Mackey officiating, Charles A. H. Fuelscher and Miss Katherine Teague, both of this city.

A proclamation was issued by President Grant and Secretary of State Hamilton Fish, recommending that Thursday, November 18, be observed as a day of Thanksgiving.

The Georgetown Miner reported that John Turck had sold his interests in the Equator Mine, near that place, for $100,000.

James D. Wood had been appointed postmaster in this city, as Samuel A. Buell was suspended.

Mayor William Roworth and family left for Janesville, Wisconsin, the first of the week, to be absent until Christmas.

George K. Sabin, W. H. Tappan, H. M. Scarey, John O. Raynolds, H. Long, and W. Critchett were appointed as a committee by the city council to inquire into the amounts of benefits or damages accruing to the owners of property through the widening of Eureka Street.

END_OF_DOCUMENT_TOKEN_TO_BE_REPLACED

Benefitting the county, schools, and much more By Don Ireland   This year marks the 30th anniversary of casinos opening in the former little mining towns of Black Hawk, Central City and Cripple Creek, Colorado. In those early years, smoking was allowed inside ... END_OF_DOCUMENT_TOKEN_TO_BE_REPLACED