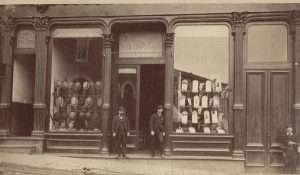 Dumping trash down an open mine shaft may seem a handy and convenient practice, but that isn’t always the case. Gilpin County’s mine rescue team spent part of the last two weekends determining that a shaft on Alps Hill held not a body, but trash. It allstarted Sunday, September 17, when Tom Monaco of Conifer smelled smoke.Monaco, who owns property in Russell Gulch on the side of Alps Hill, walked up to investigate. Toward the top of the hill he saw a woman’s coat caught on the edge of a mine shaft. Two tire tracks led to the edge of the shaft. Search and Rescue was summoned after a sheriff’s deputy examined the site. Although no body was visible, something blue could be seen about 40 feet down, caught on a ledge. If a body had been thrown into the shaft, it could have bounced into a side drift after hitting the bottom. Last Saturday, at 2 p.m., Search and Rescue went up Alps Hill to determine what was in the shaft. Because no one was immediately available to operate the boom truck and safety cage, van Cullar and Steve Yanchunis took 70 feet of ladder up to the shaft. Distances down a shaft can be deceiving, and the ladder was about 80 feet short of the bottom. The shaft, which Cullar and Yanchunis had estimated to be 50 feet deep, was closer to 150 feet deep. So the ladder had to be taken back to the Polar Star Mill and the boom truck brought out. By this time a boom truck operator was located, and the truck was brought up through Nevadaville and across Alps Hill to the site. The truck was maneuvered close enough to the shaft so the cage could be lowered. It required precise positioning because the timbered opening was not much wider than the cage. Because the shaft had a six or seven degree dip, the cage, with Cullar and Yanchunis inside, had to slide down the timber for 20 feet. It then slid the rest on the foot wall. This meant the men had to watch for debris and rock that the cable might knock loose. Though only two men, Cullar and Yanchunis, went down the shaft, team members on the surface all had jobs to do. Then around 6 p.m., the team determined that it was a trash dump they were investigating, not a body disposal. Household trash, clothing, and construction materials were found at the bottom of the shaft. Foul play had been considered a possibility because, in the past when a body has been dropped down a shaft, the victim’s personal belongings have often been disposed of at the same time. The coat caught on the edge of the shaft was suspicious enough to call for an investigation. Since the equipment was already in place, rescue workers held a practice session. The team headed down the hill at about 8 p.m. While everyone was pleased that nothing more serious was found, no one is ever thrilled to spend a Saturday afternoon checking out a trash dump.

Across the Crossroads, by A.F. Mayham: When Mother Nature created life and made one form dependent on another form for sustenance, she also made man something like a tree, and we often judge a man by his bark. Demise, that transition through which all life has to pass, except maybe what’s on the other side of the moon, is a release. We will soon know about that as a satellite is now encircling our satellite moon taking pictures of what we can’t see. Barking by politicians passed with the horse and buggy. Even country doctors and lawyers have discarded the horse drawn shay, but doctors and lawyers still exist in spite of errors. One lawyer drew up his last will and testament leaving everything to fools and madmen. Asked why he did so, he said “from those he got it and to such I give it back.” One of Uncle Ed’s old cronies wouldn’t take the doctor’s advice—said he wanted to die a natural death. Conditions like those are found everywhere and add to the spice of life—and it’s all bark. Ed’s bygone girlfriend recently received the milk check from her grandfather and went to the bank, where she was unknown, to get it cashed. Asked if she had any identification, she said yes, I have a mole just above the waistline. The bark is also found in union discussions. The 8 cent an hour increase was received with thumbs down as some said that was not even sweating wages in the steel strike. Another raise only means more inflation and a step nearer a financial “bust up” for the barkers.

The search for James Murray, Sr. goes on in the snow covered and timbered mountain country, but friends and officials are convinced he is dead. Sheriff Tom Collins of Gilpin County said on Saturday that, “We’re just letting nature help us now—we’ve got a couple of men up there from time to time looking for birds and coyotes.” Although organized search parties could not find Murray’s body in several days of searching after the elderly man’s disappearance on September 23, “the birds and coyotes will find him if he’s there,” Collins said. He believes it most likely that Murray wandered off from his cabin and died in the isolated mountains, Collins said, “but I haven’t eliminated the possibility of foul play.” So far, however, there has not been a single clue to support that theory, the sheriff said. Murray, who lived alone in the cabin he built for himself near Rollinsville, was known to carry his life savings—about $300—with him at all times. Collins said that two Rollinsville men, Art Crow and his son, Bob, are making periodic searches of the area on snowshoes. “If they don’t find him in the next month, he’s just not in the area,” Collins said.

Married: Mr. and Mrs. Carl Skagerberg announce the marriage of their daughter, Marjorie Catherine, too William Salzwedel, son of Mr. and Mrs. Walter Salzwedel of Billings, Montana. The marriage took place on October 8th, 1959, at the Park Hill Methodist Church in Denver. The bride is a graduate of Gilpin County High School, and has attended Colorado University, Colorado State University at Greeley, New York City College, and is continuing her studies at C.U. Extension. Both Bill and Marjorie were members of the summer stock at the Magic Circle Theater in Colorado Springs last summer. The groom was graduated from Denver University this last June, where he was judged the best actor of the year. He was a member of the cast of “And Perhaps Happiness” with the Central City Opera Association in 1957. The couple is living in Denver.

Charles H. Gage and wife, who have been enjoying a month’s visit throughout the East visiting relatives and attending to business matters, returned home on Saturday last.

Elias Watson, an old-time resident of Gilpin County, was visiting Central friends on Sunday last. He drove up via Virginia Canyon, and in making the turn into the new highway road, the auto was upset and he was badly shaken as a result.

Fred McFarlane and wife were up from Denver Sunday, on an outing and to visit with relatives, returning home during the afternoon.

How to Make Oyster Shortcake, by Nellie Maxwell: Make a shortcake in thinner layers than the usual cake. Split, spread with butter generously, as soon as baked. Cook the oysters in their own liquor until they curl, and arrange them on the cake; cover with a thick white sauce using the liquor and cream with butter and flour added to thicken.

The working force on the Topeka Mine in Russell District, numbers about a dozen men, most of who are doing development work, but this force will soon be considerably increased. The new manager is expected here in a few days, and it is reported that the new machinery has all been ordered, so that the prospects look encouraging for this property being operated on a large scale in the near future.

A Russell Gulch pool has made a good strike in the Last Chance, or Bushwhacker claims on Quartz Hill, lying north of the Alps Mine. Drifting has been started in the east and west 155 foot levels, the former showing up a good sized streak of yellow copper and lead, which carries values of over $100 per ton. The pay streak has just been cut in the west drift, and the lessees are now taking out some ore with a view of sending a shipment to the sampling works this week.

Sinking was commenced Monday night at the Gladstone property of the Boston Mining Company. The shaft is about 130 feet deep and it will be sunk 50 feet further at once, the work to be carried on with day and night shifts. The property is being looked after by Mr. J.W. Holman.

The old Bobtail Mill is being torn down, and on its site will be erected an 80 or 100 stamp mill, at an estimated cost of close to $100,000. The contract for the mill has been given to Hendrl & Bolthoff of Denver, who have a big force of men working on the foundation. The mill building will be built in three terraces, and will cover an area of about 70×220 feet. The mill will be equipped with stamps weighing 1,000 pounds, dropping 90 times per minute, of the fast drop pattern, and will crush considerably more ore daily than is possible with the slow drop stamps. Below the stamps will be installed 24 Woodbury tables to take care of the tailings of concentrates. The machinery will consist of one Cordless engine of 200 horsepower, four 100 horsepower boilers, and a large electric light plant. The 50 stamps in use at the present time will be kept running on ore until the east end of the building is completed, as the company intends to keep up production from the mine and lose as little time as possible.

Died: George Tritch, one of the pioneers of Colorado, and one of the best known businessmen of Denver, died at his residence on Sunday last, at the age of 70 years. He left an estate valued at two million dollars.

Mr. L.W. Chase was a passenger to the east on Saturday, on business matters, and to visit with relatives.

END_OF_DOCUMENT_TOKEN_TO_BE_REPLACED

Where the dead get to tell their story By Jaclyn Schrock On Saturday, August 21, the Gilpin Historical Society held their annual Cemetery Crawl. Tickets allowed the shuttle of hundreds of guests from the Teller House parking lot to the Cemetery. Depending on v... END_OF_DOCUMENT_TOKEN_TO_BE_REPLACED