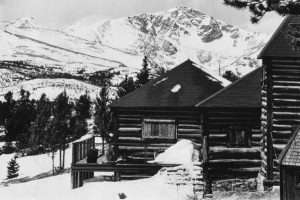 A number of entries have been submitted to the City of Black Hawk for its contest for an emblem to be used by the Marshal’s Office and possibly by the city as well. The entries were presented to the board at the December 13 meeting, but no decision was made at that time. The winner will be announced after the January 10 meeting.

Christmas around the world was the theme of the 10th annual Gilpin County School concert on December 13. Parents and guests alike attending the performance were entertained with a variety of music, songs, and a Christmas play from around the world. The second graders performed an animated rendition of “The Twelve Days of Christmas,” which featured large cutouts of partridges, pear trees, swans a-swimming, and all the rest. They were rewarded with whistles, cheers, and a standing ovation. The first grade class sang the Christmas carol, “We Wish You and Merry Christmas,” while displaying a large banner presenting the same sentiments.

The Christmas Spirit, by Mary Taitt: Breathes there a man with soul so dead as to take one’s paper, still unread? It happened here on Fourth High, December 18th, as my morning coffee swirled around my teeth. A blonde young person in a black jacket walked ahead and snatched it, and got into the family’s Ford truck. Gray on gray it was, filled with kids and tuck. The license I know, but will reserve in the hope it will hurt his nerve. So my paper can be thrown through the year, I’m glad that’s all we’ve lost so far!

Someone reportedly set off a smoke bomb beneath the Christmas tree at the intersection of Main and Lawrence Streets. It was initially believed the tree was ablaze.

Died: The community is saddened at the loss of Thomas “Tom” W. Hagen of Apex Valley, who died at his home on December 20, 1988. Funeral services will be held at 2:00 p.m., today, December 23, at Evergreen Memorial, in Evergreen. Employees at the Register-Call wish to extend their sympathies to Tom’s wife, Claire Hagen.

How many of us are waiting for the opportunities of the coming year? With how many of us is it the unbuttered hope that tomorrow, next week, next month, the next year may be as today in its privileges and opportunities, only far more abundant. We are told that the first day of the New Year is an appropriate time to form good resolutions. But the New Year was yesterday and there is a better time for such a task, and that time is today. For now is the acceptance of time. The joy of living is best found in the real success of life. Take away success ad there’s no joy in life to one alive to opportunities and responsibilities. No live man is satisfied with mere existence, for he wants to contribute something to the world’s progress, the world’s good. And it is in such contribution that real joy is found, the satisfaction that comes from real realization that one has done what he could in the year give him. So that is the joy the Weekly Register-Call wishes every reader may have if they fully appreciate that the New Year is theirs, to make it truly a Happy New Year!

Old King Boreas dropped nearly a foot of the white mantle on Saturday and Sunday, and instead of having a white Christmas, we now have a white New Year’s Day. Temperatures Monday night dropped from five to ten degrees below zero, but the following day, Old Sol appeared in all his splendor, and the icy thoroughfares are again showing the original blacktop and dirt on the streets.

Died: Funeral services were held December 17th, 1958 at South Gate, California, for Florence Granville Anderson, with interment in Inglewood Park Cemetery. Florence was born in Central City, May 1898, was married to John Anderson in 1916, and left here some ten years later to make her residence in California. She is survived by her husband, one son, and three daughters.

Died: Raymond L. Ramstetter, a nephew of Mayor George Ramstetter, died Christmas Eve in Golden, with funeral services from the Wood’s Mortuary, of Golden, with interment in the Arvada Cemetery.

Mr. Henry Placek, our school bus driver, left by plane Saturday for the state of Washington to visit his sister during the holiday season.

Mr. Charles Koltes, engineer for the Bureau of Public Roads, was a weekend guest of Mr. and Mrs. Evan Jacobson.

Mrs. Luella Fritz spent Chromes in Denver with her daughter and family, the Dallas Howards.

Frank Bennett, son of Mrs. Hazel Rudolph, recently purchased a small airplane and on Wednesday flew here from Fort Collins, landing in an open meadow just south of Rudolph Ranch. He made the trip in 45 minutes and returned to Fort Collins the same day.

Carol and Shirley Barker have moved their trailer house to Cortez, Colorado, where Carol has employment.

Mr. Nick Johns came up from Denver Sunday evening, where he had been taking treatment, to spend Christmas at the old home with relatives and friends.

Mr. J.H. Jenks returned from Bland, New Mexico, Friday, to look after his mining interests in the Coeur d’Alene Mine, in this city.

Mr and Mrs. W.O. Jenkins left for Denver Christmas morning to spend the day with their son Walter and wife, returning home during the evening hours.

Commencing yesterday, there was a complete change in the operation of the Teller House and the restaurant connected therewith, which has been conducted by Mrs. M. Bennett, the lease and management of the former having been secured from Mr. Teller by Mrs. Lawrence, of Los Angeles, the latter by Mr. Gibson, an experienced chef of Seattle, Washington.

Married: In Central City, December 22nd, 1928, County Judge Louis J. Carter officiating, Daniel Webber, of Denver, and Miss Hughretta Hughes, of Russell Gulch. This announcement will come as a great surprise to many residents of the county who are anxious to extend congratulations and best wishes for a long and happy future. The young lady has been filling a responsible position at the court house for the past couple of years, and had endeared herself to everyone by her pleasing manners and kindly greetings that were always appreciated. The couple will make their home in Denver, where Mr. Webber holds a responsible position.

Died: In Central City, December 21st, 1928, Horatio E. Hazard, aged 79 years and 10 months. Deceased was a pioneer of Gilpin County and the state, coming from the east in 1872. His brother, Morris came to Colorado in 1871. For years the brothers lived in Russell and Leavenworth Gulches, where they followed mining, and later made this city their home, where the former served as bailiff of the district court for many years, while the latter was clerk of the court for over 30 years. For many years the deceased suffered from bronchitis, and was always prepared to tell of a change in weather conditions due to his affliction, the change causing increased suffering. He was always cheerful, always hopeful, and had a most pleasant word of greeting, regardless of how bad he felt, which endeared him to everyone who came in contact with him. He was a member of Central Lodge No. 6, Order of Masons, and funeral services were held in the Masonic Lodge room Sunday afternoon, interment Monday morning at Crown Hill Cemetery, Denver, with masonic burial services.

Mr. Neil McKay lost another valuable horse Monday evening. It was the mate to the one that was killed by falling into an old shaft on Bobtail Hill, two weeks ago.

Miss Vernie Kimber, sister of Benjamin and Harry Kimber, of Black Hawk, arrived from Santa Barbara, California, last week, on a visit. Miss Kimber left with her parents for California some eighteen years ago, and this is her first visit at the old home in Chase Gulch, in that time.

At the Episcopal, Methodist, and Presbyterian Churches in this city, the children were all given presents from the Christmas trees which had been planted there for the occasion, and appropriate programs were rendered.

There were 565 stamps dropping in the mills of the county during the year, working day and night, with all but 50 of them in Black Hawk. The two outside mills being the Vendome, at Nevadaville, of 30 stamps, and the Procuniur, at Wide Awake. The Black Hawk mills were the Hidden Treasure, with 85 stamps; Mead, 40; Polar Star, 40; Eagle, 35; Gregory-Bobtail, 75; Gilpin, 50; New York, 70; Randolph, 50; Iron City, 25; and Penn, 45. The Kansas Mill at Nevadaville, of 40 stamps, and the Elk Park mills were not in continuous operation during the year, and were not included in the above list. Of the above number of stamps, 130 were of the fast-drop pattern, and the balance slow-drop. The fast-drop crushed from two to three tons per day, and the slow-drop averaged one ton, making a total of at least 750 tons crushed daily. Add to these figures 75 tons treated daily at the concentrator, 150 tons at the sampling works, and the figures will show that close to 1,000 tons of ore per day are being produced from our mines and taken care of in the reduction plants in the county.

During the year there was more high grade and free gold ore shaped from the mines of the county than ever before known, and the discoveries in that line are improving with development. The several discoveries made in the Topeka Mine, in Russell District, are among the greatest ever made in the state, and shipments made to the smelters have returned from $1,000 to $40,000 to the ton and at present writing the body of ore, and the stress of gold running through it, are larger and better than ever before. The East Nottaway Mine, in Lake District, also came to the front with shipments of high grade mineral, some of the ore running as high as $7,000 to the ton. This mine had been idle for 43 years, until the present operators took a lease on it, and with development, opened up the rich ore.

President Grant’s amnesty proclamation was issued on Saturday, December 25, and included a full pardon to Jeff Davis and all others who were engaged in the rebellion.

Indians were reported to have made their appearance on the U.P. Railroad at Laramie, WY, and that depredations had been resumed in that section.

The basement of the Methodist Church was completed and would be ready for occupancy on Sunday. The room was larger and better than the court room, where former services were held.

Ed. Bainbridge, who was lynched at Georgetown, had returned in the form of a spirit or ghost, and was making things very interesting for the people living near the house where he was hanged, and most of them scared out of their wits.

END_OF_DOCUMENT_TOKEN_TO_BE_REPLACED

Benefitting the county, schools, and much more By Don Ireland   This year marks the 30th anniversary of casinos opening in the former little mining towns of Black Hawk, Central City and Cripple Creek, Colorado. In those early years, smoking was allowed inside ... END_OF_DOCUMENT_TOKEN_TO_BE_REPLACED