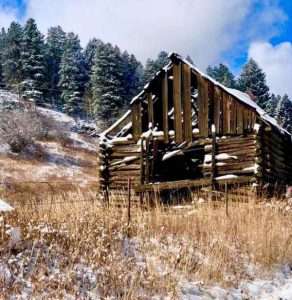 The annual Christmases Remembered Festival will be held on November 25, 26, and 27. This annual festival recalls the days of Christmases long ago with handcrafted items, hot cider, roasted chestnuts, caroling, and old fashioned decorations adorning homes and businesses. This year, an event has been added to the festival for children of all ages. A funcarnival including games, prizes, and face painting will be held at 118 Lawrence Street, from 11:00 a.m. to 5:00 p.m. on Saturday and Sunday. Children of all ages are welcome. The Victorian Shopping bazaar will be held at the Gilpin County Community Center on Lawrence Street all three days of the festival. Friday and Saturday the bazaar will be open from 10:00 a.m. to 6:00 p.m., and Sunday the bazaar will be open from 10:00 a.m. to 3:00 p.m. Santa Claus will be on parade in the Central City antique fire truck at 12:30 p.m. daily. The second annual Holiday Home Tour will feature beautifully decorated homes, which will be open for public viewing on November 25 and 26. One ticket allows admission to all of the houses. March of the Singing Children will be held on Saturday, November 26, starting at 5:00 p.m. Children of all ages should plan to meet at Raynold’s Court on Lawrence Street. Hot chocolate and cookies will be served afterward at the Gold Coin on Main Street. All children are welcome to participate. A Christmases Remembered musical will be held at St. James United Methodist Church on Sunday at 12:30 p.m. The magnificent St. James organ will be played by Pat McHenry, accompanied by Fran Cooke, soprano, and Naomi Fellows on the viola. The St. James Choir will lead the audience in carol singing. A Christmas reading will be done by Pat Wendleton. Everyone is welcome!

Happy Birthday to Martha Logan of Rollinsville, who celebrated her 99th birthday on Wednesday. She was honored during the PAC spaghetti fund raiser at Phyllis and Don Howe’s home on Thursday. From the entire staff at the Register-Call – Happy Birthday!

John Rittenhouse, school superintendent, will moderate the boardsmanship workshop, “Cooperation or Confrontation: Building Consensus with Your Fellow Board Members.”

Patricia Dunn, school board member, will moderate the seminar, “At-Risk Youth: How One District is Successfully Combatting the Drop-Out Problem.

Died: W. Russell Lovingier: W. Russell Lovingier, Jr. passed away in Eckley, Colorado, on November 5, 1988. He was 74 years old. He was the son of William R. Lovingier, Sr., and Lillian Lovely Lovingier. W. Russell Lovingier lived most of his adult life in Naperville, Illinois, and lived there until his retirement in 1984. He retired from his own business as a certified public accountant. Following retirement, he moved to Montana to be close to his daughter Marsha. After living in Montana, he moved to Colorado, where for the last two years he divided his time between Black Hawk and Eckley, where he resided. Lovingier enjoyed square dancing, especially while living in Naperville, and was in many square dancing clubs. In Illinois and Colorado he enjoyed bicycling, and was a member of several clubs, as well as participating in road and century races and bicycling tours. He was preceded in death by his parents and two brothers. Survivors include his son, Bill Lovingier, of Black Hawk; two daughters, Cherise Merrick of Colorado Springs, and Marsha Stoddard of Missoula, Montana; his brother, Fred Lovingier of Portland, Oregon; his sister Mary Elizabeth Fortman of Hayward, California; six grandsons and three granddaughters. Graveside services were held at Dory Hill Cemetery on November 10, 1988. His children, Cherise, Bill, and Marsha, officiated. Interment was at Dory Hill Cemetery. Services were handled by Vince and Teri Hennigan of Romford Mortuary.

Across the Crossroads, by A.F. Mayham: A stomach or intestinal flu has been making a nuisance of itself lately, keeping the cream of the office forces sitting pretty, but not at the office. The malady has a lassitude action on the limbs, thick head, although some people are naturally thick-headed, bull-headed, with the I.Q. of a 13 year old, sour stomach and loss of appetite. What one eats goes down, comes half way back up and then goes down again. Ed says he knows of lots of things that are more pleasant, and maybe other people do also.

Mrs. Amy Champion Hoshin Hill, daughter of Samuel and Lillie Hoskin, paid this office a welcome call last Friday for the purpose of scanning the files of the Register-Call. She was born in Mountain City in 1891, and for the past seven years has been a resident of California. She and her children and grandchildren are now operating the Sea Downs Resort, at Stinson Beach, California.

A bus load of visitors from England were in Central City on Tuesday. They visited each and every place of business and spent a most interesting day.

Mrs. George Eustice was on the sick list last week, but is much improved.

Business visitors in town Thursday were Mr. and Mrs. Clyde Raymond of Rollinsville.

Mrs. Ethel States returned last week from a Denver hospital where she had been recuperating from an attack of pneumonia.

Mr. and Mrs. Junior Nelson and baby were here from Walden last Saturday.

Sam Redman will eat turkey this Thursday with his daughter and son in law, Mr. and Mrs. Red Jackson in Idaho Springs.

Mr. W.D. Mateer, geologist from the School of Mines, was in town Sunday gathering data on various mines in this vicinity.

We are glad to see Otto O. Blake home from the hospital and able to drive after the injury to his hand in a power saw.

Up Nevada Gulch near the Central City depot, the Chain O Mines Company has completed a 250 ton Amalgamation Flotation Mill, and a 500 ton Cyanide Unit is already under construction and should be completed sometime in February. Total cost of these plants amounts to nearly a half million dollars. This company has purchased all of the claims which comprise or cover that phenomenal gold crater famously known as “The Patch,” on Quartz Hill. This particular ground differs from all of the other mines in the district. The Patch has no veins, but is entirely comprised of stock work, (a one-time tremendous explosion), now a mass of ore very soft in texture containing gold, silver, zinc, lead and copper, and some radium. Size of this tremendous ore body is approximately 1,000 by 500 feet.

A Joke: Gossip had it that Gagge was crazy on amateur theatricals, but such was not the case, and Gagge tried hard to deny the rumor. “But,” said a friend in the club, “you are always in these amateur plays. You’ve played all sorts of parts in the last six months. If you don’t like it, what do you do it all for?” Another man spoke. “Yes,” he agreed, “How is it that you never seem to be tired of appearing in every private theatrical performance?’ “I do get tired of it,” protested Gagge. “As a matter of fact, I’m sick of the whole thing, but if I’m not on the stage I shall have to sit in the audience!”

In the front window at Borzago & Company’s store will be seen a copper ingot, weighing 118 pounds, being one of the many that were being loaded at the depot on Wednesday, coming from the electric smelter at Apex, from ore from the Evergreen Mine. It is a beauty and well worth seeing.

A carload of blister copper weighing 18 tons, from the Evergreen electric smelter at Apex, was being loaded at the depot on Wednesday for shipment to Denver. Each one of the ingots weighed from 100 to 120 pounds, and was the result of a test run at the smelter, after which the smelter closed down until May of next year.

The Gilpin County contingent of soldier boys, who have lately been stationed at Honolulu, are now, in all probability, well on their way to the Philippine Islands. Charley Earns of this city received a postal card on Tuesday from his brother J.E. Karns, saying they expected to leave for that point on the 7th of November.

Mrs. Thomas McNicholas, of Nevadaville, was thrown out of a cart Sunday morning, sustaining a slight fracture of the left arm at the wrist.

At the California Mine, on Quartz Hill, the present work being carried on is in overhauling and putting in shape the big plant of machinery over the main shaft on that property. Two boilers are being fitted up with new flues, and two new hoisting ropes have been ordered. Jack Lyng is in charge of the work, and it is expected that by the first of the year the plant will be in first class running order.

The First National Kansas Mine, on Quartz Hill, is being operated by the First National Leasing Company, and the working force number 30 men. Work is being carried on in the 4th, 5th, 6th, and 7th levels, west of the shaft, and considerable mill ore is being hoisted daily, which returns 3 ounces gold to the cord in the stamp mills. The main shaft has a depth of 650.

The Pierce Mine, on Nevada Street, is producing heavily these days, the daily shines averaging between 30 and 40 tons. The mill ore is being treated in the Hidden Treasure Mill and returns from three to four ounces gold to the cord, while the smelting product returns $75 to the ton.

Sinking operations have been resumed at the Queen of the West property in Chase Gulch, and on the completion of present contract, the shaft will be 700 feet in depth. A branch from the Gilpin Tramway line will be run to the shaft house, so that shipments can be made over that line to the mills in Black Hawk.

Married: In Central City, at the residence of the bride’s parents, November 19th, 1898, James Mitchell and Miss Freda Sonnatag, both of Central City.

Sessler & Sauer advertised the arrival of five barrels of pure wine, and 1,000 pounds of Sweitzer cheese – a good pair to draw to.

A silver button weighing 1 ounce and 6 pennyweights taken from 1 ounce and 17 pennyweights of ore from the Copley Mine, owned by Robert Tears, indicated a yield of $26,127.40 per ton, which was the largest assay of silver ore ever made by assayer Burlingame.

A festival was given in the newly completed Methodist Church building Wednesday evening, the net proceeds amounting to $675.

Considerable space was given in the Denver papers of details of the accidental killing of Miles Hill, at Golden City, while trying to arrest three desperadoes. Of the three, Franklin was killed while resisting arrest; Musgove was captured and afterwards hanged from the Larimer Street bridge, Denver, but Dugan made his escape.

END_OF_DOCUMENT_TOKEN_TO_BE_REPLACED

Where the dead get to tell their story By Jaclyn Schrock On Saturday, August 21, the Gilpin Historical Society held their annual Cemetery Crawl. Tickets allowed the shuttle of hundreds of guests from the Teller House parking lot to the Cemetery. Depending on v... END_OF_DOCUMENT_TOKEN_TO_BE_REPLACED